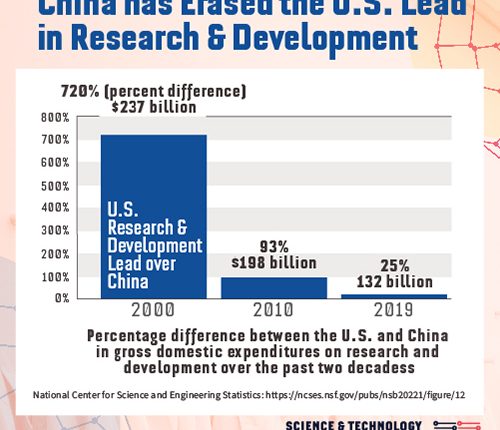 Editor’s Note: Morning Tech is a free version of POLITICO Pro Technology’s morning newsletter, which is delivered to our subscribers each morning at 6 a.m. The POLITICO Pro platform combines the news you need with tools you can use to take action on the day’s biggest stories. Act on the news with POLITICO Pro.

— New target for trustbusters: Google’s proposed acquisition of cybersecurity company Mandiant could face an antitrust challenge from the Department of Justice.

— Get on with it: Lawmakers in both parties are increasingly frustrated with congressional leadership for delaying passage of $52 billion in subsidies for the chip industry.

IT’S WEDNESDAY, MARCH 9. Welcome to Morning Tech! Well, that was a fun little false spring — I know one Washingtonian in particular who enjoyed it very much. Now back to shivering, for a little longer at least.

Scoops? Tips? Thoughts? Dog (or cat) pics? Send any and all by email to [email protected], or via Twitter DM to @BrendanBordelon. Got an event for our calendar? Send details to [email protected]. Anything else? Team info below. And don’t forget: Add @MorningTech and @PoliticoPro on Twitter.

U.S. Science & Tech Investment is Less than Half its High-Water Point. In 1964, at the peak of the space race, federal spending on science and technology made up 1.9% of GDP. Today it’s just 0.7%. As we confront existential threats like climate change, it’s time to reinvest in science. How do we get future ready? Find out here.

DEAL OR NO DEAL? Google’s planned $5.4 billion acquisition of cybersecurity giant Mandiant would be the second-largest in the company’s history. But will federal regulators let it proceed?

— Antitrust activists hope not: Krista Brown, a senior policy analyst at the American Economic Liberties Project, said in a statement that Google’s purchase of Mandiant would grant the sprawling tech company “control of the cybersecurity firm relied on by government agencies and corporations around the world.” Given consolidation elsewhere in the cybersecurity sector, Brown said the acquisition “will only serve to choke off necessary innovation.”

— DOJ steps up: Given its jurisdiction over the broader federal antitrust case against Google, the Justice Department’s Antitrust Division (which splits its antitrust efforts with the Federal Trade Commission) is expected to review the company’s planned acquisition of Mandiant as well.

It’s unclear how division head Jonathan Kanter will view the proposed deal. He previously represented Microsoft and Yelp in antitrust lawsuits against Google — a fact that prompted the search giant to question his impartiality. The DOJ’s Departmental Ethics Office is still reviewing whether Kanter should recuse himself from Google cases — if they decide he should, the case would go to Doha Mekki, Kanter’s No. 2 at the division, who has said there’s “very little daylight” between her and Kanter on antitrust.

— What we’re watching: Whether regulators block the Mandiant deal may depend on if they see the cybersecurity firm as a competitor to Google, which already offers cybersecurity services and maintains a threat intelligence team.

Adam Kovacevich, the head of tech industry group Chamber of Progress and a previous leader of Google’s U.S. policy team, told Morning Cybersecurity’s Sam Sabin that the acquisition was more of a “vertical deal” than a “horizontal” one, with Google buying a company that isn’t a direct rival. But even that may not be enough to assuage regulators — the FTC, under the leadership of new Chair Lina Khan, has recently taken a harder look at the potential dangers of vertical deals.

CONGRESS RESTLESS OVER CHIP FUNDING DELAY: More than a quarter of all lawmakers in Congress have sent a letter to House and Senate leadership urging them to pick up the pace on $52 billion in subsidies for the microchip industry, which await a conference committee over the broader competitiveness package to which they’re attached.

“We must move with urgency to secure this funding to create well-paying jobs and support workers and their families at new and existing facilities,” said Reps. Doris Matsui (D-Calif.) and Michael McCaul (R-Texas), who wrote on behalf of the broader group of lawmakers, together with their Senate counterparts Mark Warner (D-Va.), John Cornyn (R-Texas) and Mark Kelly (D-Ariz.). The lawmakers pushed leadership to “preserve the full $52 billion” as part of the conference process, claiming it would help address “severe shortages in the semiconductor supply chain” and reestablish U.S. leadership in global chip manufacturing.

Spokespeople for Matsui and a chip lobbying group said there’s no evidence to indicate leadership is interested in shrinking the subsidies. Matsui spokesperson George Hatamiya said the letter is instead meant to light a fire under leadership to begin reconciling the Senate’s U.S. Innovation and Competition Act (S. 1260) with its House-passed rival, the America COMPETES Act (H.R. 4521).

— Assemble the troops: The Tuesday letter was cosigned by 142 lawmakers, including 18 senators. While many were Democrats, a significant number of Republicans also signed on. Nearly the entire Michigan delegation joined the letter — the auto industry has been hit hard by the ongoing chip shortage, and some members have expressed a desire to take successful passage of the subsidies home to their districts ahead of November’s election.

— Still waiting: Lawmakers from both parties are running out of patience for leadership to find a vehicle for the chip subsidies. Under pressure from his colleagues and with the tacit blessing of the chip industry, Senate Majority Leader Chuck Schumer sought in November to shoehorn the Senate’s competitiveness bill into last year’s defense policy bill. But that effort was stymied by Senate Republicans, and angst over the delay has since only grown in both chambers.

— More chip priorities: Sens. Alex Padilla (D-Calif.) and Raphael Warnock (D-Ga.) also sent a letter to Schumer on Tuesday, pushing the majority leader to include in conference House-passed provisions that promote diversity and inclusion in the microchip industry. Black and Hispanic individuals are employed at lower rates by chipmakers — as are women, which in a 2019 survey were found to represent less than one percent of leadership roles at most chip companies.

The letter was also sent to Sen. Commerce Chair Maria Cantwell (D-Wash.), who will play an important role in the conference on the competing House and Senate competitiveness packages (whenever it starts — Padilla spokesperson Sam Mahood told MT Tuesday they’re still waiting on more information from leadership regarding when and how the conference process will proceed).

LEFT ESCALATES BROADBAND PRESSURE ON BIDEN ADMINISTRATION — Sens. Richard Blumenthal (D-Conn.) and Ed Markey (D-Mass.) are ramping up pressure on the Commerce Department to hitch policies like net neutrality onto the $48 billion in broadband infrastructure funds it’s preparing to dole out to states. Such priorities — including greater attention to broadband affordability and workforce standards — would “ensure that these programs are effective, inclusive, and lasting,” the Democratic duo wrote.

— USDA’s cautionary tale: Partisan splits around impending broadband buildout efforts are already cropping up as part of the Department of Agriculture’s separate broadband push. At a Tuesday subcommittee hearing, Republicans on the House Agriculture Committee peppered USDA Undersecretary Xochitl Torres Small with questions about how USDA set up the third round of its ReConnect broadband loan and grant program, which also favored applications that include progressive-friendly obligations like net neutrality.

Subcommittee ranking member G.T. Thompson (R-Pa.) and Rep. Doug LaMalfa (R-Calif.) were among those who questioned the undersecretary on USDA’s decision to favor applications from nonprofits and local governments. The lawmakers suggested USDA didn’t properly consult Congress about these policy choices. Republicans are likely to react at least as aggressively to Markey and Blumenthal’s similar plans for the Commerce Department.

The launch of Truth Social, Trump’s answer to Twitter and other popular social media apps, was supposed to galvanize the right behind a platform that would protect “free speech” for conservatives who — like Trump — fear being suspended or banned from other sites over misleading, false or offensive posts. But so far, few people seem to be interested in the platform.

At last month’s Conservative Political Action Conference in Florida, Truth Social provoked almost no buzz. Top figures in Trumpworld are largely absent from the app, and even Trump himself seems ambivalent — he’s only posted on the platform once since it launched on Feb. 20. The app has also been riddled with technical difficulties, making it tough for users to even join the platform in the first place (read more on Truth Social’s increasingly rocky start from Meridith McGraw and Rebecca for Pros).

Chad DePue is the new vice president of engineering at Uniswap Labs, the main developer responsible for the Uniswap cryptocurrency exchange. He was formerly senior director of engineering at Snap, Inc. … Evan Swarztrauber is a new advisor on tech and telecom policy at the Lincoln Network. Swarztrauber, a former advisor to former Republican FCC Chair Ajit Pai, will retain his position as a director at Clout Public Affairs.

Behind the lidar: The operator of an Uber vehicle that struck and killed a cyclist while in “self-driving” mode in 2018 tells her story to Wired.

Sick of tweet-jail: Tesla CEO Elon Musk asks a federal judge to void his 2018 settlement with the Securities and Exchange Commission that requires some of his tweets to be pre-approved by the commission, according to the Wall Street Journal.

First in MT: Progressive groups aren’t letting up on Commerce Secretary Gina Raimondo for her defense of U.S. tech firms against a new European Union antitrust proposal, with 19 groups calling her “a mouthpiece for big tech in Brussels.”

Clouds (de)parting: Amazon Web Services stopped taking on new cloud-computing customers in Belarus and Russia on Sunday (but only announced the move on Tuesday), the New York Times reports.

Have a great day!

U.S. Science & Tech Investment is Less than Half its High-Water Point.

As the U.S. share of global R&D spending has fallen, China’s has been growing, erasing the U.S. lead in R&D investment. An analysis from the Science and Technology Action Committee found federal investments in R&D and STEM education needs to at least double to 1.4% of GDP over the next five years to allow America to maintain global competitiveness position. Lawmakers have an opportunity to close that gap and tackle the existential issues of our time—mitigating the effects of climate change, meeting growing energy needs, and preparing for the next pandemic. Investing in science now will also support other vital missions: educating future generations of scientists and creating skilled jobs from coast to coast.

To solve tomorrow’s crises—and discover innovations we can’t yet imagine—we must reprioritize science and technology funding, and that work must begin now.