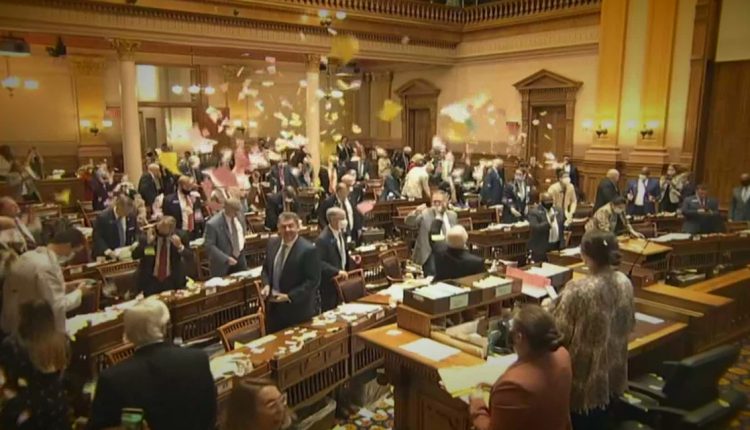 It’s still possible for lawmakers to later resurrect many proposals that don’t pass on Tuesday.

ATLANTA — Georgia lawmakers are facing a key deadline with much work still to do. Tuesday is crossover day in the General Assembly, when bills and other measures are required to pass in the House or Senate and move on to the other chamber. Lawmakers on Tuesday will decide questions including whether they should legalize horse racing. Some key proposals have already moved forward, like a mental health reform measure, but lawmakers will consider additional proposals on Tuesday. Measures that have already failed include a proposal to loosen the state’s hands-free cell phone law for drivers. Because of legislative rules, it’s still possible for lawmakers to later resurrect many proposals that don’t pass on Tuesday.

RELATED: Why is Crossover Day important at the State Capitol?

TO BE DECIDED TODAY

LAWMAKER PAY AND PENSIONS: Pay for Georgia’s 180 House members and 56 senators would rise to 60% of the state median household income, rising to about $36,000, if voters approved under House Resolution 842. House Bill 824 would increase lawmaker pensions by about 40%.

VOTING: House Bill 1464 would let people inspect paper ballots after an election, allow only the State Election Board to accept private donations for election administration and let the Georgia Bureau of Investigation examine election fraud claims.

SCHOOL VOUCHERS: Senate Bill 601 would direct $6,000 to any student whose parents withdrew them from public school after at least six weeks in public school. The education savings accounts would be usable for tuition at private schools and other education expenses.

HORSE RACING: Senate Resolution 131 and Senate Bill 212 would allow up to five horse racing tracks with gambling anywhere in the state, if voters approve.

CAMPAIGN FUNDRAISING: Senate Bill 580 would prohibit leadership campaign committees that are affiliated with members of the General Assembly from taking contributions while lawmakers are in session.

PROTESTS: Senate Bill 171 requires a permit for any assembly, increases criminal penalties for protests, makes it a felony to block a highway or deface a monument, lets people sue local governments if protests turn violent, and makes it legal for someone to run over someone else while fleeing a protest if the person fleeing believed their life was in danger.

FELONY BAIL: Senate Bill 504 would require cash bail for a judge to release from jail anyone charged with any felony.

MEDICAL MARIJUANA: Senate Bill 609 and House Bill 1425 would change how licenses are granted under state’s medical marijuana program in an attempt to jump-start a licensing process tied into knots by legal challenges.

INCOME TAX CUT: House Bill 1437 would cut Georgia state income taxes by more than $1 billion. Republicans say it simplifies the state’s tax system while providing relief. It would create a flat state income tax with a 5.25% rate, raise the amount of income exempt from taxation, and eliminate many deductions.

GAS TAX HOLIDAY: House Bill 304 would suspend the state’s motor fuel taxes through May 31, including a levy of 29.1 cents per gallon for gasoline and 32.6 cents per gallon for diesel. Suspending collections could subtract more than $400 million from road building. The governor plans to use part of last year’s surplus to replace the money.

GUS IN PUBLIC: House Bill 1358 and Senate Bill 319 would abolish Georgia’s requirement for a background check and license to carry a handgun in public. Republicans say it infringes on Second Amendment gun rights for people to have to apply for a permit and pay a fee, usually about $75.

CRITICAL RACE THEORY: House Bill 1084 and Senate Bill 377 would ban the teaching of certain racial concepts that Republicans say are divisive. Opponents say the measure would frighten teachers away from an honest classroom discussion of race in history and the present.

TRANSGENDER ATHLETES: Transgender boys and girls would be banned from playing on the school sports teams matching their gender identity under Senate Bill 435.

PARENT BILL OF RIGHTS: House Bill 1178 and Senate Bill 449 put into one law a number of parental rights that already exist including saying parents have the right to review all classroom materials.

MASKS IN SCHOOLS: Senate Bill 514 would allow parents to exclude their children from mask mandates

ABORTION: Senate Bill 456 would require a woman to get an in-person exam from a physician before the doctor could prescribe her abortion pills and bar delivery by mail without such an exam.

RIGHT TO FARM: House Bill 1150 would enhance protections for farmers against nuisance lawsuits by neighbors over problems such as odors.

HOMELESS: Senate Bill 535, would have made it a misdemeanor for anyone to set up camp on public property. It would have punished cities that didn’t enforce the ban by denying money to local governments and nonprofits.

DISTRACTED DRIVING: Senate Bill 203 would have let drivers use cellphones mounted to their windshield or dashboard while at traffic lights and stop signs.

Need Susceptible Californians to Have More healthy Pregnancies? Doulas Say the State Should Pay Up.