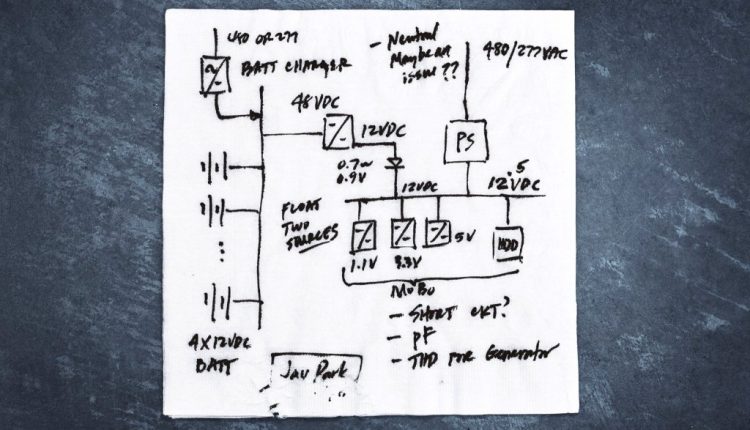 As soon as we Aligned with the strategy of limiting the electrical conversion in the system, we looked for the most efficient way to dissipate the heat that is generated when conversions are necessary. That meant thinking about making the servers a little taller than usual, allowing for larger heat sinks, and ensuring efficient airflow through the data center itself.

We knew we wanted to avoid large-scale mechanical cooling (e.g. air or water-cooled chillers) as these were very energy-intensive and would have significantly reduced the overall electrical efficiency of the data center. One idea was to route outside air through the data center and use it as a cooling medium. Instead of a conventional air conditioning system, we would have one with outside air and direct evaporative cooling to cool the servers and completely remove the heat generated by the servers from the building.

Also today we use a indirect cooling system in locations with less than ideal ambient conditions (e.g. extreme humidity or a high proportion of dust) that could impair direct cooling. These indirect cooling systems not only protect our servers and devices, but are also more energy and water efficient than conventional air conditioning systems or water chillers. Strategies like this have allowed us to build data centers that use at least 50 percent less water than typical data centers.

In 2018, for example, we have our StatePoint liquid cooling (SPLC) system in our data centers. SPLC is the first liquid cooling system of its kind that is energy and water efficient and allows us to build new data centers in areas where direct cooling is not a viable solution. This is likely the most significant change in our original design and will affect future data center designs as well.

The software also plays an important role in all of this. As already mentioned, we knew from the start that the resilience of the software would play a big role in the efficiency of our data centers. Take my word for it when I say that in 2009 software could not do what it is today. The advances we’ve made in terms of performance and resilience on the software side are incredible. For example, today we employ a number of Software tools which help our engineers to detect, diagnose, correct and repair hardware faults in the Interconnect Express (PCIe) peripheral component in our data centers.

TikTok Testing Characteristic That Lets You Stream Dwell From Your PC