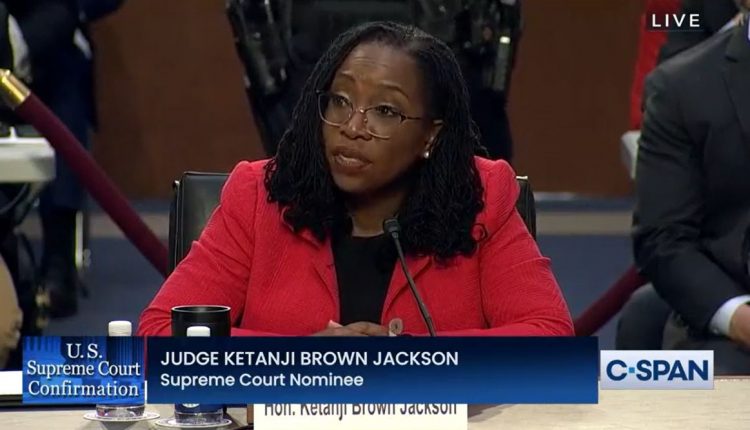 Supreme Court nominee Ketanji Brown Jackson declined to get into the debate over regulating social media using their Section 230 immunity from civil liability for most third-party content. But she did signal if the goal were to regulate certain viewpoints, that would be problematic.

Both Republicans and Democrats have expressed support for limiting that immunity or perhaps eliminating it entirely, but for different reasons. Many Republicans argue that social media platforms like Facebook and Twitter have suppressed conservative speech.

During the first day of questioning in the days-long nomination hearing in the Senate Judiciary Committee, Sen. Mike Lee (R-Utah) brought up Section 230 and posed this question:

“The Communications Decency Act provides a degree of immunity for tech companies operating in the space of being online interactive service providers. It immunizes them from certain causes of action that would otherwise apply against them. Would it be within Congress’ authority to condition the receipt and availability of Sec. 230 immunity on those online interactive service providers operating as a public forum? That is, not discriminating on the basis of the viewpoint of those posting on them.”

Jackson said she could not comment on whether or not, on a particular issue, is constitutional or not.

She could have stopped there, but instead added: “[Given] the criteria that you identified, it would be relevant, I think as to whether or not the government is seeking to regulate along viewpoint lines. Under the First Amendment, that is something that is generally impermissible.”

Sens. Amy Klobuchar (D-Minn.) and Richard Blumenthal (D-Conn.) both talked about reining in Big tech, both through antitrust and because of a mental health crisis abetted by social media platforms.

They weren’t asking Brown to weigh in, just making sure she knew their concern about the issues, including what Klobuchar had said were court decisions that weakened antitrust laws.

Brown did say that the role of the court was to interpret statutes when there are disputes and, in circumstances where statutes have been updated, there are such disputes. She said to the extent that Congress makes statutory changes, it helps courts to resolve those disputes more easily.

Blumenthal talked about the buying and selling of cell phone-related data that consumers don’t have control over, and for which their redress is often only forced arbitration.

He said Jackson has dedicated her career to access to the justice system and that he was trying to make sure people had access to their data. He said he hoped she would consider the court trends in support of forced arbitration and denial of class action rights. He did not ask for a response, nor did she volunteer one.■

As a Nurse Faces Jail for a Lethal Error, Her Colleagues Fear: May I Be Subsequent?

Is The U.S. Congress Getting ready A “Tech Accountability” Bundle? – Privateness