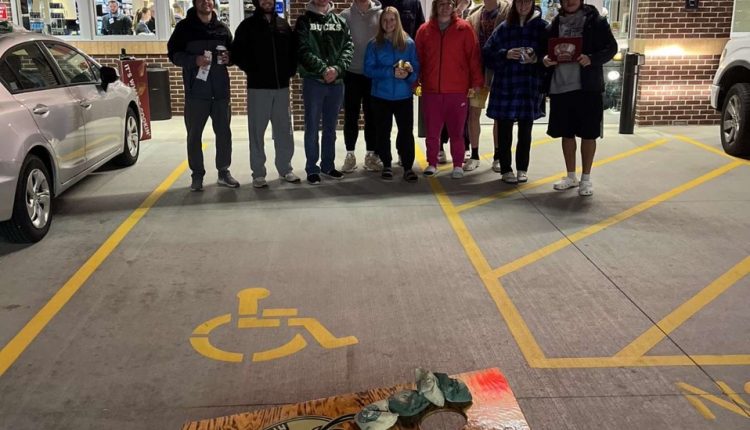 There’s nothing more Wiscony than tailgating, but tailgating at Kwik Trip takes it to a whole other level. Recently, a UW Whitewater student went viral on TikTok after a video of him and a group of friends hanging out before the Elkhorn Road Kwik Trip on the grand opening day received over 190,000 views and over 30,000 likes. December 9, 2021 at 5am Tyler Lund and friends decided to grab their coats and cornhole boards to wait outside in the Whitewater gas station parking lot for the doors to open for the first time.

“Basically, one day, me and my colleague Andrew Montana were sitting at work and we were like, ‘We should just bring this thing up. It would be the most Wisconsinian thing we could ever do. Maybe they’ll give us recognition as one of the first customers, so why not?’ It ended up making us viral, which was pretty awesome,” said Lund, a senior finance and sports management major.

The idea came spontaneously but not only led to a viral video but also to plans for a much larger, sponsored tailgating event ahead of the Whitewater Kwik Trip on Janesville Street for its grand opening day on Thursday January 20, 2022.

“After the first TikTok, I went to the open Kwik Trip a week later and just spoke to the store manager. He thought the idea was a great idea and put me in touch with the company to continue the talks. I spoke to Kwik Trip Corporate about this just a few days ago. We are promoting this event. We’re planning a pocket tournament, so Kwik Trip will be giving away gift cards and merchandise to help make this tournament a bigger story and reach a bigger audience,” said Lund.

It’s not everyday that Whitewater celebrates a new venture coming to town, and these students found the perfect way to not only fill up on flavorful chicken sandwiches and Karuba coffee, but also to create something exciting. All are welcome to the grand opening of the 1065 Janesville Street Kwik Trip on January 20th with the cornhole tournament starting at 3am