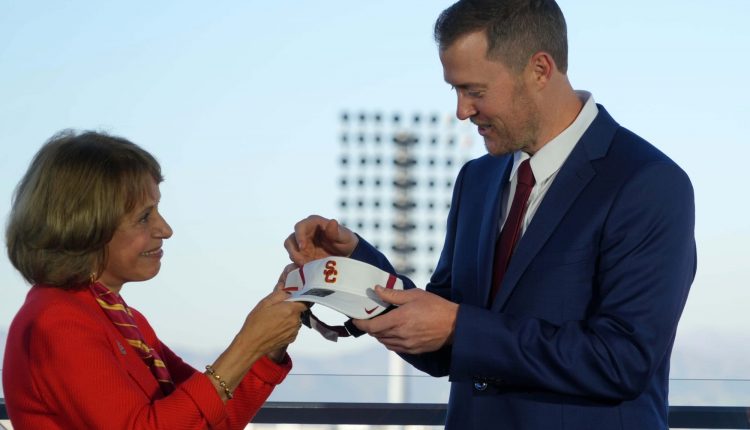 A move that rocked the Big 12 football landscape came late last month when the Oklahoma Sooners saw their head coach set off for what appeared to be greener pastures. Now former Oklahoma head coach Lincoln Riley left Norman, OK, last month to take the same job with the USC Trojans in the PAC-12.

Riley replaced former USC head coach Clay Helton. This was one of the key landmark steps of the fall before the Sooners offseason even began. Riley sped for USC less than a full 24 hours after Oklahoma fell short in Bedlam by the Oklahoma State Cowboys.

USC went above and beyond to hire Riley, including one of the most lucrative head coaching deals in modern college football history.

And it shows how committed USC Riley is to instant success on the recruiting path with their offering and dedication. USC has also been very active on social media since hiring Riley as her next head coach.

That included a post on their official TikTok page related to the Christmas holidays that was supposed to be trolling Oklahoma. USC subtitled this post, showing Riley in the Trojan gear, with “unrealistic things we want for Christmas,” followed by “for Oklahoma fans, leave us alone.” That obviously implied that Oklahoma fans are still very salty about Riley going to USC.

Riley left Oklahoma as head coach after five years at the helm. He has had many achievements including winning the Big 12 championships each season with him as the bank chief through the 2020 season.

On the Oklahoma side, they replaced Riley with former Clemson Tigers defensive coordinator and former OU head coach Brent Venables. It will be interesting to see what impact Venables has on the Sooners.

For now, there is still the feeling of how Oklahoma and USC will both be affected by the coaching carousel that is spinning rapidly before the turn of the year. There’s a lot going on in the Big 12 landscape right now, and Riley’s leaving Oklahoma is a big reason for that.