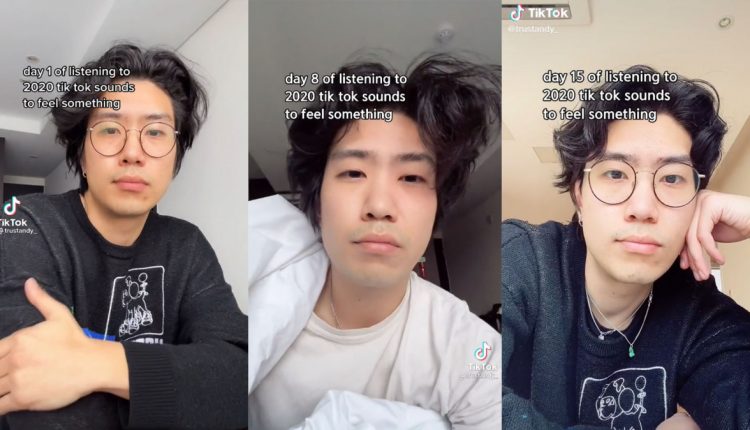 He had recently moved to South Korea and was looking for ways to chat while completing his mandatory two-week quarantine. So he turned to TikTok, specifically the nostalgic sounds of early pandemic life. The first sound he reacted to was “Supalonely (Feat. Gus Dapperton)” by BENEE, which triggered a popular dance trend in the app at the beginning of the pandemic. Three weeks later, Koh’s video has over 6.7 million views and 1.5 million likes.

Koh quickly realized that this was a bittersweet feeling that most TikTok users could relate to. So far he has posted 14 videos on the series.

And he’s not the only Creator reviewing the early days of the pandemic. In September, The Atlantic reported on the subculture of YouTubers on TikTok and YouTube feeling nostalgic for top pandemic content. “These creators of the ‘early pandemic aesthetic’ have built an online community connected by longing for a time when the world seemed united in an uncertain future,” writes Morgan Ome.

You might think that those 2020 TikTok catchy tunes – you know, those that overran your For You Page for months – wouldn’t hold out now, but they actually evoke rich emotional responses from users like Koh.

“The most interesting thing is that these noises almost trigger a collective consciousness,” says Koh Mashable via email.

And there is a neurological reason for that. According to Sandra Garrido, a music and mental health researcher at Western Sydney University, music and sounds are some of the biggest triggers of nostalgia.

“One of the great mechanisms by which we have an emotional response to music is memory,” explains Garrido Mashable, citing a 2008 research study by Patrik N. Juslin and Daniel Västfjäll entitled “Emotional Responses to Music: The Need to consider the underlying mechanisms. “In it she says:” They argue that just listening to a snippet of music can bring us directly back to a place we were before, or remind us of a place or time that we were before. ”

These TikTok sounds do just that.

If you’ve been on TikTok in early 2020, chances are Koh’s series will make you feel something. Songs like Curtis Roach and Tygas “Bored in the House”, Chip Tha Ripper’s “Interior Crocodile Alligator” and Tiagz’s “Heart Went Oops” will most likely transport you into a surreal time synonymous with insecurity, whipped coffee, the word “unparalleled “and the first season of Tiger King.

It can be reassuring to look back on the things that happened in our lives and how they shaped us to who we are now.

Just check out the comments on Koh’s TikToks. One user writes, “I can’t tell if I’m feeling nostalgia or ptsd,” and another comments, “Chloe ting, Tiger King, whipped coffee, bread baking.” But the overwhelming feeling that Koh seems to capture? As one commenter put it, “Please, why do I have to cry about it?”

This is a perfectly normal reaction, says Garrido. Research suggests that nostalgia is a way for us to reflect on our personal narratives. “It can be reassuring to look back on the things that happened in our lives and how they shaped us,” she says. “We all need to feel connected to our past.”

It has been almost two years since the pandemic began and “There’s still a lot to process,” adds Garrido.

So it makes sense that these viral TikTok sounds are a way for us to contextualize such a confusing and traumatic time.

This is what primarily inspired Koh to take up the challenge. “I took a break from TikTok before coming to Korea, but as soon as I returned to some of the older videos and sounds that I had favored, I felt an odd combination of nostalgia, sadness and joy,” he says.

“I think that we as a society will be replacing last year’s layers for some time to come,” adds Koh. “In my opinion, I am still working on memories and feelings from last year in March 2020, these sounds will always contain an incredible amount of emotions.”

We can’t be bored around the house anymore, but we’ll never forget what it felt like – or sounded like.