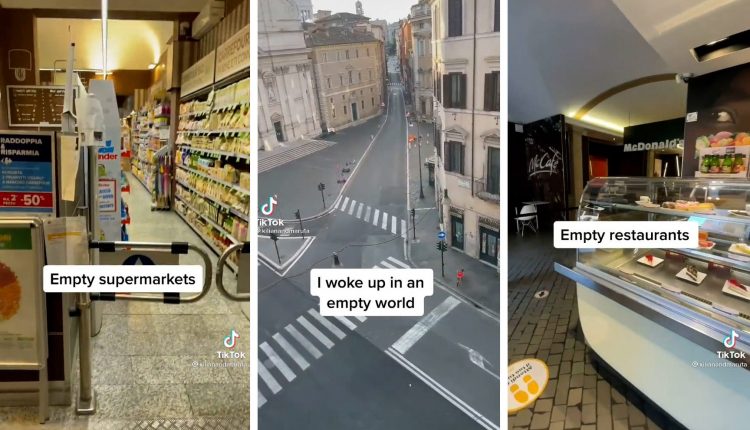 In March 2021, the TikTok account Kilian Maruta (@kilianandmaruta) began to publish videos that appeared to document life in an “empty world” and an “alternative universe”. The latest addition to the series of strange videos shows a seemingly empty “ghost ship”.

We’ll break down the history of the TikTok account, the “Empty World” video series, the “Ghost Ship” videos, and how the fascinating videos can all be explained.

The first video in the series shows empty streets, supermarkets and even a McDonald’s.

It was uploaded on March 23rd and has been viewed 23 million times.

No person appeared in any of the videos. (Courtesy: @ kilianandmaruta / TikTok)

The eerie nature of the videos brings drama and mystery to the series. But all of the videos seem to have been posted for fun by some resourceful creators.

Older videos on the account indicated that Kilian and Maruta, who are believed to be two people (a man and a woman), could be from Tokyo, Japan.

Highlights from the ‘Empty World’ series

At the end of a video on March 28th, we discovered there was a car being driven in Rome, Italy. Ristorante Target and the Hotel Patria are both visible.

Rome reappeared in a video released April 1. The Richmond Hotel can be seen behind gas pumps. In the videos, @kilianandmaruta claims that “food doesn’t rot” in the “alternate universe”.

I was a qualified AI programmer who worked for a large technology company. I hacked into the company’s quantum computer. Unlimited access. I uploaded my own code to the computer and it started learning. Fast. Really fast. It has evolved into something else. And suddenly it happened!

I spawned in an empty world. And now I’m ALONE. Completely alone. And I need help. When you are there please …

On April 25, a new video showed portions of computer-generated images, which means the creator (s) of the videos may have video editing skills.

“I woke up on a ghost ship.” On June 1st, after traveling to various cities that appeared to be empty, Kilian Maruta’s (@kilianandmaruta) TikTok narrative turned into an empty cruise ship.

The first TikTok video on the “ghost ship” on “day one” showed @kilianandmaruta capturing an empty swimming pool, arcade room, empty seating, empty hallways and an empty guest room. We also noticed the radar and controls on the deck of the ship. The video was shot at night.

The second video in the “Ghost Ship” series was filmed in daylight on “Day Three”. It showed that the ship’s engines were on and that it was moving. Kilian Maruta visited the “pool deck” and found again that it was empty. “I have no food. No water, ”they wrote. The camera pointed through a door at an eerie dining room and then climbed a ladder marked “Restricted Area”.

In the third video of “Day Four”, another huge restaurant and dining area appeared to be empty.

It seems to be day. (Courtesy: @ kilianandmaruta / TikTok)

On June 4th @kilianandmaruta posted the latest video of the “ghost ship”. It was “day five”. They claimed to have found food and water at a snack bar. At the end of the video, a page from Stephen Webb’s book “When the universe is teeming with aliens … where is everyone?” Appears for a few seconds.

TikTok commentators tried to explain the “ghost ship” and other videos in a variety of ways.

We saw comments mentioning that the videos were showing video editing, virtual reality, a video game, or a simulation. Others believed the ship was an old Disney Dream cruise ship or a ferry in Ireland.

Several others also postulated that due to the COVID-19 pandemic, fewer people may have to be removed in a video editing process, including on the cruise ship.

We’re not sure who Kilian and Maruta are or how the videos were made. It is likely that the videos were recorded and people removed later in post-production. Some of the videos shot in cities appeared to have been recorded early in the morning, which meant fewer people were on the street who later had to be deleted while editing.

For the time being, the entertaining series “Empty World” and “Ghost Ship” by Kilian Maruta (@kilianandmaruta) will probably continue on TikTok, where all videos can be viewed and enjoyed.