“Data-Driven Thinking” is written by members of the media community and contains fresh ideas on the digital revolution in media.

Today’s column is written by Allison Schiff, managing editor at AdExchanger. It’s part of a series of perspectives from AdExchanger’s editorial team.

At least not according to the Federal Trade Commission (FTC).

Meta is being sued by the FTC for antitrust violations stemming from its past acquisitions, including that of Instagram for $1 billion in 2012 when Instagram was just a photo-sharing app with 13 employees, 33 million users and no revenue.

Leaked internal Facebook emails cited by the FTC in its suit quote Mark Zuckerberg stating that one primary rationale behind buying Instagram was to “neutralize” a budding competitive threat.

As a result, the FTC argues, Facebook successfully sapped its competitors and sailed into utter dominance of the personal social networking category.

“Personal social networking” is a legal term of art used by the FTC to define the market allegedly being monopolized by Meta. It’s a strange term and an even stranger category.

In all fairness, the law requires the FTC to define a specific market in order to bring an antitrust case against a company.

But what exactly is personal social networking?

According to the FTC, it’s any service that allows people to maintain personal connections and share personal content with friends and family.

This definition is somehow both too specific and too vague. It doesn’t include messaging – although Meta owns multiple of the largest messaging apps in the world – and excludes other social platforms. 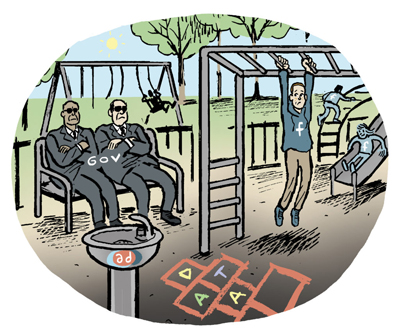 If the personal social networking category only includes Meta and then Snapchat as a distant second, it’s not even worth comparing the two. Meta dominates – case closed. Let’s all pack up and go home.

Snapchat has roughly 319 million daily active users. (Approximately 2.8 billion people used at least one of Facebook’s “family of apps” on a daily basis in December.) In 2021, Snapchat generated $4.1 billion in revenue. (Meta’s full-year revenue in 2021 was nearly $118 billion.)

From the FTC’s perspective, it makes sense to define the relevant market as narrowly as possible. Legal minds, please chime in, but it seems logical that clearly delineating the parameters of a market should make it easier to argue alleged dominance rather than trying to boil the ocean of all platform technology companies. (LinkedIn, for example, with Microsoft as its multitrillion-dollar parent, is hardly suffering under Meta’s yoke.)

But by excluding platforms that are almost universally considered to fall into the social media bucket, the FTC is almost begging for the counterargument that these platforms are, in fact, direct competitors to Meta.

TikTok in particular is a strong contender that’s taken part of Facebook and Instagram’s share of mobile attention.

TikTok is a dancing fly in the FTC’s argument ointment.

The ByteDance-owned app, which has 60 million daily active users in the US, is on track to hit 150 million global DAUs this year and announced a milestone of 1 billion monthly active global users in 2021. Instagram’s overall engagement is still higher than TikTok’s , but US teens cite TikTok as their favorite social media app, ahead of both Facebook and Snapchat, according to a recent survey from Piper Sandler. And TikTok is set to surpass Twitter and Snapchat’s combined global ad revenue this year.

Meta is a beast, but TikTok’s explosive growth undermines the FTC’s argument that Snapchat is Meta’s main competitor and that Facebook dominates a strictly defined market that doesn’t include TikTok.

During Meta’s most recent earnings call in February, Zuckerberg mentioned TikTok by name five times, noting at one point that TikTok is “so big as a competitor already and also continues to grow at quite a fast rate off of a very large base.”

TikTok’s wild success with short-form video is why Meta is pushing so hard with Reels and why Meta reportedly paid a consulting firm to place disparaging op-eds about TikTok in publications around the country.

“We face a competitor in TikTok that is a lot bigger, so it will take a while to compound and catch up there,” Zuck told investors.

The FTC might want to rule out TikTok as a Meta competitor, but TikTok’s growth is good for Meta’s defense.

Never has a thriving competitor been so convenient.

Oh, and the $4.1 billion in revenue Snapchat generated last year represents a 64% YoY increase. Snap also hit profitability for the first time in Q4 2021. Snap’s success even more directly complicates the FTC’s argument that a competitor is being boxed out of potential growth.

Meta’s lawyers must be pleased.

Pilots will try to swap planes in mid-air on Sunday – ^