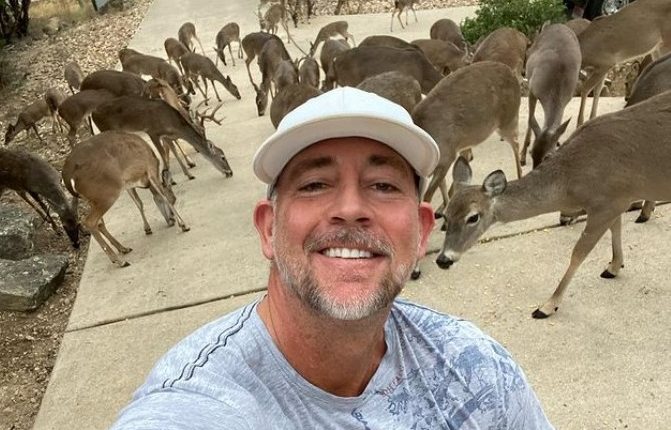 TikTok is fawning over a ‘deer whisperer’ with San Antonio ties

Over the course of a year, Lynn Smith’s Austin home has gained 70 more mouths to feed. They don’t sit around the dinner table, they gather around the garage door waiting to hear the shake of a cup filled with feed. Smith, who is originally from San Antonio, is known as the TikTok “Deer Whisperer” with more than 2 million followers waiting to watch his daily feed.

Before Smith posted anything to TikTok, all he knew through second-hand knowledge from his three teenaged children was that the app started as Musical.ly. He owned a personal Facebook page, but that’s about as far as the “finance guy’s” social media repertoire went. Now his kids’ classmates recognize him as the TikTok-famous “Deer Whisperer.”

The hoard of deer following Smith around his Lake Travis home makes his corner of Austin look more like Snow White’s Enchanted Forest. He says they became familiar with him and his wife during their evening walks that they made a habit during the stay-at-home months of the pandemic. The deer eventually started coming up to him, looking for snacks and eating directly from his palm. Smith recorded a few of the interactions to share with a friend, who encouraged him to take advantage of the TikTok platform and build a niche following.

The rising deer whisperer says he wasn’t entirely convinced the videos would take off, but he decided to give it a shot. The first video, posted in February 2021, shows the garage door opening to a group of deer waiting on Smith with hungry eyes. The video reached more than 16 million people, Smith says.

Smith has a mob of deer following him around, but he does have some standout stars in the group that TikTok has come to know, like Buddy, Blue Bell, and Sandy (who Smith has named). He says he’s working on merchandise inspired by the three deer who make the most appearances in his videos.

Smith’s daily deer followers are just as surprising as the whirlwind of online followers that he’s built.

Smith thinks the interest people have in his videos centers on the relationship he’s been able to build with the deer.

“I think it’s a combination of people being like ‘This guy’s crazy, he lets deer in his house,” he says. “It’s very difficult to get a deer to be that comfortable, but I know it’s just the time I’m spending with them. I think people are just like ‘Oh my god, what is this guy doing?'”

Smith, still a finance guy at heart, estimates that his deer friends chew up nearly 2,000 pounds of feed a month.

“I told my wife that I need to go get a second job,” he jokes.

Liberals to reboot controversial C-10, together with invoice forcing digital giants to pay for information