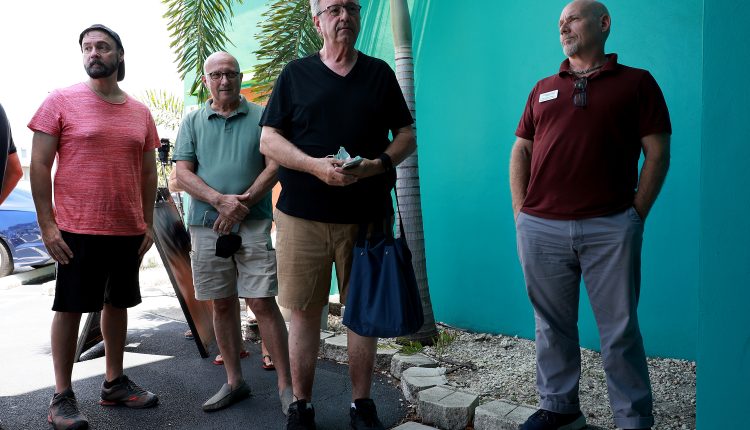 Dan DeChellis started looking for a monkeypox vaccine around July Fourth but was unable to find a place that offered one in Orlando, Florida, where he lives.

After about a week of searching online, he and three friends made an appointment in Wilton Manors, a city about 3½ hours south by car. DeChellis, who is gay, said he doesn’t understand why the vaccine wasn’t available closer to home or why getting answers about who was eligible from his local health department was so difficult.

“My biggest takeaway from our experience has been just the difference in the state of Florida from county to county,” said DeChellis, 30, a supply chain manager who lost a half-day of work while traveling to get his first vaccine dose.

The perception that the response to the monkeypox virus in the South has lacked coordination has rekindled familiar concerns about recent state policies that leave members of the region’s LGBTQ+ communities feeling marginalized and discriminated against. More urgently, it raises questions about whether state and local health departments are doing enough to protect the people principally affected by the virus: men who have sex with men.

States like New York and California have followed the Centers for Disease Control and Prevention’s recommendation to prioritize gay and bisexual men in outreach, vaccination, and treatment for monkeypox. Such states have declared a public health emergency and initiated aggressive, targeted vaccination campaigns. Although New York and California are the states with the highest number of cases, Florida, Georgia, and Texas are home to robust gay communities and together have just over a quarter of the country’s confirmed monkeypox cases.

But in Florida, and in other areas of the South, gay men fear that the monkeypox response is not being consistently prioritized because the virus affects the health of gay men, especially those who are Black or Hispanic. And they worry that local governments are not responding with urgency to diseases that primarily affect marginalized communities.

“They are not going to go out of their way to help us,” said Hank Rosenthal, 74, a gay man and retired emergency medicine physician who lives in Fort Lauderdale, Florida.

Jeremy Redfern, a spokesperson for the Florida Department of Health and speaking on behalf of the local health departments, said the agency is “fully integrated” to respond to public health needs across the state’s 67 counties. “There are no jurisdictional boundaries to our reach in Florida,” he said. “There is no politics with monkeypox.”

But recent laws like a Florida one that prohibits instruction on gender identity and sexual orientation in some elementary school grades — referred to as the “Don’t Say Gay” bill by opponents — and the state’s ban on transgender care for people with Medicaid have created a hyperpoliticized atmosphere around issues related to sexual orientation and gender identity, LGBTQ+ advocacy groups say. And that has some groups feeling the need to take matters into their own hands, especially in states that downplayed the covid-19 pandemic and banned face mask and vaccine mandates to limit the spread of the virus.

“We mobilize, and we try to make stuff happen because our job is to take care of our community,” said Ricardo Martinez, CEO of Equality Texas, an advocacy group for LGBTQ+ rights. “We can’t depend on the state to provide the relief and safety that we need, so we have to organize ourselves.”

Florida’s first suspected case of monkeypox was reported in Broward County in late May. Since then, the health department has reported that most of the state’s more than 2,200 cases — about 2 in 3 — have occurred in South Florida’s Miami-Dade and Broward counties, where DeChellis and his friends traveled to obtain a monkeypox vaccine.

The national stockpile ships vaccines to five sites per state and at first used a distribution system that was unfamiliar to state officials; it required them to track doses manually and place orders by email instead of through an automated system, creating a bottleneck. On Sept. 6, the U.S. Department of Health and Human Services announced it had awarded a $20 million contract to a private wholesale company to “significantly” expand vaccine distribution to more sites in the coming weeks.

As government responses improve, LGBTQ+ advocates and people who have tried to get vaccinated in Florida say vaccine access and information during the first months of the virus’s spread were inconsistent. They said local health departments used different eligibility criteria, appointment scheduling systems, and public outreach.

Brandon Lopez of Orlando said that when he first tried to get vaccinated through his local health department in June, he was told that only health care workers in laboratories and those who draw blood were eligible. Lopez, 30, said he considered driving to Miami after hearing that friends there got the shots but was told appointments were only for local residents.

Some counties announced online scheduling for appointments in mid-July, but many people who tried to sign up said that no slots were available or that they received an error message prompting them to create a new email account.

Advocates are also concerned that people with more education, money, and time might be better able to access the shots.

Early data suggests that Black and Hispanic men are disproportionately affected by monkeypox cases, yet non-Hispanic white patients have received more first doses of the vaccine than any other group, according to the CDC.

More appointments began to open up in Florida in mid-August after the FDA authorized a new method of giving the vaccine that required training and special equipment but stretched the nation’s limited supply.

DeChellis did not have to drive to Wilton Manors for his second shot on Aug. 23, and Roth received his second dose as scheduled. After trying for weeks to get an online appointment, Lopez got vaccinated in early August at the Orange County health department in Orlando.

But the experience made him feel as though monkeypox was not an urgent matter for local health officials. “My expectation is that if it doesn’t affect a mass group of people, it’s not going to be a priority,” Lopez said.

After the monkeypox outbreak began, some health departments in the South began partnering with so-called trusted messengers in the LGBTQ+ community to raise awareness and host vaccine clinics.

In South Florida, for example, Broward County’s health department reached out to high-risk groups in the community for help getting people vaccinated, said Robert Boo, CEO of the Pride Center at Equality Park, a nonprofit that provides health and social services for LGBTQ+ people and that hosted a vaccine drive. In Texas, Equality Texas held a webinar with doctors and other experts who answered questions from the public.

But in other areas, gay and bisexual men said they could not get answers, not even from their local health departments.

Florida, Georgia, and Texas together make up 26% of the nearly 22,000 confirmed cases reported as of Sept. 9, but their response has been unlike California’s and New York’s, where emergency declarations from governors have allowed more health care workers to administer the vaccine and local health departments to access more money from the state for vaccinations, education, and outreach.

“An emergency declaration does nothing for the response,” said Redfern, the spokesperson at the Florida health department, which is responding to a concurrent outbreak of meningococcal disease also primarily affecting gay and bisexual men.

“There is nothing a new state of emergency order would do for Georgians that isn’t already being done,” said Andrew Isenhour, a spokesperson for Republican Gov. Brian Kemp. He also said the Georgia Department of Public Health has been raising awareness about monkeypox and recently launched a statewide portal for scheduling vaccinations.

In Texas, Austin and Dallas officials declared local emergencies in early August. The Texas Department of State Health Services declined to comment on whether a declaration is warranted statewide.

Some providers, like Dr. Ivan Melendez of the Hidalgo County Health Authority in South Texas, agree that because monkeypox is spreading primarily among men who have sex with men, a statewide declaration is not needed. Lab testing, vaccines, and guidance for both clinicians and the public are available.

But others say an emergency declaration would signal that a threat exists, free up funding, require additional reporting, and cut bureaucratic red tape.

“It gives us a concerted response,” said Jill Roberts, an epidemiologist and associate professor at the University of South Florida. “It allows for more information: Where are vaccines going? Where are cases happening? Where are the hot spots we can hit?”

Dr. Melanie Thompson, an Atlanta physician who provides care for people living with HIV, said she would like the state and governor to play a stronger role in coordinating a uniform response across Georgia’s 159 counties. Not all local health departments are adequately staffed or funded, Thompson said.

“They’re all out there doing their own thing,” she said. “Some counties do a really good job with that. Other counties don’t.”

Newborns Get Routine Heel Blood Checks, however Ought to States Maintain These Samples?