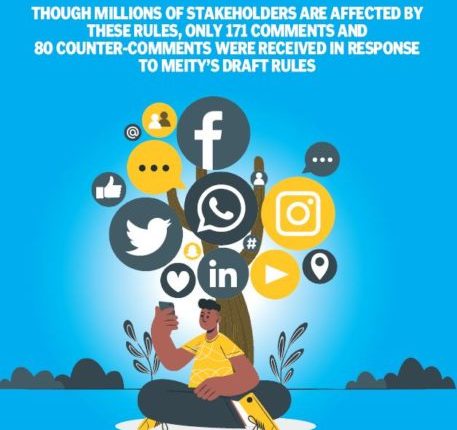 The Union government has published detailed guidelines for digital media and over the top (OTT) platforms. Although social media is now one of the preferred bases for exchanging information, especially on glaring social issues, there is an undeniable risk of abuse.

While Facebook and Google have agreed to adhere to the new rules, some intermediaries are not on board. The spokesman for BJP even declared this as a dispute between the “law of the country” and the social media platforms’ own regulations. WhatsApp moved the Delhi Supreme Court under these rules. The center has warned that these giants could lose their immunity as intermediaries, leaving them responsible for illegal content as the person who publishes them under the IPC.

In contrast to the previous rules from 2011, the new rules focus on the concept of “due diligence”. It expressly instructs intermediaries to publish all rules and regulations, privacy policies and user agreements for its users. The law also instructs intermediaries to continue to inform users of privacy and user guidelines and to keep them informed of their activities on an ongoing basis.

The law mentions the identification of the first information producer by the necessary order of the court or a competent authority. The government intends to curb the spread of false and falsified information and use it as a tool to facilitate the investigation process by tracking down the primary originator of the information.

A wide range of unclassified content is available to users on the OTT platforms. The guidelines define categories according to which the content must be classified. In addition, the concept of parental controls is introduced. The new standards in particular offer intermediaries the opportunity to deal with content-related complaints. A three-tier system for resolving complaints is proposed: the first tier would be self-regulation by publishers, the second tier would be self-regulation by the publishers’ self-regulators, and the third tier would be a supervisory system of central government.

In this digital age, neither the right to speech nor the right to privacy are absolute – everything is subject to a permissible set of restrictions designed to protect the rights of others.

These rules have bypassed the legislative route. They were created in exercise of the powers provided for in Section 87 of the IT Act 2000.

However, in order to regulate these social media giants, the government needs to be more careful with the rules and not just make changes through subordinate laws. It is unfortunate that when these rules affect millions of stakeholders, only 171 comments and 80 counter-comments were received when MEITY was preparing the draft rules and inviting comments / objections.

The fear of tracking down private communications and using them against users has a terrifying impact on freedom of expression and expression. In addition, the violation of fundamental rights must be done “through the least restrictive alternatives” as set out in Kerala State Beverages (M&M) Corp. against PP Suresh, (2019) 9 SCC 710, could also be at risk.

According to Section 79, the central government can only prescribe the “due diligence” that intermediaries must observe. Forcing an intermediary like WhatsApp to fundamentally change its platform and identify the first author of the information could be outside of “due diligence”. In addition, Section 3 (g) requires intermediaries to retain records for an extended period of time for investigative purposes, and even the information of users who have canceled their registration from the platform must be retained for 180 days. However, this could violate KS Puttaswami judgment (2017) 10 SCC 1, which emphasized the right to be forgotten.

Section 4 (4) mentions that major social media intermediaries must use automated tools to identify information that represents explicit or implicit rape, sexual abuse or sexual behavior of children. Such tools are unaccountable and transparent, and they also suffer from accuracy issues that can affect freedom of expression.

Upon receipt of a court order or upon notification by the government or its agency, the intermediary should remove the content within 36 hours. The recent cases of notices being sent to social media intermediaries about offensive or politically tainted content are worrying. In addition, terms are used in Section 1 (b) that can be interpreted broadly and that allow the government to compromise freedom of expression and expression as it sees fit.

Section 4 (7) deals with the voluntary review of accounts by users using an appropriate mechanism. While no one can deny the importance of account verification, the voluntary verification and verification of accounts through any appropriate mechanism that is not defined makes the process arbitrary. Even if the information obtained for verification cannot be used for other purposes without express consent, there is a risk of a data protection breach and with such poor data protection laws, liability can easily be overridden. In fact, the Data Protection Act has yet to be enacted.

The law regulates the OTT platform through the establishment of a three-stage mechanism for resolving complaints – Sections 12 (4) and 14 (5), in which a self-regulating body (first and second level) and a committee (third level) are involved, to warn, censure, admonish or reprimand the publisher. In addition, the Department of Information and Broadcasting reserves the right to refer complaints directly to the third tier, which puts the ball in front of the executive tribunal for decision.

Technology, especially social media, has undoubtedly changed lives. Since the “right to freedom of expression” is the most powerful fundamental right in our constitution, it is vital that there are balanced and well-codified laws that protect this right of citizens.

(The authors are fourth-year law students at Osmania University)

Now you can get hand-picked stories from Telangana today every day on telegram. Click the link to sign up.