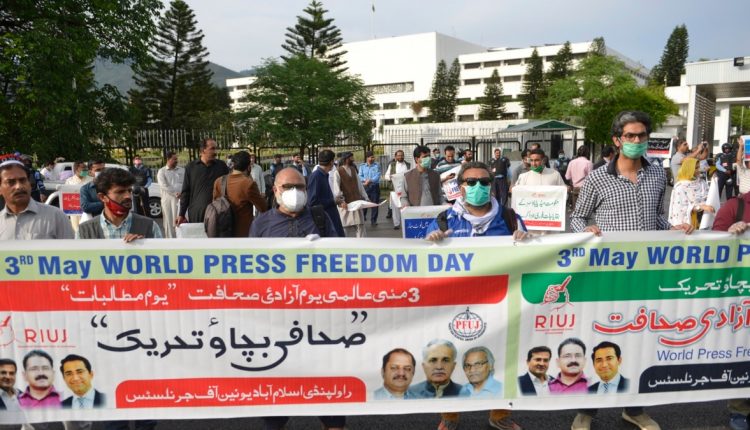 In late May, the Pakistani government proposed a law to create a new Pakistani Media Development Authority (PMDA) to oversee broadcasting, print and all digital media.

According to the newspaper Dawn, the agency would have the right to “register, monitor and analyze digital media platforms and ensure that cyber laws are enforced”.

The government claims that the centralized regulator will fix a “broken” inter-agency system that now exists. But prominent broadcasters, including the All Pakistan Newspapers Authority and the Pakistan Broadcasters Association, see it differently.

In a joint statement, the groups called the proposal “draconian” and said it would open the door to editorial pressure and potentially heavy government fines.

In response, Farrukh Habib, Minister of State for Information and Broadcasting, said on August 18, “There will be no restriction on media freedom” under the new authority.

This statement is misleading.

As suggested, all forms of media would have to be licensed annually. The new 10-member PMDA Council would have the power to prohibit the publication of content that is considered false or that could incite violence or hatred. Officials could ask for any documents they wanted and seize media property with impunity.

The media would have to adhere to an official code of conduct and fines of up to $ 1.5 million are allowed. Review of PMDA Proposal in South Asian Voices, Fizza Batool, a Ph.D. Candidate at Karachi University wrote:

“Failure to comply with the Code of Conduct – which has yet to be drawn up by the PMDA – could have serious consequences, including three to five years in prison and fines of millions of rupees. PMDA could also ban a media company, summon the content producer to explain, and punish media channels without warning or an opportunity to be heard.

“The regulation proposes the formation of media complaints boards to hear public complaints against the media. The decisions of the councils and the authority can only be challenged in a media court that oversees issues related to professional problems of media staff. In addition, the only way to challenge the tribunal’s decision is through the Supreme Court of Pakistan. ”

Critics say this new law would worsen what is already bad under the current Pakistani Electronic Media Regulator (PEMRA), which has a history of suppression.

In 2018, for example, PEMRA warned media companies against “reporting excessively on topics such as violence, kidnappings, sexual abuse, terrorism and natural disasters” in order to counter the “negative” image of Pakistan.

The general environment has deteriorated for Pakistani journalists, who are often harassed and attacked.

Asad Ali Toor, who works for Aaj TV and hosts the Asad Toor Uncensored YouTube channel, has been charged with sedition for criticizing government institutions on social media.

In May, Toor was attacked by three unidentified men who were taking his electronic devices away.

A week later, he was summoned by the Pakistani National Cybercrime Response Center and charged with “defaming” the Pakistani government. Why exactly was never explained.

Last year, journalist Matiullah Jan was kidnapped by armed men and later dropped off on the outskirts of the capital, Islamabad.

The incident occurred the day before Jan was due to appear in court for disregarding the Supreme Court ruling.

Jan is a vocal critic of the Pakistani government, claiming the kidnapping was an attempt to intimidate him.

Since Imran Khan became Prime Minister in 2018, the influence of the Pakistani military intelligence agency Inter-Services Intelligence (ISI), “which dislikes independent journalism, has increased dramatically,” according to the RSF. Khan is not only head of state, but also chairman of the ruling Pakistan Tehreek-e-Insaf (PTI) party.

On August 23, Human Rights Watch, a New York-based non-governmental organization, condemned the proposed PMDA bill, saying that an independent body should be responsible for media regulation. The group said the government should “stop trying to control reporters and instead start protecting media freedom.”

While the Minister for Information and Broadcasting, Fawad Chaudhry, recently praised the law, the Pakistani Union of Journalists (PFUJ) plans to protest before the next parliamentary session.