Our meals author tried four TikTok recipes. Here is what he thought. | Meals and cooking

The worst pain of my life was when I was struck by kidney stones. If I ever have another and writhe in excruciating agony, at least I know it could be worse.

I could watch TikTok.

I’d spent my entire life not even going on TikTok. I’ve never been tempted. Although I didn’t realize it at the time, I was living in a state of grace.

Then my editor decided that if I recreated some of the most popular TikTok recipes, it could make a good story.

TikTok, in case you don’t know, is an app where people from all over the world post incredibly stupid videos. There’s a time limit of sorts, and they’re meant to be brief, but a lot of them seem positively endless.

To familiarize myself with the concept, I watched as many as I could stand, back to back. Some showed the same boy with clear blue eyes doing strange things with his hair. Others showed people lip-synching to songs or rhythmically distorting themselves in a dance. Most of the others appear to be videos of cats and dogs, often with people speaking for them in squeaky voices.

One of the biggest TikTok recipes is something called Mermaid Toast. Invented in 2017 (but everything on TikTok is new to me), Mermaid Toast is a cream cheese toast tinted with swirls of color made from ingredients like liquid chlorophyll and seaweed powder, and decorated with edible gold leaf and edible glitter.

At the end of the day, it’s still just toast with cream cheese.

I didn’t make Mermaid Toast, but I decided to make perhaps the most popular TikTok recipe of all time, Baked Feta Pasta, more correctly known as TikTok Pasta.

TikTok recipes tend to be easy to make, and so is this one. It’s just pasta cooked with feta cheese, cherry tomatoes, basil and olive oil.

Or, if we’re being honest, it’s pasta cooked with too much feta cheese, cherry tomatoes, basil and too much olive oil.

The dish became popular on TikTok, although it wasn’t invented, by Yumna Jawad. She uses 8 ounces of feta cheese and 4 ounces of olive oil to 8 ounces of uncooked pasta. In a video she made of the dish, she says it makes eight servings.

How does it taste? Honestly, it tastes like too much feta cheese. But other than that it’s a decent dish. If you’re planning on making it, I’d highly recommend using four ounces of feta and ¼ cup of oil.

Next, I tried Cloud Bread, which is similar in theme to Mermaid Toast. That means its looks are more important than its taste.

Cloud bread is egg whites whipped with sugar and cornstarch until stiff and then baked at a low temperature.

Wait a minute. You can’t fool me That’s not bread, that’s a soft meringue. 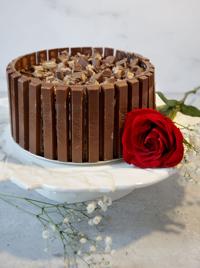 And then I made a TikTok KitKat Cheesecake, that’s what it sounds like. It’s an extra rich cheesecake surrounded by KitKat candy bars, with chocolate ganache on top and even more crushed KitKat candy bars on top.

In other words, it’s a cheesecake with almost a pound of candy and chocolate in it. And cream.

By my calculation, it has over 900 calories per serving, and the portions aren’t large.

TikTok KitKat Cheesecake was invented by an Englishwoman, Eloise Head. Based on the nutritional value of her creation, I’d guess she’s still upset about the Revolutionary War and venting her anger on Americans cooking TikTok recipes.

For the record, I’ll take credit for the cheesecake portion of the recipe being light and fluffy and pretty good — and even without the crust or the chocolate ganache or any of the candy bars, it’s still 288 calories per serving.

Yes, good luck with that. Kewpie mayonnaise is the hottest condiment in America right now, and it’s selling out instantly wherever you look for it. Kewpie is made in Japan and is said to be a savory, egg yolk-rich mayonnaise. If you find it let me know how it is.

I used Hellman’s. And to match Mariko’s video, I served it with avocado, kimchi, and nori seaweed.

Basically, the dish is a very simple salmon donburi – a Japanese rice dish with salmon on top in this case. By definition, donburi is served in a bowl; I used a plate but if you want to be traditional you can put it in a deep bowl.

The smooth, fatty salmon is sliced ​​by the salty soy sauce, while the sriracha’s savory fire is tamed by the mayonnaise. Eaten on a piece of seaweed (optional of course) with kimchi on the side (also optional) it’s a wonderful combination.

But I won’t go back to TikTok to look for another.

Keep up to date with life and culture in St. Louis.

What the Federal ‘No Surprises Act’ Means in California