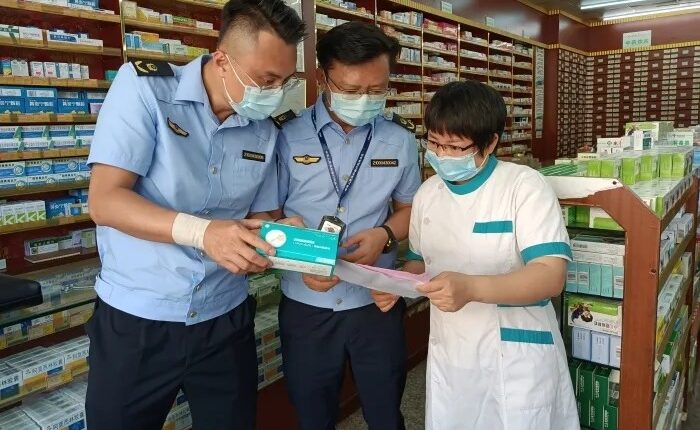 Authorities have recently intensified the crackdown and supervision of the illegal sale of epidemic drugs and materials and on acts of hoarding and profiteering as the number of COVID-19 infections is rapidly increasing.

Some cities are experiencing a shortage of epidemic drugs and materials due to the increase in the number of infections since early December and some people have capitalized on this situation by bulk buying large quantities of medicines and antigen test reagents and illegally reselling them at a profit.

Police in Shanghai released details of a case on Sunday involving four people who are under criminal investigation for having resold large quantities of antigen test reagents at a higher price since mid-December. They have made about 50,000 yuan ($7,200) from the profiteering.

The police also sent a stern warning to potential speculators that local authorities will firmly crack down on those found inflating the prices of epidemic materials.

Kunming police found that the six had posted advertisements for antigen test reagents on social platforms like Douyin and WeChat, at prices nearly four times higher than the market price, and that they were suspected of not being licensed to do so. The suspects were taken into custody the same day and the case has been transferred to the local market regulation authority for further investigation.

In another development, police in Shenyang, Liaoning province, busted a group of speculators reselling febrifuge and antigen test reagents on Dec 17.

Shenyang police found that they were selling an ibuprofen suspension, a kind of prescription febrifuge often used for infants and young children, at prices ranging from 2,700 to 3,000 yuan, about 46 times the original price, near a hospital.

They rounded up two suspects and seized 23,000 antigen test reagents and 13 bottles of ibuprofen suspension. One of the suspects said that he had bought the drugs from a pharmaceutical company for 65 yuan per bottle, and had resold 360 bottles to five dealers near the hospital for 90 yuan per bottle. The case is under further investigation.

Beijing”s market regulation bureau recently released details of a case involving a pharmacy that had raised prices for epidemic drugs, selling them for 6.4 times the original purchase price. The bureau issued a warning and fined the pharmacy 300,000 yuan.

Authorities have also strengthened supervision of the sale of medicines on social media and other internet platforms.

In a typical case released by the Hanzhong Market Regulation Bureau in Shaanxi province on Dec 23, a man in Hanzhong bought fever medicines and gave them to patients for free via online platforms as a result of shortages of the drugs on the market.

The bureau said that the man did not sell drugs without a license, and did not cause direct harm, but his decision to distribute prescription drugs for free on a public platform was very risky because he lacked a professional understanding of medicine and pharmaceuticals.

The clinic where the man bought the drugs has also been placed under investigation by the local healthcare department.

What to anticipate from AI in 2023 • TechCrunch

The Newest UK And EU Developments In Telehealth Regulation – Healthcare