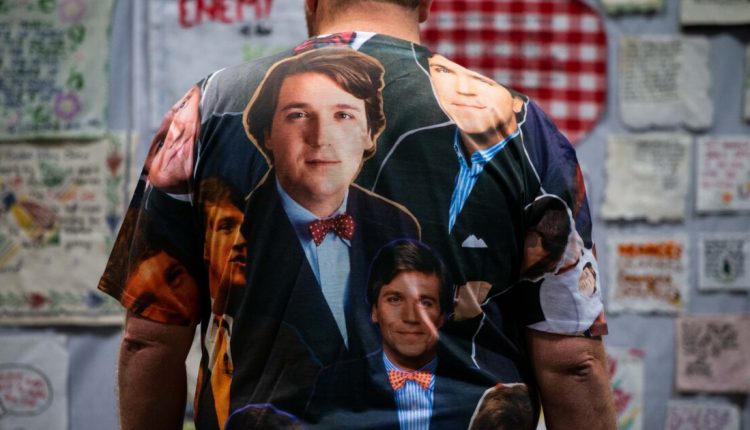 Big government conservatives benefit from the bias of the liberal media. Much of the US media is used to accepting left-wing formulations of economic policies and arguments – and that influences reporting on the conservative civil war over economic principles.

A significant segment of the right – from lawmakers like Sen. Josh Hawley (R – Mo.) To Fox News presenters like Tucker Carlson, traditional right-wing magazines like The American Conservative, and all sorts of ordinary Republicans – has started to sound very similar when it comes to private companies and government regulations. “In the current environment, if you grumble about how the system is being manipulated to help the rich and powerful at the expense of the working class, you need to double-check to see if it is from the far left or from the populist right,” notes Philip Klein from the National Review.

They are part of a “growing right-wing movement that challenges conservatives’ longstanding commitment to limited government and free enterprise” – one that “poses a potentially lethal threat to the decade-long conservative movement as well as the cause”. limited government, “adds Klein. (For more information, see Stephanie Slade’s” Is There a Future for Fusionism? “)

And an American press already biased against libertarian views of markets and economic freedom seems more than happy to give in to the story that this is a more enlightened, populist, or politically compromising form of conservatism.

Take this recent article on antitrust law in Washington Monthly, for example. Republicans who want to join the Democrats to expand antitrust law and use it to punish large or politically disadvantaged corporations are referred to as those who want to “fight the monopolists who have gained precarious levels of market power over the American economy has become more concentrated than in the USA “. at any other time since the Gilded Age. “Anyone who wants antitrust law to adhere to its current strategy of using consumer welfare as a guiding star is called a” pro-monopoly “.

The article is partly a profile of The Alliance on Antitrust, founded by Ashley Baker. The group aims to “align conservatives with the narrow and limited view of antitrust law popularized by Robert Bork in the 1970s and what is known as the ‘consumer welfare standard’,” notes Washington Monthly. This standard says that consumer interests – not breaking up businesses just because they are big, or artificial competition just for the sake of competition – should be the primary concern of antitrust enforcement. It is not a “pro-monopoly” argument, but an argument against excessive state intervention in the private sector and for a conception of antitrust law in which consumer protection – and not a specific economic ideology – comes first.

That even a few years ago Republicans would oppose such a standard in favor of a left-wing vision of cartel enforcement would be strange to say the least. But antitrust law is now seen as another tool in the fight against the Kulturkampf. “Large companies [are] increasingly viewed as the enforcement arm of the cultural left, “notes Klein, and” the demolition culture and anti-PC debates have become more stimulating to many conservatives than traditional social issues. “

The funny / sad / terrifying thing about all of this is the notion that the right-wing, who join the left’s efforts to more aggressively enforce antitrust law, are making these struggles “non-partisan”. Both Republicans and Democrats may want to expand state control over internet companies and private companies in general, but they have drastically different ideas about what would happen if they did.

Sure, the Republican Conservative wing that speaks out against free markets is nodding at getting big corporations to serve the people. And for Democrats / progressives – and media used to their framing – it means raising taxes and regulations to allow companies to cover things like Medicare for All, student loan waivers, “infrastructure” spending, and expanded health benefits. But the Trumpists and others who rail against “bright capitalism” and call for less free markets are not focusing on these things at all; They focus on getting companies deemed too socially liberal to pay for their perceived violations and partisanship in the culture wars. Its aim is to enforce a socially conservative idea of ​​the “common good” through economic sanctions against companies that do not adhere to their rules.

Neither the right nor the left will be happy when the other side is in control of these regulations. But one way or another, businesses, consumers, and economic freedom will suffer.

A major ruling on religious freedom is expected from the Supreme Court this week:

The case known as Fulton v City of Philadelphia, Numbers 19-123, is a dispute over city policies that prohibit discrimination based on sexual orientation. Citing the policy, Philadelphia dropped a contract with a Roman Catholic foster home that said their beliefs did not allow same-sex couples to be certified for adoption. The agency, Catholic Social Services, filed a lawsuit alleging Philadelphia violated its First Amendment religious rights.

The court’s verdict is likely to be published today.

Tech industry associations NetChoice and the Computer & Communications Industry Association are suing Florida over a new law that bans some social media companies from banning politicians. The new law, which provides a spin-off for platforms owned by Disney and other entertainment complex or theme park operators, allows citizens to sue tech companies that “deplate” any politician for whatever reason, and allows the Florida Electoral Commission to fined companies to punish those who do so up to $ 250,000 per day.

“Nobody, not even someone who has paid an application fee to run for office, has the right of the First Amendment to force a private actor to give a speech on his private property,” the new lawsuit states, which was filed in the US District for the Northern District of Florida.

“We cannot stand idly by as Florida lawmakers enact unconstitutional bills that bring us closer to state media and a state-run Internet,” said Carl Szabo, vice president and general counsel of NetChoice, in a statement. “The law is buddy capitalism masquerading as consumer protection. Our lawsuit will stop an attempt by the state of Florida to undermine the First Amendment and force social media sites to distribute offensive and harmful political messages.”

This shouldn’t be overlooked. There have been countless faux stretcher articles and tweets from Trump allies claiming no tear gas has been used and attacking journalists who alleged so. https://t.co/xzPGECHTZa

• Biden has promised that his tax cuts will no longer mean audits for people making less than $ 400,000 a year, and that it is only intended to catch ultra-rich tax opponents, not middle-class people making a little cash under the table . At the same time, its new budget promises to fund massive new spending initiatives with $ 717 billion in tax revenue over the next 10 years.

• New COVID variants are proving to be more transmissible, threaten to make the pandemic even more catastrophic in parts of the world without widespread vaccination and increase the chances of a new mutation that is not thwarted by current vaccines.

• Will the Food and Drug Administration (FDA) approve a promising new Alzheimer’s drug? “By June 7, the FDA is expected to make one of its most important decisions in years: whether to approve the drug for mild cognitive impairment or early-stage Alzheimer’s dementia,” notes the Washington Post. “It would be the first treatment ever sold to slow disease-related deterioration in brain function, not just relieve symptoms. And it would be the first new Alzheimer’s treatment since 2003.”

• Will the Supreme Court consider a positive action case in higher education?

• A former state prison in New York could become “a bustling regional center for growing and processing cannabis”.

• Illinois tries to prohibit police from lying to suspect children during questioning.

• Bill en route to Nevada Governor Steve Sisolak, a Democrat, “calls for the state to be the first to hold a presidential primary in the 2024 election,” The Hill reports. “If it signed a bill, it would convert Nevada’s competition from a caucus to an area code and move the state up on the nation’s electoral calendar, overtaking the Iowa caucus and New Hampshire primaries to first place.”

A Contributor’s Story with Soham Parekh