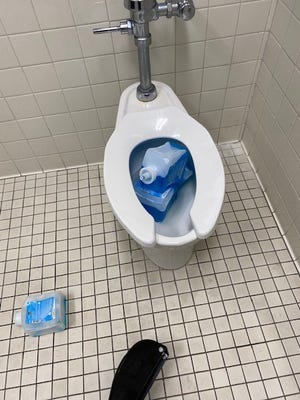 The leaders of the Lafayette Parish School System respond to challenges on the TikTok social media app encouraging students to demolish school property and “beat a teacher.”

In September, the popular app started a trend called “Sneaky Leaks,” encouraging students to self-register for theft and vandalism of school property, and teenagers across the country were arrested.

Lafayette Superintendent Irma D. Trosclair sent a letter to “LPSS families” Tuesday to inform them that the district is “not immune to this worrying trend”.

“School districts across the country are responding to theft, vandalism of school property and other behavior after students began posting videos of themselves on TikTok overcoming devastating challenges,” she wrote.

She said actions that may have started as minor pranks have become “costly repairs and replacements” and that stolen items have been difficult to replace during the pandemic.

It has also resulted in restricted access to bathrooms, the letter said. In fact, Acadiana High sent a message to parents in late September telling them that the toilets would be locked and locked for the last 5 minutes of each class, during the class change, and for the first few minutes of each class.

“This allows teachers to write hallway cards for each student who wants to use the toilet to keep track of who is on the toilet each time during the day and how long they have been out of adult supervision,” it says in the message. “This will increase safety for students and reduce the problems we have had with long lines, student disciplinary violations, and vandalism in the toilets.”

The Southside High leadership announced to students on Sept. 20 that there will be no tolerance and the school will seek criminal damages claims if a student is found stealing something or damaging property, according to KLFY.

“It is not our wish to punish students, but when this behavior occurs, it is unfortunately justified,” the statement said. “Please notify the authorities if you see items in your home that appear out of place.”

Trosclair’s letter appears to have been sparked by a new, “escalated” challenge in which children are encouraged to hit or beat a co-worker, “from property damage to violence”.

According to a list circulating on the Internet, the challenge in October is “hitting an employee,” USA Today reports. The challenges for the following months range from “screwing up school signs” and “flipping off the front office” to “kissing your boyfriend’s girlfriend at school” and “stabbing a chest”.

Trosclair said there would be serious disciplinary action against students who “are destructive or display inappropriate behavior”.

“Theft, vandalism and the beating of a teacher lead to the use of the police,” said the letter. “No exceptions are made for such behavior.”

TikTok previously told USA Today that it is removing content related to “devil licks,” including the hashtag #deviouslicks, and “redirecting hashtags and search results to our community guidelines to prevent such behavior.” According to USA Today, TikTok users have started using alternate hashtags to circumvent the ban.

In her letter, Trosclair urges students and families to seek positivity rather than these “ongoing challenges.” [that] Highlight the negative effects of peer pressure that can sometimes be found on social media. “

“We want to encourage our students to be proud of their schools,” she wrote. “Ask your student how a smile or a helping hand can brighten someone’s day. Small support services can have a bigger impact than going viral for a few seconds. “

Why TikTok is so obsessive about labeling all the things a trauma response.