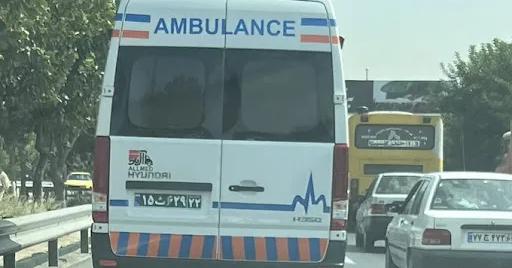 In the two weeks since the Iranian people have been protesting the murder of Mahsa Amini in morality police custody, social media users have repeatedly warned that security forces have used ambulances to arrest and transport protestors.

Several videos have been published that show ambulances standing in line in front of detention centers and police stations, or other facilities that are connected to the authorities in some way.

Some show arrested people being transported by ambulance. In one, young people recover several others who had been arrested and were going to be transferred to the detention center by ambulance.

A picture taken by a Twitter user shows a vehicle painted to look like an ambulance bearing a green number plate, which indicates that it belongs to the military and law enforcement forces.

Pro-government forces and official media have reported that ambulances have been set on fire, calling protesters vandals and rioters.

Health minister Bahram Einollahi claimed on Tuesday that during the first 10 days of protests, 72 ambulances had been destroyed.

“The country is facing a shortage of ambulances and difficult conditions have been created,” he said.

At the same time, many users on social networks, especially Twitter, have warned about the potential violation of international laws, asking the International Committee of the Red Cross to prevent this practice.

Why and how does the security apparatus of the Islamic Republic use ambulances to capture transport its detainees – and is this a new practice?

Nasrin Takhiri, a journalist who has been arrested several times, is among those who have reported on social media that such practices are not new.

She posted on Twitter: “Using an ambulance to suppress protests has a history. On 20 June, 1981, when they caught me, they closed Taleghani Avenue from Somayeh to Shariati and surrounded the crowd. Several ambulances opened their back doors at the intersection of Shariati and Taleghani and started shooting at the crowd. About 40 of us took shelter in a shop, but we were all arrested.”

Twitter users have also published an article from Mardom-Salari newspaper in April 2019, in which Saeed Ghasemi, the former commander of the Islamic Revolutionary Guard Corps (IRGC), told the newspaper that during the Bosnian war, the IRGC, under the guise of the Red Crescent and using vehicles representing that organization, gave military training to the Islamic Mojahedin forces and cooperated with Al-Qaeda.

Your correspondent himself witnessed an ambulance carrying detainees on February 14, 2011, the day the leaders of Green Movement were placed under house arrest at Karoun Shomali Street, between Dampezeshki and Tous in Tehran.

“At that time, I was a master’s student and a novice driver who was trying to get my car out of the parking to go home. Then I noticed a Toyota Hiace van, which was imported at that time for security purposes, right behind me “I was confused and was looking at the car through the mirror. Immediately behind this car, an ambulance was trying to clear the way with its siren. At the same time, someone got out of the driver’s side of the Hiace with a gun and urged me to move faster. After I pulled over, the Hiace van, the ambulance behind it, and a Peugeot left the scene. It was clear that there were people in the ambulance who were being escorted by the security forces in those two cars.

Numerous Reports have been received of the use of ambulances during the past two weeks of anti-government protests in Iran.

Hossein Ronaghi, a freedom of speech and internet activist who was arrested a few days ago, was attacked by security forces before his arrest. He saw that officers had come in an ambulance to arrest him. He was in his car and leaving the parking lot and managed to escape.

Ronaghi explained this experience in a video he recorded while escaping, which he passed to his journalist friend Masoud Kazemi to publish.

In a video published on the Twitter page of 1500tasvir, or 1500 Images, it is clear that an ambulance escorted by motorcycles from the security forces, with sirens blaring, entered a police station in Gonbad-Kavus city.

The 1500tasvir account had earlier published a video of ambulances queuing. The description of this video reads: “If you think this is a hospital with a row of parked ambulances, you are wrong. We live under the shadow of the Islamic Republic, and here is the IRGC barracks, and these ambulances are vehicles for suppressing protesting people.”

A user named Keyvan Tohidi also published a video in which an ambulance enters the yard of Sajad police station in Mashhad.

Another user named Lutter King published a short video of a person filmed from the window of his car standing next to an ambulance in traffic. In this ambulance sits a woman wearing a police uniform and a mask, and another man who looks like a security agent. The caption of this video reads: “Suppressors use an ambulance!”

The presence of this woman in the ambulance that transports security forces may explain a report published by the Mehr news agency, which is close to the IRGC.

On September 21, More revealed the presence of the first group of women from a special police force unit, FARAJA, set up to deal with the protests using video. The unit’s female commander said that this was the first official mission of women who repress women protestors.

Some users have mentioned the possibility of ambulance vans using special traffic lanes without attracting the attention of protesters. Some have pointed out that these are not real ambulances but are security and military vehicles that have only been painted as ambulances to mislead the protesters.

A user with the name Hashashin has published a photo taken from the license plate of an ambulance, which shows that this vehicle has a green license plate and belongs to the military and security forces.

Others have written sarcastically that they had learned to clear the way for ambulances, but now their trust has been damaged by the government’s use of ambulances to suppress people. This group of users is referring to the issue of public trust and opening the way for ambulances that probably carry their friends and companions and take them to be tortured and jailed.

Along with the increasing number of reports about the repression forces using ambulances for cover, some users have called the issue to be addressed by the International Committee of the Red Cross (ICRC), which aims to safeguard humanitarian law during conflict.

According to international regulations, military use of ambulances during war is a clear example of a war crime, but it is not clear what international laws stand against this initiative of the Islamic Republic, whose public have trust in ambulances.

In any case, the vehicle that is supposed to save lives is currently being used in Iran by forces that shoot directly at protesters, be they children, teenagers, old or young, and kill them. They are taken to detention centers where torture, insults, humiliation and inhumane conditions await them.

In tweets addressed to the Geneva-based organization, campaigners sent a message in English: “The Islamic Republic of Iran uses ambulances to detain and suppress protesting people. Where is the International Red Cross?”

The ICRC has not yet given an answer to these claims of the protesting people of Iran, but it seems that documenting this issue and handing it to human rights organizations may prevent it from happening in the future or, at least, bring consequences for this violation of laws and international regulations for Iran’s political system.