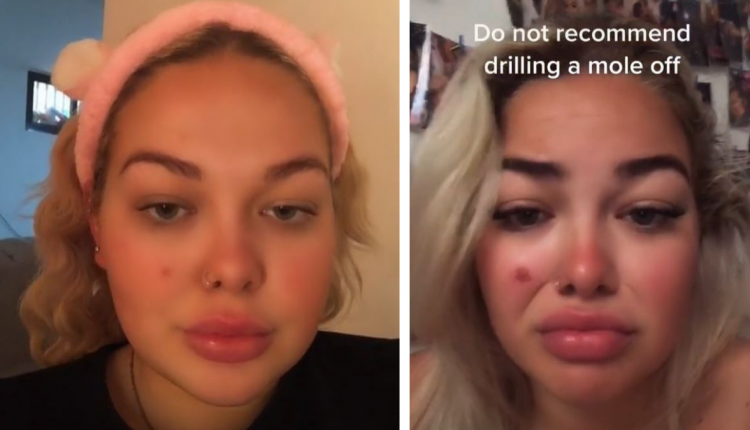 TikTok is known for some crazy viral videos and the latest one to take social media by storm is a woman trying to remove a mole on her face with a nail drill!

The TikTok star later stepped forward and admitted it was a mistake to use the nail drill on her face. Some people in the comment section even questioned her for taking this drastic step. Here’s a look at who the TikTok user behind the viral video is and why she took this drastic step.

The video was uploaded by a TikTok user named Lily-Rose Hockley. In the video, which has been viewed more than 3.2 million times, Lily tries to scrape off her mole with a nail drill.

She captioned the video, “Don’t recommend drilling down a mole.” In another video, Lily stated that she got the idea to use a drill from Google. The article she shows is from Healthline and the headline is, “Are These Effective Methods for Removing Birthmarks at Home?”

Several people in the comment section pointed out that the article mentions in bold face that “these methods have not been shown to work and some may be dangerous”. Lily defended her decision by stating that she decided to try the method because she thought it might work.

Since then, Lily has posted several videos letting her followers know about her face. The TikTok user indicated that she used a cream to fix her mistake.

Who is Lily-Rose Hockley?

Lily is a TikTok user from Spain who went viral for her drill video. She currently has over 2,000 followers on TikTok. Before her video went viral, Lily usually posted videos of her dogs or videos showing what she was up to.

Since that video, Lily has mostly posted updates on how her face was healed. She’s been constantly telling her followers about the products she used to fix the bug, taking a look at what her mole looks like days after trying to use a drill on her face.