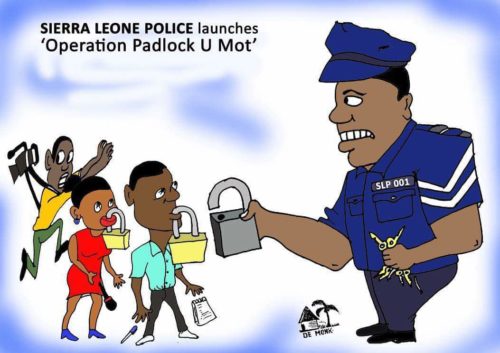 Our constitution also gives every citizen the right to assemble. Therefore, “freedom of speech” is not a privilege, but an organic necessity in a great society. The definition of free speech is unanimous. It is how we exercise our right to free speech that gives it a tributary life of its own.

So, what is freedom of speech?

Until President Bio tweaked it, several governments and especially the late President Siaka Stevens used it as a political sledgehammer against the opposition and dissenting voices. Interestingly, it was comparatively easier in those days, to identify authors and publishers to account for their words and stories.

The advent of the internet and social media has plunged the world into an anarchy of misinformation, disinformation and fake news etc. Is it any wonder now, that “freedom of speech” has become one of the most fluid, controversial and slippery concepts on the political and social landscapes?

Before the advent of the internet and social media, governments designed licencing and copyright laws as safeguards. We had authors and publishers to hold accountable. Today, we have a new breed of “bloggers” and “influencers” who sometimes remain faceless and elusive. Voice changers are used to hide identities. Those who host such websites and social media platforms continue to use disclaimers as shields to absolve themselves of any responsibility. Some platforms use fact checkers, as the name implies, to decipher facts from fiction. Is that in recognition of the potential harm that freedom of speech could engender? Does that mean that being offensive can be an offence these days? Sadly, such offences spill on from individual to collective groups, which can be religious, tribal, racial, gender etc. This is what gives rise to generational and collective revenge.

It is not surprising that like other countries, Sierra Leone faces major political challenges evolving from the dark side of the information highway. The traffic light system on the information highway is not only difficult to regulate, but equally near impossible to balance between freedom of speech and censorship.

Is there a need for censorship on social media?

Censorship is a word that naturally generates the abuse of freedom of speech. With the fluidity of information in social media, and with the inherent risks of harm being perpetuated, is it time for stringent censorship?

What would such censorship mean for the rights to free speech and freedom of speech? Before we hasten to condemn censorship wholesale, it might be worth noting that censorship already exists with the approval of society. We already use censorship to protect vulnerable sections of society. Take the film industry for example. We have X rated films, films that require parental guidance (PG), and TV shows you cannot broadcast before certain times (watershed). Law enforcements spend millions of hours trawling the internet, albeit with difficulty to protect minors from predators.

In many communities, gory images are blacked out, pixelated, or redacted. Websites and domains are taken down without consent to prevent harm. Programme makers now accompany some shows with apologies for “anything viewers might find offensive or disturbing”, and in addition offer support. It might sound, “Woke”, (alert to injustice) but it is also human decency. Is that not censorship? Is that not necessary censorship?

Social media may have given franchise and a voice to the previously voiceless and unheard. It has taken the power of the media from the hands of the few to that of the masses. Some see social media as democracy in communication. It is everybody’s and nobody’s, to ply the good, the bad and the ugly around the world.

Sadly, it is the hazards and harmful sides of social media that take prominence in societies and communities. At face value, you would think that the benefits of social media are massively outweighed by the harm done by the unruly and unknown mob.

We cannot deny the fact that the risks posed by social media, if not “unregulated” have the potential to destroy communities, break down cultures, dismantle status quo, and wreak untold damage. Lips sink ships. The destabilizing effect of an unregulated social media cannot be overemphasised.

Unfortunately, some of our media outlets in Sierra Leone have no compunction in splashing pictures and images of accident victims, the dead and the infirm. Just scroll through your video clips of August 10, 2022, and see rioters trying to kill a man that was already dead.  It made the front-page news in all its glory.

Instead of trying to save their fellow humans, some were busy getting the best shots during a recent boat tragedy. You wonder what these people would have done if they had witnessed the Titanic. Selfies or Photoshop?  Do these editors and publishers know the desensitizing effects such images have, especially on young minds? Do they care about the dignity of the dead and their families?

Moreover, what does the Independent Media Commission (IMC), which claims as its central vision “To protect the interest of journalists and protect the public against exploitation or abuse by media institutions”, about that?  With the freedom of speech, and the freedom to choose, it is the associated responsibility to choose that determines individual differences.

Is self-regulation the answer?

We used to live in a world where people searched for the truth. We now live in one that we run away from the truth. It is a time of deceit, where telling the truth is a revolutionary act and a treasonable offence. As governments throughout the world, rewrite rules, regulations, laws and guidance to keep up with the fluidity of the internet and social media, “cybercrime” has insidiously waltzed its way into the legal, political and social parlance and frameworks of society.

When President Bio tweaked the Criminal Libel Law of the Public Order Act, 1965, the relief among media merchants was palpable. The irony is, more people received invitations to the Criminal Investigations Department (CID) headquarters in record numbers. They included members of the political oppositions, public servants, and even Blacker, who was diagnosed by the public assessment as mentally bankrupt.

Under the guidance of Dr Sovula, it became almost weekly press releases about such invitations. Most of these invites were for the “guests”, to explain social media clips, utterances or other alleged misdemeanours. Was the increase in numbers, a reflection of the authorities tightening the screws on law and order, or to intimidate and muzzle free speech? (Photo: A mentally ill man in Sierra Leone by the name of Blacker, criminalsed by the police for exercising his right to free speech).

Could it have also been a sign that having decriminalised or tweaked the Criminal Libel law, some people, like kids in a candy shop, did not know what to do with the newfound freedom? Either way, there was a measure of excessive enthusiasm somehow.

Irrespective of your views on the freedom of speech, we can agree on certain facts here. The world is afflicted by a misinformation pandemic. We are all victims of the misinformation virus and trapped in the info-wars.  “Fake news” is the new currency.

There is no guarantee that accurate information would ensure self-regulation, just as freedom of speech is no guarantee for freedom after speech. Nevertheless, it is a step, and a journey of one million miles starts with a step.

Is censorship a necessary evil?

How can we clamour for free speech if we are not ready to take responsibility for our right to free speech? Should I falsely shout “fire” in a packed cinema hall because it is free speech? Can we eat our cake and have it back? We are at crossroads, and we face a crisis of responsibility. This is no longer just about pleading for freedom of speech, but also to ask what it really means, and how we can sustain and regulate it. Can we achieve that by silence?

How do we protect, defend, and uphold the right to freedom of speech without infringing on the rights of others. How do we ensure the security of a nation without taking steps to enforce the law against perpetrators? Who decides what free speech is and what is not? What is the threshold for free speech and criminal responsibility after speech? How can we protect the freedom of expression against the abuse of power?

Do we have enough safeguards to ensure that the right to free speech is not lost in the quagmire of national security?   When we decide to use our freedom of speech in a harmful way, are we not destroying the responsibility that comes with the very freedom of speech we claim to defend?

Sadly, this brings us to August 10, 2022. A major theme in this saga is “Incitement”, and the Sierra Leone diaspora is rightly or wrongly heavily linked in the equation. Incitement conjures a sense of gullibility and vulnerability.   It would be contemptuous to comment on the veracity of that, while investigations are on going.  Interestingly, one of the first and common phrases an immigrant learns on reaching the West is: “This is a free country”.  America is fondly called “the land of the free”.

Many of us in the diaspora came to the West, on the back of asylum claims and refugee status. Words like freedom, freedom of speech, harassment, victim, and many more, conveniently found their way in those applications for asylum or refugee status. Have we forgotten what drove us from our motherland in the first place?

The relationship between the Sierra Leone communities across the diaspora and the motherland is well documented, and Western Union, Afro International, Remitly and Money Gram can testify to that. Sierra Leone’s GDP shares an umbilical cord with its diaspora community.

Many are dreaming of going back to make a difference or to retire. All the political parties in Sierra Leone have appendages in the diaspora, and the yearly fund raising for those political parties are calendar highlights. Every political leader including EBK, Bio and Yumkella meets with their supporters as part of their itineraries when they travel abroad. Sierra Leoneans in the diaspora add flavour to the Christmas pilgrimage and plumage. Even the rate of the dollar plummets during the “Jesse” season. Therefore, while living in free countries, was “incitement” the best export commodity.

Imagine Pa Santigie’s view about the diaspora, after losing his police son and being told that the midwives for the riot reside abroad? What about Aunty Jenneh’s, losing her only okada-riding son during the saga? You would hope that the actions of the minority do not tar the majority with the same brush.

While no one is disputing the naked facts of hardship in the country, Sierra Leone cannot claim monopoly on the world crisis. Equally, the administration cannot absolve itself of some responsibility and as partner in these difficult times. While some see riots, protest and demonstrations as the voices of the unheard, our rights to do so must be PEACEFUL.

Our rights to freedom of speech should not infringe on the rights of others. We cannot pretend all is well. The people have the power to revoke or renew any political party’s licence to rule. If we seek alternative governments, there is a process, and it should be free, fair and peaceful. That process should be of the people, by the people and for the people. Violence is neither the way, the language or the process.

While investigations to bring the culprits to justice is on-going, we pray and hope that we don’t make martyrs of them. If a dog bites you, you don’t bite it back. An eye for an eye will only make the world go blind.

Don’t forget to turn the lights off when you leave the room.