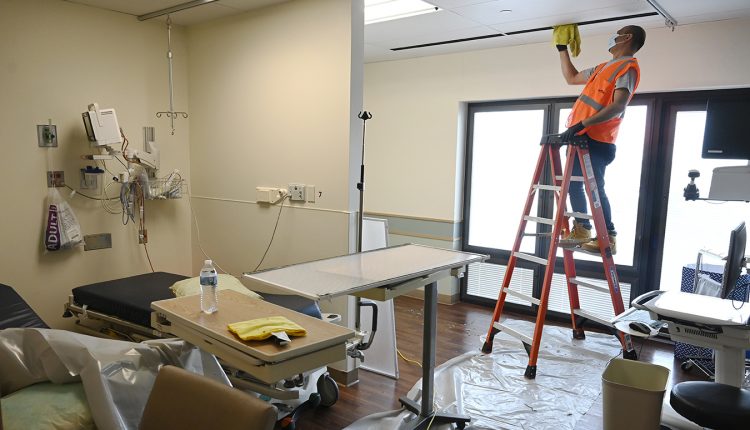 
The Colorado wildfire that destroyed more than 1,000 homes last month has forced the temporary closure of a hospital and upended the lives of health care workers as the state’s already strained health care system braces for another surge in covid-19 hospitalizations.

Avista Adventist Hospital in Louisville, a community outside Boulder that was devastated in the wildfire that erupted Dec. 30, has been closed due to smoke damage and officials have not announced when it might reopen. In addition, at least 36 people who work in hospitals in the region lost their homes, while others sustained smoke damage to their homes that may prevent them from returning home.

The temporary loss of a single 114-bed hospital out of more than 25 hospitals in the Denver-Boulder metropolitan area might not normally be cause for concern. But it comes at a time when the state’s health care system is near capacity, health workers are stressed by the nearly two-year-old pandemic, and hospitalizations are rising as the omicron variant drives a new spike in covid cases.

“We have been stretched in our capacity for months now,” said Cara Welch, a spokesperson for the Colorado Hospital Association. “We have been mostly over 90% capacity for ICU and acute care beds. So, any loss of bed availability is challenging.”

On Jan. 7, covid hospitalizations were up 37% compared with a recent low on Dec. 25 of 1,055 hospitalizations. About 94% of acute care hospital beds were full as of Jan. 7. Hospital bed capacity reflects not just the physical beds, but also the health care staff needed to support those patients. State health officials say Colorado likely won’t see the peak of the omicron surge for a couple of weeks, and it’s difficult to predict how many hospitalizations may result.

“While bed availability statewide and across all hospital systems remains at a level that is concerning, the state is closely monitoring the impact of the Marshall Fire,” Colorado Department of Public Health and Environment spokesperson AnneMarie Harper said in an email.

The highly transmissible variant has resulted in a huge spike of cases in the U.S. and Colorado, but hospitalizations have not risen proportionately. Still, the sheer number of new cases translates to a significant rise in hospitalizations. The number of hospitalized covid patients in the U.S. is up more than 50% in the past two weeks, according to The New York Times Covid Tracker.

The Marshall Fire killed at least one person and destroyed 550 homes in Louisville, 378 in the nearby community of Superior and 156 in unincorporated parts of Boulder County. Seven commercial structures were destroyed, and an additional 30 businesses and 149 homes were damaged.

A video of the Avista Adventist Hospital parking lot during the Marshall Fire. (Centura Health)

Hospital workers used water buckets and hoses to beat back flames that came within yards of igniting flammable liquid-oxygen tanks outside the building. Inside, doctors and nurses moved 51 patients to safety before ambulances drove them to nearby hospitals or they were discharged.

“The fire was raging and moving along so quickly. The fact that we are here is nothing short of a miracle,” said president and CEO Isaac Sendros in recounting the two-hour ordeal.

A handful of staffers working that afternoon had homes in the direct path of the fire. After making sure their families were safe, they selflessly stayed to take care of patients, said Sendros.

Reopening as quickly and safely as possible is now the top priority, he said, though he did not provide an estimate on when that might happen. The hospital had no running water. A crew of 100 people worked to repair the smoke damage and employees had been temporarily reassigned to area Centura hospitals, Sendros said.

“The sooner we can reopen, we can also help our community heal,” he said.

Welch confirmed the Marshall Fire puts additional strain on a health care workforce already stretched thin. “Community spread of omicron is incredibly high, so staff are getting sick and quarantining, and we have the impact of the fire on top of that. There is a lot that is driving the staffing issue right now,” she said.

Minutes away from the Louisville hospital, Shelley Shields, a forensic nurse examiner at St. Anthony North Hospital, received a text at home from her boss on Dec. 30 alerting her that the threat from the blaze was growing more serious.

Shields was at her home in Louisville’s Coal Creek Ranch neighborhood with her husband and two teenagers. The smoke was thick and ashes floated in the air. They turned off the house’s furnace, put on masks and frantically collected childhood photos and other keepsakes before fleeing with their dog, cat and hamster.

“We thought we would be home the next day,” said Shields. Instead, they returned on Jan. 3 to find the home destroyed.

The hospital and her husband’s employer have allowed them to take time off work and consider their next steps. She said that dealing with the fire’s aftermath only adds to the tremendous stress that she and other health care workers were under from the pandemic.

She doesn’t know when she’ll go back to work, and hospital officials said she could take off as much time as she needs.

Play Sonic on TikTok With This Collaboration Impact