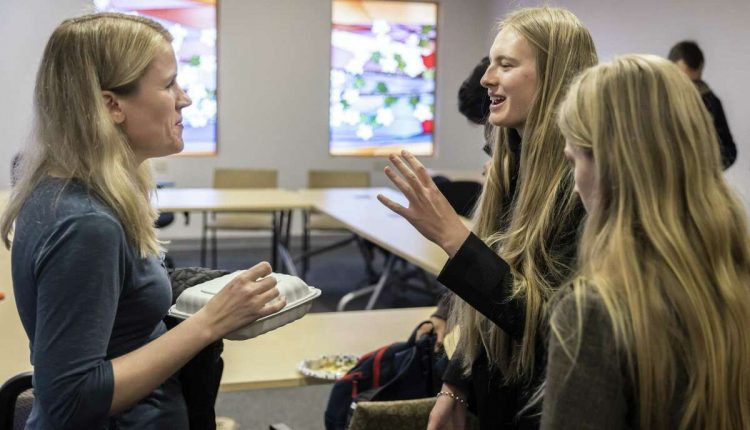 Not far from where Frances Haugen is sitting on Stanford’s White Memorial Plaza, a black sign taped to a lamppost asks passing students: “If you could change Google and Facebook by not working for them, would you?”

Haugen, the former Facebook, now called Meta, employee and whistleblower who disclosed thousands of pages of internal company documents, doesn’t think students at Stanford or elsewhere should go quite that far.

She said she didn’t believe tech workers, including Meta CEO Mark Zuckerberg, were acting maliciously, but that the company needed to be held accountable for many decisions, “Where they were unwilling to weigh off 10% more misinfo for 0.1 percent less profit .”

Haugen speaks fluently in what feel like paragraphs of thought, her blue eyes both intense and friendly as she reels off data about Facebook users, markets and metrics. She gamely answers questions directly, but often bends her responses back to how she feels companies like Meta should be subjected to increased oversight.

Haugen shot to notoriety last year when she identified herself as the source of a massive tranche of internal documents and research from Facebook. Handed over to the Wall Street Journal and the federal government, the leaks covered everything from the company’s own research on how its products impacted the body image of young women and girls, to how the site could be used to amplify toxic content which in turn drove engagement and profits.

The company has said much of the research that was taken out of context and shown in a negative light by the media.

“Our limbic systems get triggered by threats,” Haugen said. “What we’re seeing here is software companies that have figured out how to be more profitable,” by amplifying certain emotionally activating posts. “They’ll do whatever it takes to keep people on their services longer.”

Frances Haugen, a data scientist who came forward as a whistleblower against her former employer Facebook, speaks with Zoe Van Gerlach at Stanford University.

She said part of her reason for coming to the tech worker proving ground of Stanford “Is to teach young people about how to [do] whistleblowing,” instead of avoiding working for tech companies altogether.

She also wanted to talk with students about open source integrity, “Which is building both tools for monitoring Facebook, but also for understanding Facebook.”

She pointed to Facebook buying the social media tracking tool CrowdTangle in 2016 and said she hoped to build an open source version built on a similar idea from the days before it was bought.

Students also can’t take a class yet on the dynamics of social networking for example, she said, but Haugen hopes that will change in the future, at Stanford and elsewhere in part due to her efforts.

Instead of warning young minds away, Haugen said she also wants to see real changes to how social media companies monitor how content is shared, and more transparency around how malicious content is flagged and potentially taken down.

Point in case is the Russian invasion of Ukraine.

Asked what she thought of Meta’s restricting of Russian state media in Europe on its family of apps during the invasion of Ukraine, Haugen said she felt the move was “theatrical” and that it ignored the company’s duty to more robustly take down fake accounts and groups that had been built up by Russia and Ukraine. Those networked groups and accounts can create “manufactured virality” to push out a message that contains false narratives that are beneficial to one government or another.

The company does take down accounts and information associated with vaccine misinformation for example, as well as militant groups and malicious state actors.

Haugen said her time at Facebook had shown that the company had many tools to detect and deal with networked disinformation, but “The problem is the teams that are staffed to actually take down those networks are radically understaffed.”

The company says it has more than 40,000 people working on safety and security. 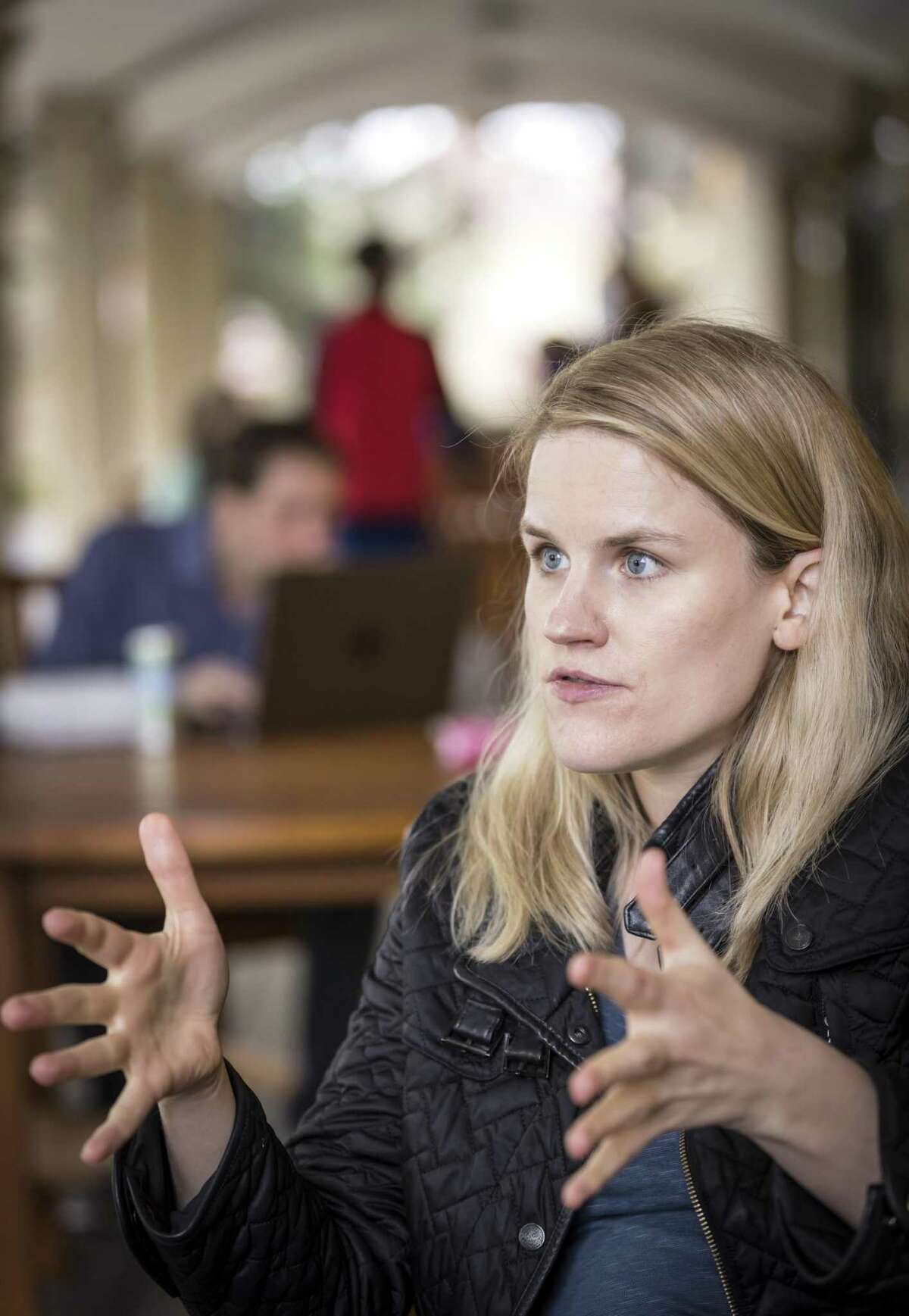 Frances Haugen, a data scientist who came forward as a whistleblower against her employer Facebook said she doesn’t discourage tech workers from taking jobs at companies like Meta, which owns Facebook. She spoke to tech students at Stanford on Thursday.

Haugen said that she also wants to see more transparency from the company around what they do and don’t act on.

“I think it’s really reasonable for the public to articulate things like ‘Facebook should be able to detect if governmental officials are being sent targeted misinformation,’ ” she said.

While there has been much talk of federal regulation of Meta and other social media companies, state governments are beginning to probe them, particularly with regard to how they affect the health of children.

Earlier this week The California Attorney General’s office announced it was working with other states to investigate TikTok, owned by Chinese internet company ByteDance, and how it affects and targets children. That comes on the heels of an ongoing state investigation targeting Instagram, which Meta owns, over similar concerns.

Haugen’s Thursday tour at Stanford ended with an off-campus dinner with students at a nearby hotel ballroom. The event was advertised with a billboard truck emblazoned with her face asking, “Are you brave enough to blow a whistle?”

Bright orange plastic whistles dotted the white tablecloths at the dinner. The group was later encouraged by an event organizer to blow them in unison.

Over a buffet dinner that included grilled salmon and a mound of prosciutto, students asked Haugen how they could whistleblow in their future careers, and how good people can work at companies that don’t always do good things 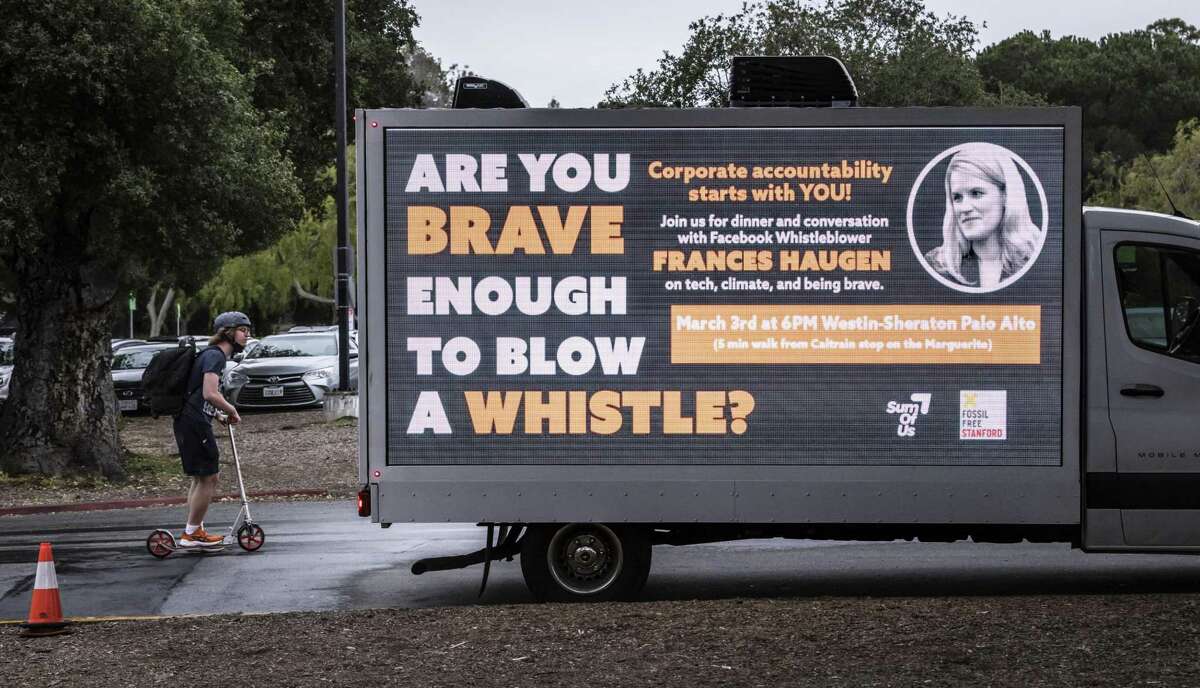 A student rides by a truck advertising event with whistleblower Frances Haugen at Stanford University.

Haugen said people do speak up internally at companies like Meta when they see something they feel is wrong, but the organizational structure of the company that emphasizes independence over top-down leadership means it can be more difficult to affect institutional change.

Standing at a podium under a powerful light as a rolled camera, Haugen told the assembled group that they “Have a larger responsibility today than technologists did before,” given the speed that the industry is moving and the sluggish pace of government in keeping up and protecting the public from its potential ill effects.

Chris Rilling, a senior studying economics and working on a masters in computer science at Stanford, said the idea that one of his fellow students could soon be in a position of influence in tech made him think about the outsized impact of the industry. Rilling is also part of Fossil Free Stanford, a group working to divest the university from fossil fuels that recently filed a legal complaint against the school over the issue.

Judging by their questions after Haugen’s talk, most students seemed to admire the steps she had taken. One student thanked her for her work before launching into his question, while another prefaced hers by stating that she was in favor of boycotting working for big tech companies.

Haugen said she doesn’t judge people for taking jobs in big tech, “We don’t know their circumstances,” she said, adding someone might need the paycheck to care for an ailing relative.

After Haugen made her exit to a round of applause, students were asked by an event organizer to raise their hands if they would consider boycotting working for Facebook or Google. About half of the remaining group raised their hands.

$35 Insulin Cap Is Welcome, In style, and Bipartisan. However Congress Might Not Cross It Anyway.