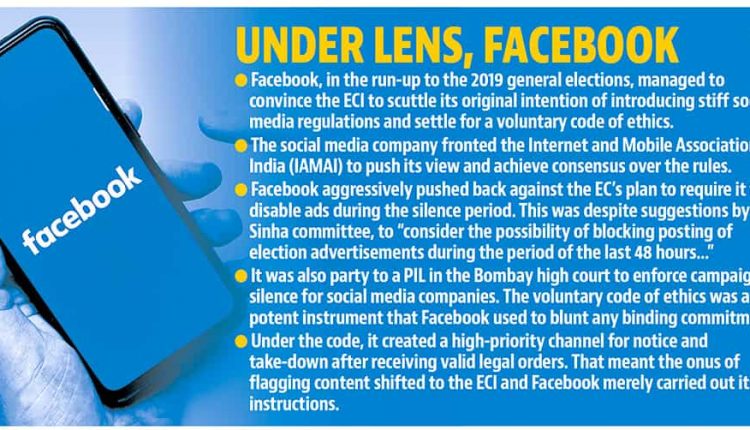 In the run-up to the 2019 parliamentary elections, internal Facebook documents state that it has succeeded in convincing the Indian Electoral Commission (ECI) to thwart its original intention of introducing strict social media regulations and settling for a voluntary code of ethics to avoid additional legal obligations. The social media company stood before the Internet and Mobile Association of India (IAMAI) to voice its opinion and reach consensus on the rules, as evidenced by Facebook’s internal documents, published by whistleblower Frances Haugen from the Companies were brought out.

The ECI, as the documents show and former government officials independently confirmed, wanted a strict regulatory framework for social media, perhaps not new legislation (or a change to an existing one) in time for the elections.

The EK spokesman said he was unfamiliar with Facebook’s internal report, but the claim does not appear to be correct. “Political advertising on electronic media, including social media, is always prohibited during the silent period. Section 126 (1) (b) of the RP Act 1951 prohibits the display of electoral matters (including political advertisements) by television or similar devices (electronic media) during the 48-hour period ending with the hour in which the election is completed is determined, “the EC spokesman told HT and The Intersection.

“And under the VCE (Voluntary Code of Ethics), platforms had committed to act in violation of Section 126 of the RP Act 1951. For this they had created a special reporting mechanism for ECI in accordance with the provisions of the VCE. “

A meta-spokesperson said in an email response to The Intersection and The Hindustan Times, “Promoting the integrity of the elections in India is not something we can do alone. Before the 2019 general election, we joined other social media companies in a voluntary code of ethics for parliamentary elections with the Election Commission of India (ECI). “

In July 2018, the Commission set up a committee headed by then Deputy Election Commissioner Umesh Sinha to propose such a framework. In its draft report, accessed by The Intersection and HT, the Committee recommended that “the Commission may issue instructions to social media agencies to ensure that there are no political advertisements on their platforms during the prohibited 48-hour period referred to in Section 126 is uploaded “.

While the original remit of the committee, which presented its report in January 2019, was to “examine social media regulation during the survey period”, it finally focused on the last 48 hours before the actual vote, or what is known as the “rest period”. . The recommendations contained in the draft report have not yet been reported.

On May 29, 2019, five days after India’s general election ended, officials from the Facebook Civil Integrity team shot a memo to the rest of the company. It was an aftermath report of sorts, listing everything the company had done during the polls; from proactive monitoring to taking action on content flagged by the ECI and promoting the Voluntary Code of Ethics (VCE) that governs social media platforms.

It was a great relief to the Menlo Park, California-based company that had just emerged from a bruise scandal surrounding controversial election management company Cambridge Analytica. Facebook (now meta-platforms), as the memo shows, was determined to avoid burdensome legal obligations. It wanted to do the bare minimum to avoid a backlash later, former Facebook officials told The Intersection and HT.

Outlined in Part 1 of a document entitled “India Elections: A Case Study”, it included preventing “poor regulation or social media laws on electoral integrity” among other platform-specific goals such as combating misinformation and fake news. .

These details come from redacted disclosures made by Haugen’s legal advisors to the Securities and Exchange Commission and the United States Congress. The edited versions received by Congress were reviewed by a consortium of news organizations, including The Intersection, which published a series of stories based on the documents and in association with The Hindustan Times.

Facebook, several people confirmed, aggressively opposed the EC’s plan to turn off advertising during the silence period. This was in spite of the Sinha Committee’s proposals to “examine the possibility of blocking the publication of election advertisements during the last 48 hours…” between the IAMAI and the ECI.

Referring to a communication dated March 23, 2019, the EC spokesperson reiterated that “TV / radio stations and cable networks / internet website / social media platforms should ensure that the content of programs broadcast / broadcast / of them shown during the 48 hour period referred to in Section 126 contain no material, including views / objections, from panelists / participants that may be construed as affecting the prospects of any particular party or candidate or candidates promote / impair or influence / influence the election result ”. This also included the display of opinion polls and standard debates, analyzes, visuals and sound bytes.

It was also party to a public interest litigation in the Bombay High Court to enforce the campaign’s silence for social media companies. “With the help of the voluntary code of ethics and the continued cooperation with ECI, we were able to avoid an onerous and prescriptive instruction from the Bombay High Court,” says an internal Facebook memo. The VCE was a powerful tool Facebook used to weaken new binding commitments.

In a section titled “Ethics Election Committee: The Incredibles,” Facebook states, “This [VCE] was a significant development that has helped our family of apps continue to operate within the existing legal framework without creating a new electoral law or poor regulation. ”The Code created a high priority channel for notification and removal after applicable legal orders received. This meant that the obligation to label content was shifted to the EBI and Facebook only followed its instructions.

Sahana Udupa, Professor of Media Anthropology at the University of Munich and Joan Shorenstein Fellow at Harvard University, told The Intersection on the phone: “The voluntary code set up during the 2019 general election was weak and inadequate, not least because of its nature and Way how it was created. “

Facebook was alarmed that the ECI was planning to put in place a legal framework for platforms requiring them to proactively monitor and remove content, including disabling all ads during the silence period. “They also wanted us to proactively inform users about the electoral laws in connection with the silence period for each election round.” In the end, the VCE simply said that the participants are committed to compliance with the transparency of paid political advertising and have set up a mechanism to expedite action requests from the ECI.

In the memo, a Facebook official wrote: “We made sure that our primary trade association, IAMAI, was involved in the negotiations on behalf of the industry so that bad recommendations would not be made. In the end we managed to get a text that corresponded to the intermediary protection for tech platforms. ”Despite repeated inquiries, IAMAI could not be reached for comment.

Udupa said by negotiating with the ECI through a body like IAMAI, social media companies had secured the buffer of an association to agree to a voluntary code. “Such a double distancing on the part of the social media companies – firstly from direct parties and secondly from enforceable obligations – has shown that the voluntary code agreement was weak from the start.”

In stark contrast, Facebook disabled new political ads on its platforms for seven days prior to the 2020 presidential election, even though there is no concept of a period of silence in the US. A former Facebook official said the company wanted regulation, but in reality “they are trying to shape regulation the way it works best for them”.

The ECI pulled you back when the content was removed. Facebook’s original position on content removal, multiple sources confirmed, was a maximum of 72 hours, in accordance with the then version of the IT Act of 2000. The Sinha Committee wanted it in 24 hours. An EC official told The Intersection and HT that while there is a request from social media companies to increase the time it takes to remove content. The commission stood firm and asked them to remove any labeled material within three hours. In the end it was two hours.

It worked in favor of Facebook that the election commission was under time pressure. An amendment to the electoral law, the Representation of People Act of 1951, the ECI official added, would have taken a while to go through parliament. So a voluntary code was a good idea. “At the time, it was assumed that a change would take some time to process and so the voluntary code was seen as better through the media,” said the ECI official.

“Our priority was to have a framework in which complaints can be dealt with quickly and which all social media companies adhere to.”

A former EC official who worked on the voluntary code said, on condition of anonymity, that it was not the Commission’s mandate to legislate. “The Commission doesn’t make the laws. Whatever compliance is required has to be enshrined in law, and as such the EC had given the IT ministry recommendations on what to include. “

It is true that the report of the Sinha Committee recommended the addition of the term “electoral matter” in the draft information technology [Intermediaries Guidelines (Amendment) Rules, 2018]to “appropriately address concerns about the abuse of social media for electoral purposes, particularly during the prohibition period”.

In September 2019, the ECI ordered that the VCE should be used in all future elections, including elections to legislative assemblies. At that time, Haryana and Maharashtra were going to vote.

While the code was doing its job, a senior IT department official told The Intersection and HT that new legislation was needed as it was no longer about the larger platforms. “It applies to everyone, including the little ones. And when there is no legislation, the code should be evolutionary and reflect changes in prevailing conditions, ”he said.

(Venkat Ananth is co-founder of The Intersection, published by The Signal, www.thesignal.co)