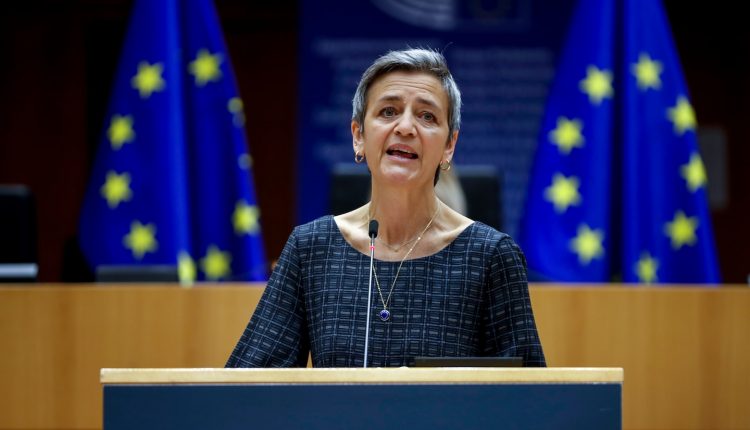 Europe is lapping the U.S. on tech regulation — once more

On Thursday, the European Union finalized a landmark proposal known as the Digital Markets Act (DMA), aimed at blocking the world’s most powerful tech companies from squelching competition. In coming months, the bloc is poised to advance another sweeping measure to tighten regulations around how tech companies police content on their platforms, called the Digital Services Act (DSA).

Together, the proposals will create perhaps the most wide-reaching regulations for the Internet globally since the EU passed its sprawling data privacy rules, known as the General Data Protection Regulation (GDPR).

While US efforts to match the EU’s privacy rules have been languished for years in Washington, there’s been growing bipartisan momentum on Capitol Hill to pass new laws on digital competition and content moderation. That has led to the introduction of a flurry of bills that together would mirror some of the most punishing restrictions the EU is now poised to enact.

representative David Cicilline (DR.I.), chair of the House’s antitrust panel, on his legislation to block the tech giants from favoring their own products:

But even if US lawmakers manage to pass many of their most ambitious tech reforms, the sum of those bills is unlikely to match the sheer scope of Europe’s incoming rules.

The dynamic highlights the uphill battle US policymakers face in setting rules for the Internet, which up until now have been crafted almost entirely by foreign governments and at times US states.

That includes blocking the tech giants from giving their own products preferential treatment, prohibiting app stores from requiring that developers use their payment systems, and requiring that major platforms make their services interoperable with competitors’ products.

The Digital Services Act, meanwhile, would require that large companies open up their platforms to external researchers, that they disclose information about their algorithms to regulators and set tougher restrictions around how they can target users with digital ads.

Accountable Tech, a left-leaning advocacy group, argued in a policy memo comparing US and EU tech reforms that Europe’s incoming regulation “reads like an omnibus bill written by top American lawmakers” because of its overlap with many US proposals.

The memo, shared with The Technology 202, notes that there are “corollary proposals put forward by leading US policymakers” that match various aspects of the DMA and DSA, “many of which have bipartisan support.”

Indeed, US lawmakers have introduced a barrage of bills that together would prohibit companies from favoring their own products, purely in app store practices, force social media platforms to be more transparent with researchers and regulators, and restrict targeted advertising online, among various other aspects of the EU regulations.

But barring an unprecedented string of tech legislating on Capitol Hill, it’s unlikely that every one of those US counterparts will be signed into law in the near future.

And many of Congress’s most aggressive measures that in some ways go farther than the EU regulations — including bills to block the tech giants from scooping up budding rivals and to make it easier to sue to break them up — have yet to gain significant traction in Congress .

That means that in all likelihood, Congress may only be able to pass a portion of the reforms that are already slated to take effect this year in Europe, putting the US policymakers behind their European counterparts yet again when it comes to setting rules of the road for the Internet.

“The fact that they’ve reached an agreement on such a sweeping set of reforms … should both inspire activists and force US lawmakers to reckon with the reality that if they don’t pass legislation, the rules of the digital economy will continue to be written without them,” said Accountable Tech co-founder Jesse Lehrich.

When regulators in Washington first tried to investigate Tesla, CEO Elon Musk what irate, The Washington Post’s Faiz Siddiqui reports. But since, they have adapted their strategies and opted to “show some spine to win his cooperation,” Faiz reports.

According to the report, “officials have learned to work with Musk, using a combination of pressure, flattery and threats to persuade him to comply with federal safety measures, according to a half-dozen former regulators, some of whom spoke on the condition of anonymity to discuss sensitive matters. In the past six months, Tesla has issued at least a dozen voluntary recalls, a dramatic turnaround for a company known to quietly issue software updates direct to cars — without alerting the public — to fix sometimes alarming safety problems.”

Tesla and Musk did not respond to specific questions in a detailed request for comment. Musk said in an email, “For the 100th time, please give my regards to your puppetmaster,” referring to Amazon founder Jeff Bezos, who owns The Washington Post.

House and Senate leaders are looking to revive privacy legislation

Aides to top Democratic and Republican lawmakers are slated to meet as early as this week to try to find consensus on data privacy legislation, the Wall Street Journal’s John D McKinnon reports. Efforts to pass a comprehensive federal privacy bill have been stalled for years on Capitol Hill.

“The discussions are expected to center on measures that have been proposed for years, but never written into law — including clear rules on what personal information is off limits to businesses and the rights of individuals to control data collected on them,” McKinnon reports.

The meeting is being organized by Rep. Frank Pallone Jr. (DN.J.), chair of the House Energy and Commerce Committee, according to the report. Aides for Sens. Maria Cantwell (D-Wash.) and Roger Wicker (R-Miss.), leaders of the Senate Commerce Committee, and Rep. Cathy McMorris Rodgers (R-Wash.), the ranking member on Pallone’s panel, are also expected to attend.

“US officials have long said that running Kaspersky software could open American networks to malignant activity from Moscow and banned Kaspersky’s flagship anti-virus product from federal networks in 2017. Moscow-based Kaspersky has consistently denied being a tool of the Russian government,” Shepardson and Satter report.

Kaspersky said in a statement to Reuters that it was disappointed in the FCC decision, arguing it was “made on political grounds.” The move was “unsubstantiated and is a response to the geopolitical climate rather than a comprehensive evaluation of the integrity of Kaspersky’s products and services,” the company said.

Am giving serious thought to this

The Intercept’s Ken Cliffstone reacted by tweeting articles about Musk cracking down on dissenting employees.

The Chamber of Progress, a tech group backed by companies including Facebook parent Meta, Twitter and Amazon.

Platforms that don’t moderate content already exist. They’re havens for misinfo and violent insurrectionists who tried to overthrow our government. Creating an anti-content moderation platform for “democracy” would be like founding a coal company to stop global warming. @elonmusk pic.twitter.com/AP2mrEpW6x

So just like Congress lawfully imposed must-carry rules on cable in 1996—rules that triggered First Amendment scrutiny because they plainly limited cable’s exercise of editorial discretion concerning what speech to carry—Congress can take similar action today w/r/t to Big Tech .

‘An Arm and a Leg’: A Battle for the Proper to Assist