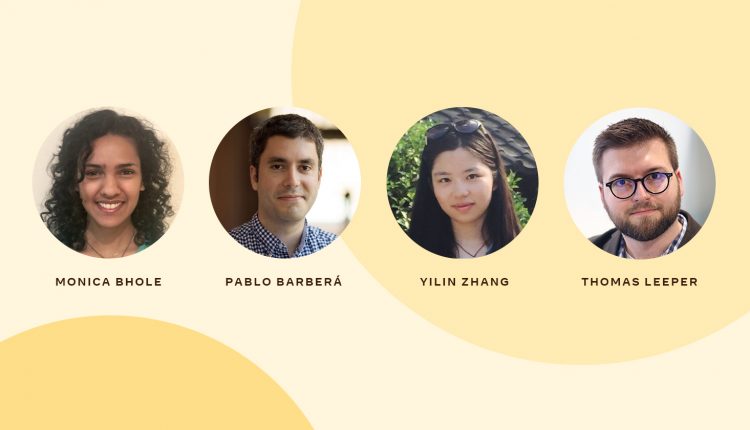 The Core Data Science (CDS) team at Facebook works with a variety of teams on an ever-changing range of projects and products to push the boundaries of data science. Because of the type of work that is done at Core Data Science, many of the team’s researchers come from a wide range of academic backgrounds, from the social sciences to other STEM fields. “It is a widespread misconception that you need a doctorate in computer science to do research on Facebook,” explains CDS Research Scientist Manager Aude Hofleitner. “But for teams like CDS, diverse perspectives enrich and expand our work.”

Hear from four researchers on the CDS team about their non-IT pathways to Facebook, what inspired them to make the transition from science to industry, and what they’re working on today.

Yilin Zhang received his PhD in Statistics with a minor in Computer Science from the University of Wisconsin-Madison. Her research interests include applied machine learning models, social network analysis, spectral clustering, community detection, and network-driven sampling. Yilin loves to be able to bring her personal interests in statistics to her work on Facebook. During her interview for the CDS team, she had the opportunity to present one of her doctoral projects in connection with her future work. And more recently, she is applying her knowledge of statistics to improve data distribution for the team responsible for removing inauthentic content on Facebook’s platforms. “The CDS team is unique because we don’t just focus on publications or work on a specific product,” says Yilin. “You can work with many different teams and work on a variety of products. There are so many opportunities to explore new fields of work and to expand on what you’ve learned. “

By supporting teams over the past two years, Yilin has also improved her communication and programming skills. “I came to Facebook with an understanding of R that I used while studying, but during my time here I got so much better at programming in Python,” she shares. “I remember preparing for my technical interview and anticipating how I would handle the programming questions. When I look back now, I can see how much I’ve learned. “

Outside of work, Yilin is a member of Facebook’s Women @ Resource Group and loves participating in the organization’s social activities to encourage greater representation of women in the industry. What advice to women who want to join the CDS team? Be open-minded and just apply. She says, “When I read some of the research and articles on Facebook, I thought I had not had the right experience. But after going through the interview process and talking to different people on the team, I realized that there was a place for me here. “

Expanding Data for Good Research with an economic background

While studying, Monica didn’t think about working in technology. “At first I was interested in science or politics,” she recalls. “It was only after talking to some PhD students that I found out that this was an option for me.” Monica knew R mostly from her doctoral thesis and Python from her previous job when she was hired. During Facebook’s onboarding boot camp, she was able to build on her existing programming skills and learn more about engineering at Facebook. “Bootcamp helped me get used to the Facebook systems. It was tech-heavy and I learned a lot. “

“Working on the CDS team is a rare opportunity to work with social scientists and at the same time to inform about product changes through engineering,” beamed Monica. “I love the flexibility to be able to research and work on the product. It keeps things exciting. “

Monica’s research is often guided by her economic background. One of her most exciting projects is her work on developing commuter zones, which are part of Facebook’s Data for Good program. “In economic research, we often do our analysis with commuter zones, which are incredibly valuable,” she explains. “But the challenge is that they are limited to US data. So if you want to look at data from other parts of the world, you’re stuck. This is the problem I wanted to solve and I realized that it could really advance research not only internally but also externally through the Data for Good program. I love to have the freedom to design my own research and roadmap and at the same time have a strong influence in the community. “

Pablo Barberá received his PhD in Political Science from New York University and is also an Associate Professor at the University of Southern California. Before joining Facebook, he was Assistant Professor of Computational Social Science at the London School of Economics and Political Science. His main research interests are computational social science, natural language processing, social networks and political behavior.

While at USC, Pablo’s research focused on understanding Facebook’s impact on the political process. Shortly thereafter, he was offered a full-time position. “Working on Facebook gives me the opportunity to work on all the things I enjoy doing academic research, but with more flexibility,” explains Pablo. “In academia, there is a lot of pressure to ‘publish or go under’ so I thought about work all the time, even on weekends. But in industry and especially at Facebook Core Data Science, this pressure is not so pronounced, so I feel comfortable leaving work at work. “

Today, Pablo spends most of his time programming and working in a more technical role – voluntarily. “While I had some programming experience before joining Facebook, going through Facebook’s mandatory six-week bootcamp program was an eye opener and it really helped me develop new skills.”

Even more, says Pablo, he appreciates being able to choose projects that interest him and being responsible for his work. “My team has the autonomy to do work that goes well beyond Facebook,” he explains. “We are currently working on the largest election study there has ever been, which I find extremely exciting. Most businesses are not driven by social science research, and there is a big gap between industrial research and science. We are closing this gap on Facebook. “

Achieve a meaningful impact with a political science background

Thomas Leeper holds a PhD in Political Science from Northwestern University. He was Associate Professor of Political Behavior at the London School of Economics and Political Science for three years before moving into industry. In 2018, he decided to join the CDS team at Facebook, where his research focuses on experiments, causal inference, and computational social science.

Thomas recalls the time he spent brushing up on the basics in preparation for his Facebook interview. “You can code in a language of your choice, but if you’ve never coded in front of someone or had to explain your thought process, it can be intimidating,” he says. “It’s a good idea to study some basic algorithms or take an introductory course before the technical interview.”

He continues, “Although more than half of our CDS team members are non-computer science graduates, we consider ourselves a team of engineers. You will see many articles published by the CDS team, but there is a lot more going on behind the scenes. Our day-to-day work means that we must all get excited about software development, and CDS provides the tools, resources and language for it. “

Thomas says that when he first came to CDS, he was surprised at how quickly he could make a difference – without a computer science background. “When I interviewed on Facebook, I recently published a piece of work that took me six or seven years to complete. In contrast, I’ve been on Facebook for almost three years and have completed multiple projects in a timeframe, scope, and scope that I could never have achieved before. Our industry is dynamic and we are constantly solving new challenges. The impact I could achieve in an academic environment could never be carried over to real differences as it is on Facebook. “

Would you like to learn more about the CDS team? Check out the research team’s page.

Is Style Too Obsessed With TikTok?