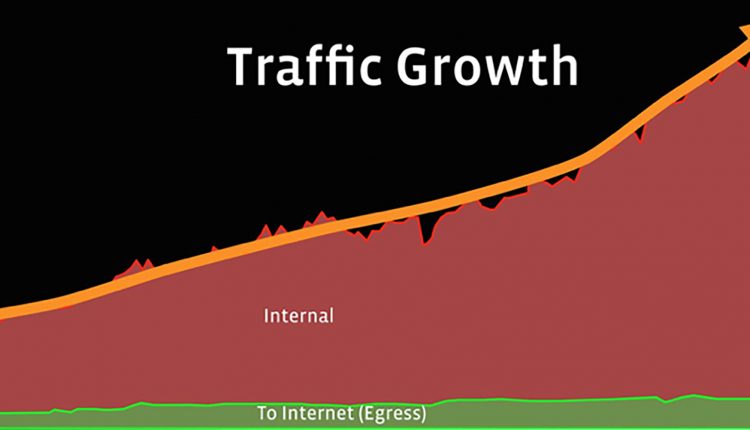 In order to meet the expectations of the service bandwidth, we need an accurate long-term demand forecast. However, due to the nature of our services, the fluidity of workloads, and the difficulty of predicting future service behavior, it is difficult to predict future traffic between each data center pair (i.e., the traffic matrix). To address this traffic uncertainty, we made changes to the design methodology that remove our reliance on predicting the future traffic matrix. We achieve this by designing the production network for an aggregate traffic to or from a data center called a network hose. By planning for net hoses, we reduce the forecast complexity by an order of magnitude.

The traditional approach to network planning

The traditional approach to network design is to dimension the topology to match a given traffic matrix under a set of potential faults that we define using a fault protection policy. In this approach: 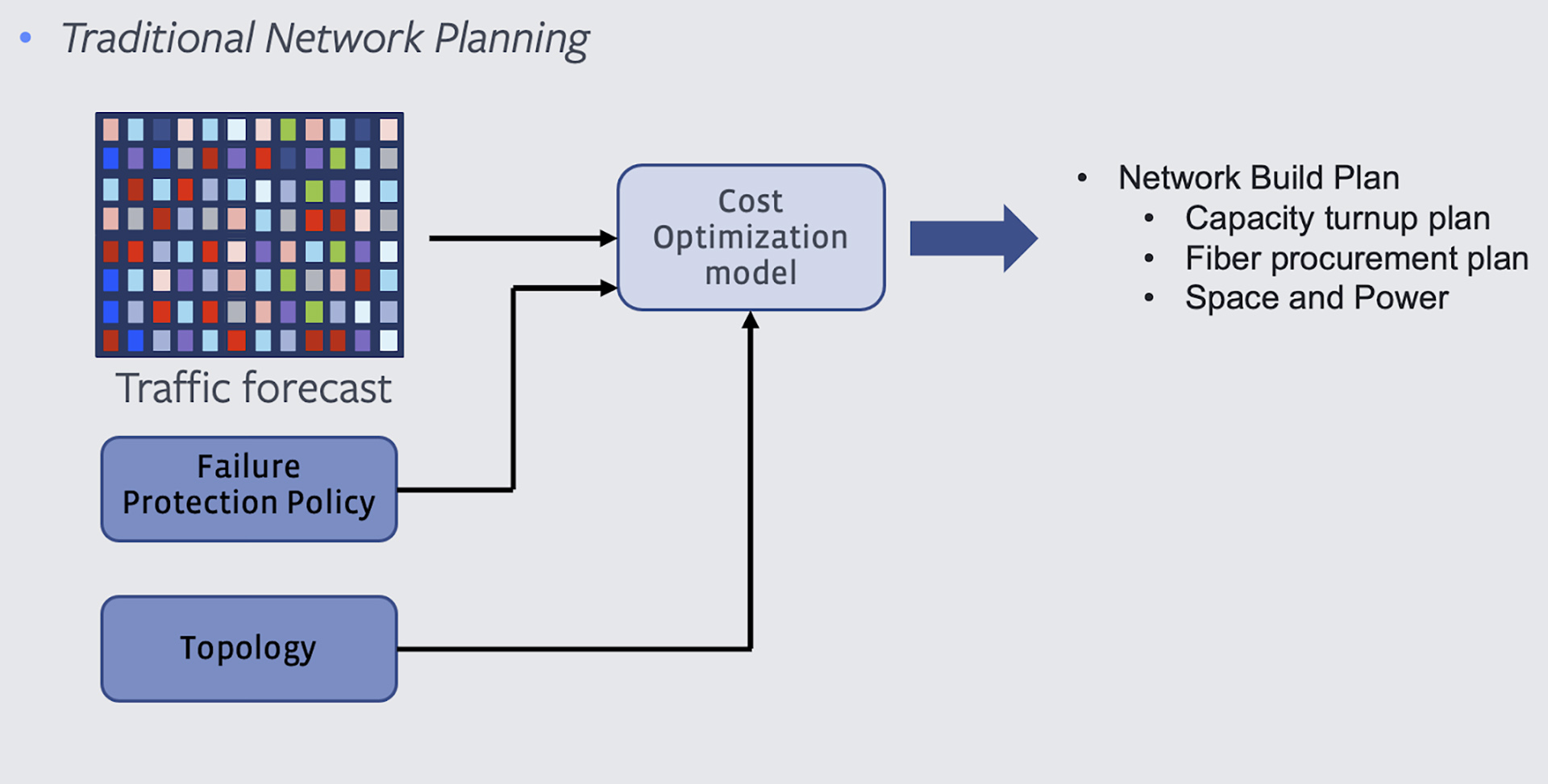 What is the problem?

The following reasons prompted us to rethink the classic approach:

Instead of forecasting the traffic for each (source, destination) pair, we do a traffic forecast for all outbound and all inbound traffic per data center i.e. Network hose. Instead of asking how much traffic a service would generate from X to Y, we ask how much inbound and outbound traffic a service is likely to generate from X. Therefore we replace the O (N ^ 2) data points per service with O (N). When planning for aggregated traffic, we naturally include statistical multiplexing in the forecast. 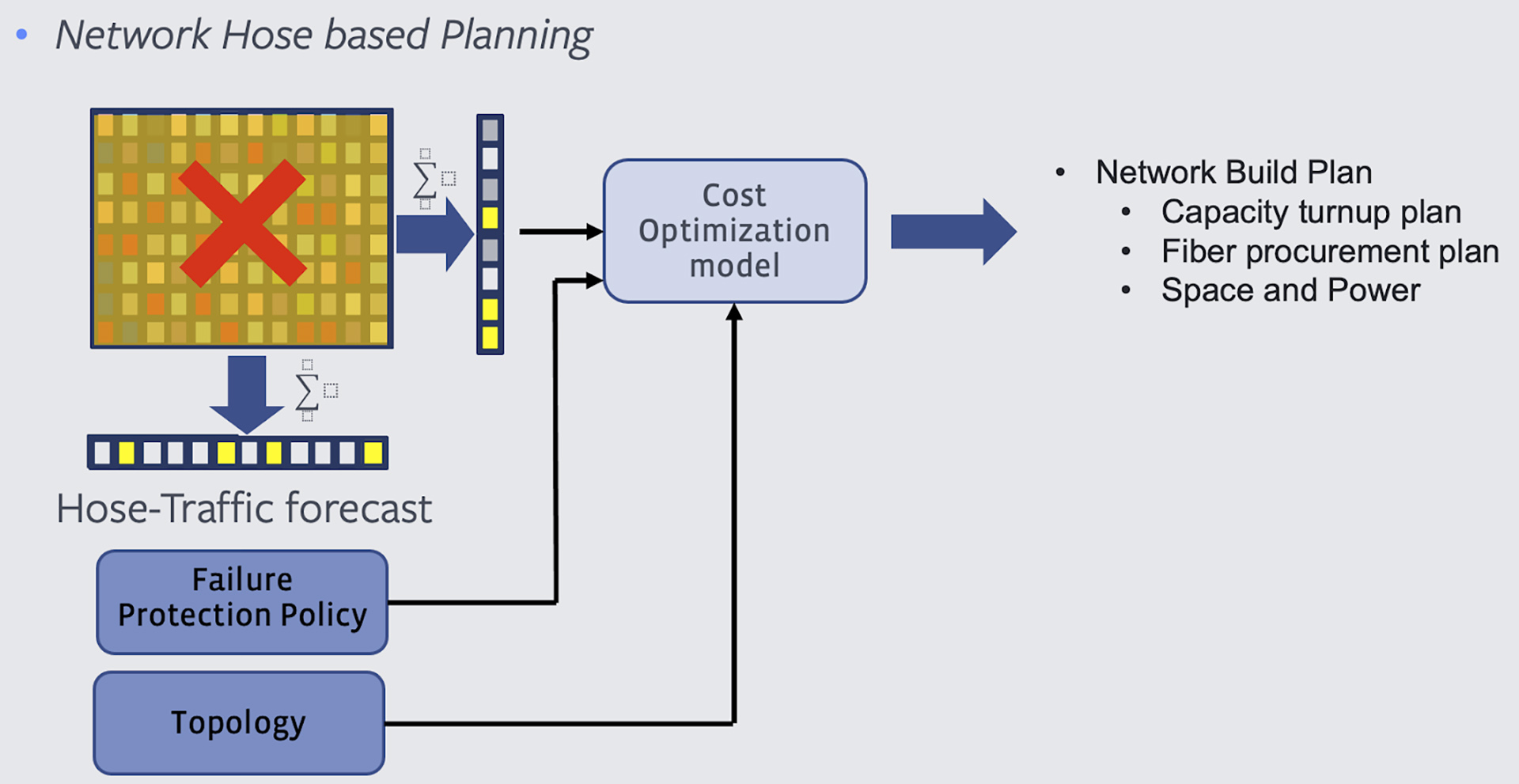 The above figure reflects the change in the input for the planning problem. Instead of a classic traffic matrix, we now only have a traffic hose forecast and generate a network plan that supports it in the event of all failures defined by the failure policy.

While The network tubing model concisely captures the end-to-end demand uncertainty, but it presents a different challenge: dealing with the many demand sets and realizing the tubing restrictions. In other words, if we take the convex polytope of all the demand sets that meet the tube condition, it has a continuous space to treat within the polytope. Usually this would be useful for an optimization problem, as we can use linear programming techniques to solve it effectively. However, the main difference in this model is that each point within the convex polytope is a single traffic matrix. The long term network plan must meet all of these sets of requirements if we are to meet the hose restriction. This represents an enormous computational challenge, since the design of a cross-shift global production network already represents an intensive optimization problem for a single set of requirements.

To identify these reference requirement sets, we use the cuts in the topology and location (latitude, longitude) of the data centers to gain insight into the maximum flow that a network interruption can traverse. The following example shows a network interface in a sample topology. This network intersection divides the topology into two sets of nodes (1,2,3,4) and (5,6,7,8). To dimension the link in this network section, we only need a traffic matrix that generates the maximum traffic over the graph section. All other traffic matrices with less or the same traffic over this intersection are then permitted over the graph intersection without additional bandwidth requirements.

Note that in a topology with N nodes we can create 2 ^ N network intersections and have one traffic matrix per intersection. However, the geographic nature of these cuts is essential given the planar nature of our topology. It turns out that simple cuts (typically a straight cut) are more critical to dimensioning the topology than more complicated cuts. As the following figure shows, a traffic matrix for each of the simple sections is more meaningful than a traffic matrix for the “complicated” sections: A complex section is already taken into account by a number of simple sections. 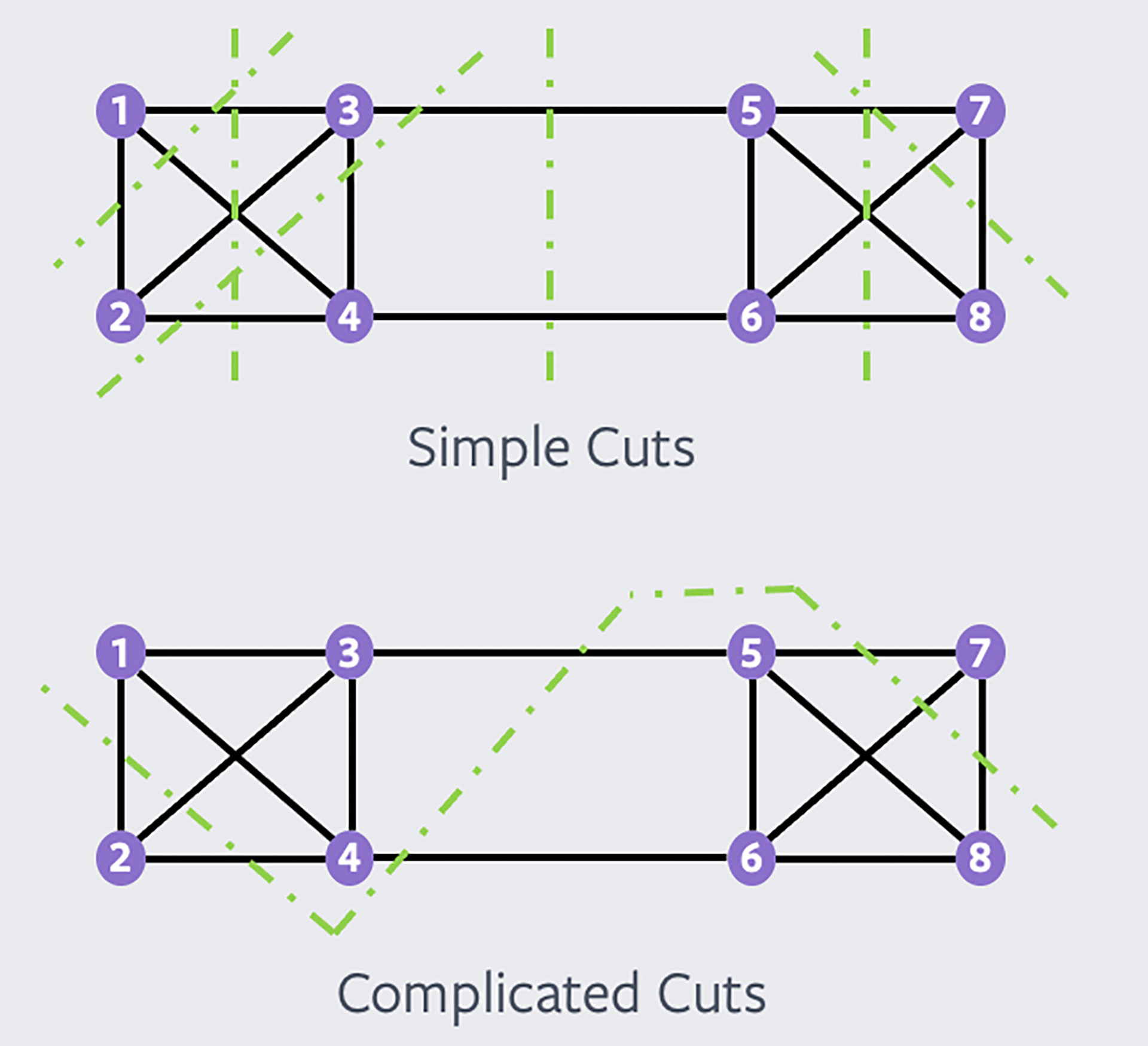 By concentrating on the simple cuts, we reduce the number of reference demand quantities to the smallest amount of the traffic matrix. We solve these traffic matrices with a cost optimization model and create a network plan that supports all possible traffic matrices. Based on simulations, we find that, due to the nature of our topology, the additional capacity required to maintain the tube-based traffic matrix is ​​not significant, but it greatly simplifies our planning and operations.

By adopting a hose-based network capacity planning methodology, we have reduced forecasting complexity by an order of magnitude, enabled services to analyze the network like any other consumable unit, and simplified operations by eliminating a significant number of alarms related to traffic increases because we are tracking You now see the increase in traffic in an aggregated form from one data center rather than between two data centers.