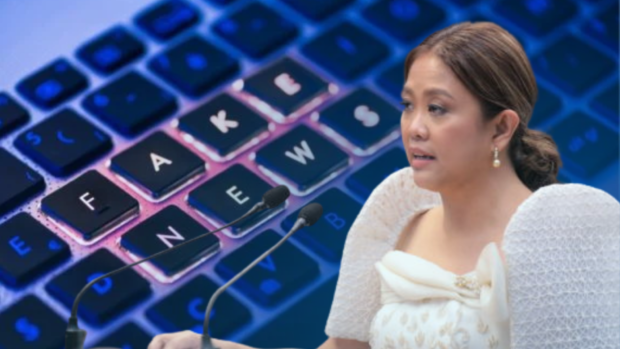 Combat faux information with out outlawing it – Nancy Binay

MANILA, Philippines — The government must lead the fight against fake news and close ranks with the media and the academe to restore the public’s trust in the creation and management of reliable information, Sen. Nancy Binay said on Wednesday.

Binay said, however, that she opposed any legislation that would outlaw fake news as this would curtail freedom of expression.

“The Constitution guarantees free speech, and it would be ironic if we regulate or restrict speech or other expressions only because we differ in opinion or view,” she said.

Binay said the government could launch a program or wage a campaign against this “uncontrolled virus” together with the academe and the private sector.

“This way, we know which and whom to trust, and somehow put some sense of credibility to the information or news that we receive,” she said.

Two bills against fake news have been filed in the Senate in the 19th Congress.

Senate Bill No. 547, or the proposed Anti-Fake News Act filed by Sen. Grace Poe, seeks to amend the Code of Conduct and Ethical Standards for Public Officials and Employees to further promote professionalism in information dissemination among public servants by ensuring that they do not become sources of misinformation.

SB 1296 filed by Sen. Jingoy Estrada seeks to criminalize the creation and dissemination of fake news by amending the Cybercrime Prevention Act of 2012. A similar measure, House Bill No. 2971, was filed at the House of Representatives.

Among the first to adopt fake news legislation was Malaysia, which passed a fake news law in April 2018. The law, which critics said was aimed at curbing dissent and free speech, was scrapped a year later.

In Singapore, the Protection from Online Falsehoods and Manipulation Act took effect in October 2019 but Human Rights Watch said the law and other regulations have been used by authorities to prosecute speech criticizing the government.

Undersecretary Cheloy Garafil, the officer in charge of the Office of the Press Secretary (OPS), on Wednesday said fake news was a “serious matter” that her office would be focusing on.

“So now, we have programs that will be laid down in the coming days,” Garafil said at a Palace briefing.

She did not disclose what these programs were.

Binay and Garafil were reacting separately to a Pulse Asia survey, conducted from Sept. 17 to 21, which found that nearly 90 percent of adult Filipinos believed that fake news was a problem in the country.

The survey said 58 percent of Filipinos see social media influencers, commonly referred to as bloggers or vloggers, as the main culprits in “spreading false information” on government and politics.

“In these times when every bit of information is unvetted and unverified, many people believe in gossip and false information,” Binay said.

Lies will continue to dominate in society if people will not speak up and point out the falsehoods, she said.

She said the media, academe, historians and even those in the private and public sectors were often victims of fake news.

“This is why we need people or even nongovernment watchdogs who can refute fake news publicly,” she said.

On Monday, Garafil told senators during a hearing on the proposed budget for her office that the accreditation of vloggers and bloggers to cover Malacañang, a plan under former Press Secretary Trixie Cruz-Angeles, had not been approved.

“We will continue to conduct a study and evaluate if they can be accredited to cover Malacañang,” said Garafil, a lawyer and former journalist.

During the presidential campaign, President Ferdinand Marcos Jr. claimed that he was a victim of fake news.

But the academe-led fact-checking initiative, Tsek.ph, found that he was the beneficiary of “positive but misleading” messages on social media, while his chief rival, former Vice President Leni Robredo, was the “biggest victim” of disinformation .

—WITH REPORTS FROM NESTOR CORRALES AND INQUIRER RESEARCH

Fake news persists because ‘people in power feed it’ – Colmenares

Don’t miss out on the latest news and information.