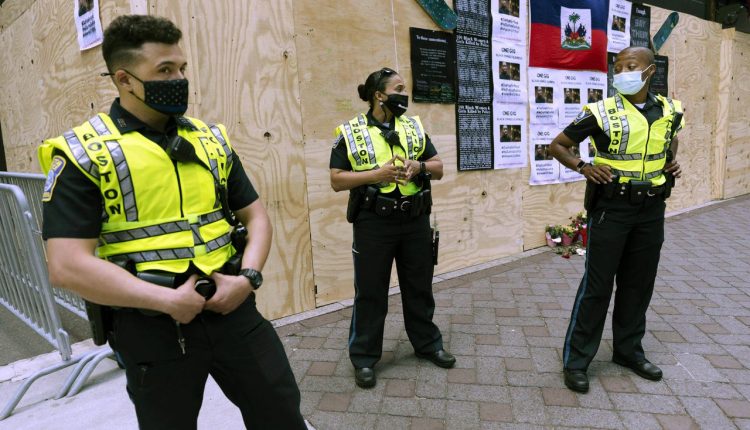 A Superior Court judge blocked the state’s police licensing commission from asking officers to disclose social media posts that “could be perceived as biased” and whether they were part of a group that “unlawfully discriminated” based on a list of factors, a move law enforcement groups heralded as a significant victory in the state’s nascent certification process.

Suffolk County Superior Court Judge Jackie Cowin issued the preliminary injunction Monday as part of a lawsuit filed by a handful of the state’s largest police unions against the Peace Officer Standards and Training Commission. The injunction throws a wrinkle into the state’s plan to recertify officers, where there have already been a number of contentious debates over a questionnaire officers must fill out.

Boston Police Superior Officers Federation Jeanne Carroll, one of the plaintiffs in the lawsuit, said the decision “signals that even police reform and the officials tasked with implementing it must adhere to the law.”

“Up to now, the commission has acted as if they were written a blank check with ultimate authority,” Carroll said in a statement. “Today they learned that check won’t clear. We are hopeful that the commission will move forward and be willing to work with all parties involved to improve public safety across the commonwealth.”

A spokesperson for the POST Commission said “we are reviewing the decision at this time.”

POST Commission Executive Director Enrique Zuniga said the commission “appreciates the well-crafted” decision upholding its authority to use the questionnaire as part of the recertification process for law enforcement personnel in Massachusetts. While two questions were set aside, Zuniga said the ruling “made clear” that differently phrased questions designed to achieve the same objectives “may well be upheld.”

“The POST Commission considers the questionnaire an essential element of the recertification process, as it is designed to determine an officer’s moral character and fitness for employment in law enforcement, and the court rejected the plaintiffs’ efforts to enjoin the use of a questionnaire by the commission,” Zuniga said in a statement.

Officers with last names starting with the letters A through H are currently undergoing recertification ahead of a July 1 deadline. The commission asked departments to turn in recertification documents by June 15, including a questionnaire officers must complete and sign as part of the process to determine their “good moral character” and fitness for duty.

The questionnaire and how the commission defines an officer’s fitness for duty and good moral character have been the subject of fierce debate between the licensing body and law enforcement groups.

Plaintiffs in the lawsuit originally asked Cowin to toss out four of the eight questions on the questionnaire, arguing they had no relationship to officers’ recertification and “violates officers’ due rights.”

“The POST Commission does not need responses to the four questions to make adequate determinations on officer moral character and fitness,” the plaintiffs wrote in a court document asking for a preliminary injunction.

In Monday’s decision, Judge Cowin said officers who received extensions to complete their questionnaire do not have to answer the two questions and the commission cannot use the answers — “indirectly or directly” — as a basis for denying recertifications for officers who have already submitted the form.

“Nothing in this decision is meant to prevent the commission from requiring officers (both those who have not yet answered and those who have had their answers stricken) to answer revised equations that meet constitutional requirements,” Cowin wrote in the decision.

A POST Commission spokesperson did not say whether the commission would rewrite the questions but the commission plans a Thursday meeting at 8:30 am where Zuniga plans to provide an update on officer recertification.

One of the questions Cowin threw out asked officers if they have ever “sent or displayed a public communication” on social media that “could be perceived as biased against anyone,” an inquiry lawyers for the plaintiffs said was vague, ambiguous, and overbroad.

Cowin said “some inquiry” into officers’ social media communications would “pass constitutional muster” but the question violates a tenet of the First Amendment that says a regulation targeting content-based speech must be written as to not unnecessarily target, “and therefore chill ,” protected speech.

“Since the question uses an indiscernible standard of what ‘could be perceived as biased by unknown third parties, innumerable communications are caught up in the sweep of the question which do not, by any reasonable measure, reflect on an officer’s ability to engage in biased -free policy work,” Cowin wrote, adding that the question is “impossible to answer” as it asks officers to determine what “unknown third parties” might perceive as biased.

Lawyers for the POST Commission argue the use of a written question-and-answers document is within the commission’s statutory authority and the law setting up the certification process requires a determination of good moral character and fitness for employment in law enforcement.

“It is consistent with that mandate for the commission to require officer candidates and applicants for certification or recertification to disclose information about certain crucial aspects of their past or present behavior,” court documents from lawyers representing the POST Commission read. “The legislative mandate also requires the commission to devote significant attention to ensuring that policing decisions do not flow from bias or discrimination.”

Cowin also tossed out a question asking officers if they have ever belonged to an organization that, at the time they were a part of it, “unlawfully discriminated (including by limiting membership) on the basis” of a number of factors.

Cowin said requiring people to disclose what organizations they are a part of can only be justified when there is “‘some substantial relation’ between a compelling government interest and the information required to be disclosed.”

“Here, there is not even a rational relation between the commission’s goal of ferreting out bias in policing and the information sought in question [seven]because the question requires disclosure of group membership that says nothing about whether an officer harbors bias,” Cowin wrote in the preliminary injunction.

The commission argued most other states that have instituted peace officer standards and training programs or commissions with periodic certification have a determination of good moral character and fitness.