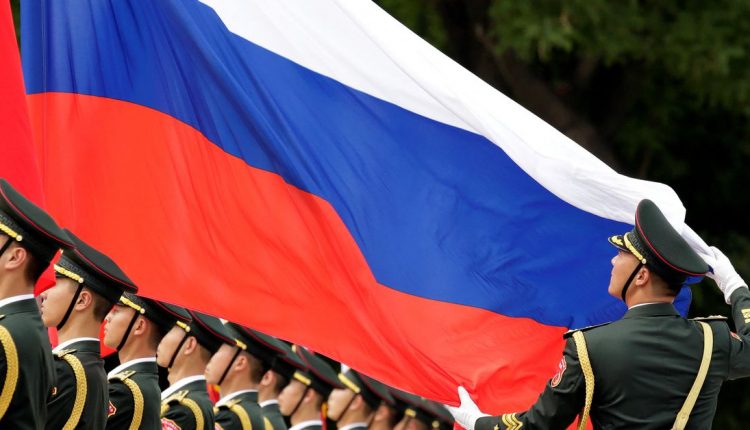 An honor guard holds a Russia flag during preparations for a welcome ceremony for Russian President Vladimir Putin outside the Great Hall of the People in Beijing, China June 8, 2018. REUTERS/Jason Lee

BEIJING, March 10 (Reuters) – China’s censors, who quietly determine what can be discussed on the country’s buzzing social media platforms, are silencing views of citizens protesting against Russia’s invasion of Ukraine.

In the days after Russia’s Feb. 24 attack, comments on Chinese social media platforms Weibo, WeChat and Douyin broadly backed Russia and President Vladimir Putin. Many posts challenging that, or even advocating peace, quickly disappeared from view.

Jin Xing, a former popular talk show host and China’s first openly transgender celebrity, told Reuters her account on Weibo – China’s equivalent to Twitter – was suspended last week, after she published two posts, including one that made reference to Putin as a “crazy Russian man” and urged her followers to pray for peace.

“All I said was I support life and oppose war, that was it. I did not say I support the US or Russia or Ukraine,” said Jin, whose account is followed by 13.6 million users. “What mistake did I make?”

Jin is not alone. Award-winning Chinese actor Ke Lan has been banned from posting on Weibo “due to violating relevant rules and regulations,” according to a notice on her Weibo account. She had liked and shared images and comments opposing the war, including pictures of an anti-war protest in St Petersburg.

China and Russia have forged an increasingly close partnership in recent years. Beijing has not condemned Russia’s attack on Ukraine and does not call it an invasion, but has urged a negotiated solution.

Some posts by prominent historians who tried to organize petitions against the war were removed from messaging service WeChat.

Lu Xiaoyu, an assistant professor of international relations at Peking University, wrote an article last week urging common sense. “Being seen as an ally of Russia will be a step towards losing global popular support,” he wrote in the article, which was widely reposted on WeChat. The original article can no longer be found.

Weibo (9898.HK) and Tencent Holdings (0700.HK), which owns WeChat, did not respond to requests for comment on why such material had been removed or accounts suspended.

China’s internet regulator, the Cyberspace Administration of China (CAC), which oversees the country’s news and social media firms, did not respond to a request for comment.

A spokesperson for China’s Ministry of Foreign Affairs said they were not aware of posts being removed or accounts suspended. “What I can tell you in terms of principle is, China’s stance on the Ukraine issue is open, transparent, and consistent,” the spokesperson said.

The censorship has extended beyond social media. Staff from at least two Chinese state media outlets have been told by their editors to tone down articles that deviate from Beijing’s official position on Russia and Ukraine, three people familiar with the matter told Reuters.

On Feb. 22, two days before Russia’s invasion, a Weibo account belonging to Horizon News, an affiliate of the state-run Beijing News paper posted what appeared to be internal guidelines for Ukraine-related content that said posts that are “unfavorable to Russia , pro-West” should not be published. The post was deleted shortly after. Beijing News did not respond to a request for comment.

Television has also been affected. International Paralympic Committee (IPC) President Andrew Parsons called for peace during his televised address at the opening of the Paralympic Winter Games in Beijing last week. That part of his speech was not translated for the domestic audience by Chinese state broadcaster CCTV. The IPC told Reuters it had asked CCTV about the matter but had not received a response. CCTV did not respond to a Reuters request for comment.

On the other side of the debate, some aggressively pro-war or anti-Ukrainian views have also been censored in China. In the days following Russia’s attack on Ukraine, some posts circulated making light of the situation, for example by offering to take in young Ukrainian women refugees.

Over the past two weeks Weibo, WeChat and Douyin – the Chinese version of TikTok – have warned users against such jokes or spreading misinformation.

WeChat made an appeal on Feb. 25 on its own platform for what it called “rational discussion” of the war, noting that “vulgar” jokes had caused a “huge negative influence online.”

Douyin, owned by ByteDance, has made several statements on its official WeChat account over the last two weeks, warning against jokes, misinformation, and other content that “makes light of other people’s pain.” It said it had removed 6,400 videos that violated its rules, cut more than 1,600 live feeds and deleted more than 12,000 comments. ByteDance did not respond to Reuters requests for comment.

Weibo said it has suspended accounts for encouraging war on the Weibo pages of some foreign embassies in China, as well as requiring geolocation of users commenting on the war to prevent people from falsely claiming they are in Ukraine.

On March 5 Weibo said it had suspended more than 1,000 accounts that published “vulgar jokes” and “content that is overly insulting and warmongering.”

KHN’s ‘What the Well being?’: Congress Cabinets Covid Funding for Now