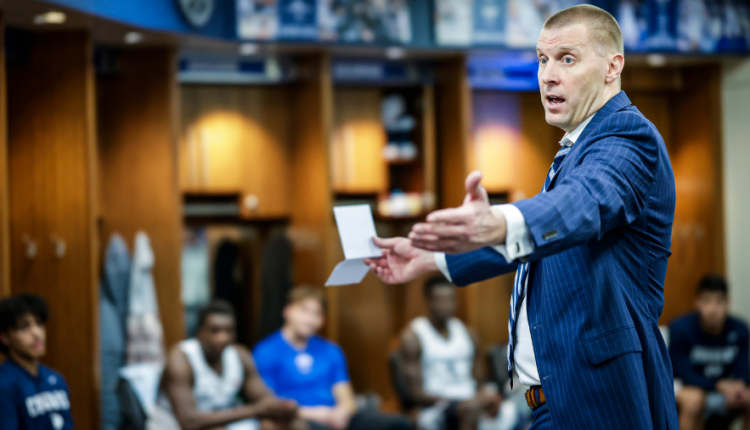 PROVO, Utah — The “pushing P” TikTok trend has made its way into the BYU basketball program.

You’re probably wondering what on earth “pushin P” is? Well, it’s time to catch up so you can start “pressing P”.

What is the TikTok trend “pushin 🅿️?”

Rapper Gunna released his new album DS4EVER earlier this month. One of the tracks on the album is called “pushin P,” featuring fellow rappers Future and Young Thug. In Gunna’s own words, Pushin P begins with Playa, but you could “take it forward in other ways,” according to the Georgia-based artist.

Since the song was released this month, it has surged in popularity on social media app TikTok. Everyone follows Gunna’s advice by pushing it in a different way. Even celebrities like Kim Kardashian have been “P-pushing” recently. So it’s only fitting that you can now add BYU basketball coach Mark Pope to the throbbing P crowd.

Mark Pope gets some laughs in the postgame presser

Following BYU’s 79-71 win over San Diego on Thursday, Mark Pope and star guard Alex Barcello took the podium to address the media. Pope, who became the first BYU coach to reach a mini-milestone and has 60 wins in fewer than 80 games, gave the floor to his all-American playmaker hopeful for the opening remarks.

After Barcello’s opening speech ended, Pope continued by saying, “I don’t have all those fancy words. All I know is we pressed P, man let’s go.

Barcello burst out laughing after the manager dropped that line in the third year. After the game, the senior leader took to Instagram and shared Pope’s pressing P-click on his IG stories with the caption, “Greatest Coach in America!!”

Striker Caleb Lohner tagged Gunna on his Instagram after seeing the clip.

If “pushing P” is about winning 80% of your games, I’m sure more BYU fans will get into pushing P. BYU started the season 16-4 and a 4-1 record in West Coast Conference play, giving them sole possession of second place in the league.

Next up for BYU is a Saturday night tilt against the Portland Pilots at the Marriott Center. The tip is at 7 p.m. on BYUtv and KSL NewsRadio.

Mitch Harper is a BYU Insider for KSLsports.com and host of the Cougar Tracks Podcast (SUBSCRIBE) and Cougar Sports Saturday (Saturday 12-3pm) on KSL Newsradio. Follow him on Twitter: @Mitch_Harper.