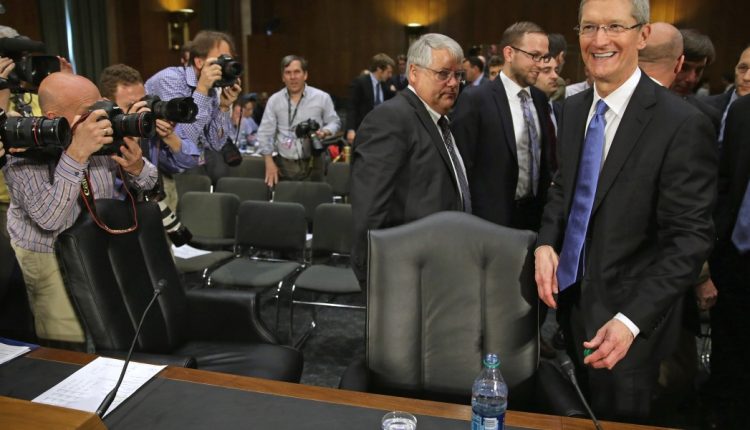 Oh, to be a fly on US Sen. Richard Blumenthal’s shoulder today.

The Connecticut Democrat and champion of legislation targeting app store monopolies must be fuming over Apple’s latest changes to its cash cow App Store—updates that put an even tighter squeeze on developers and stick a needle in the eye of tech reformers.

A new guideline stipulates that developers cannot use non-fungible tokens, cryptocurrencies, and other Web3 tools as “purchasing mechanisms” that circumvent Apple’s in-app sales feature. Apple takes a 15% to 30% cut of all in-app purchases made on its operating system, generating tens of billions of dollars annually at ridiculously high margins (Apple doesn’t report official in-app revenue totals). Gaming app developers, who produce most of Apple’s in-app revenue, have been particularly interested in using NFTs to unlock new features and levels within their titles.

A second guideline specifies that Apple is now entitled to its 15% to 30% cut on ads purchased within a social media app that will also display the ads. For example, Facebook and Instagram parent Meta must pay the Apple tax anytime business owners or influencers use those two apps to buy or “boost” ads that will be shown to users. The financial impact of this change is not immediately clear. Third-party apps that help companies manage their ad buying on social media platforms are not subject to the new regulation.

While perhaps not intentionally on Apple’s part, the new regulations shovel salt in the wounds of Blumenthal, whose bill aimed at democratizing app stores failed to cross the finish line ahead of Congress’s August recess.

While Apple and Google parent Alphabet argue that the current system serves consumers well and ensures a safe digital ecosystem, tech reformers believe the two companies are engaging in monopolistic behavior through their app store rules. With more options on iOS and Android, developers and consumers could gravitate to app stores that charge lower fees (and Apple and Google might reduce their cut to stay competitive).

The Open App Markets Act breezed through the Senate Judiciary Committee, earning bipartisan support in a 20-2 vote, but the bill never reached the Senate floor. Legislators and advocates have offered multiple reasons for the stalled momentum: an aggressive lobbying blitz by Big Tech; an inability to corral 60 votes for passage in the Senate; and a crush of other pressing legislation, among them.

The bill’s backers still hold out hope that legislators will revisit the act during the post-midterm election lame duck session—and Apple’s actions Monday could galvanize those efforts.

The timing of Apple’s aggressive moves—with legislation still simmering on Congress’s back burner—suggests the tech giant will only get more greedy with its app store ambitions. Epic Games CEO and Fortnite developer Tim Sweeney, whose company is suing Apple over its app store rules and fees, warned as much Tuesday.

“It’s quite shocking that, in the presence of antitrust lawsuits and greatly increased legislative and regulatory scrutiny, Apple’s doubling down on brazen monopoly rent seeking,” Sweeney tweeted Tuesday.

Sweeney might find it shocking, but until federal legislators take action, nobody should be surprised by Apple strengthening its grip on the app ecosystem.

Want to send thoughts or suggestions to Data Sheet? Drop me a line here.

Double trouble for China. federal authorities announced charges Monday against two suspected Chinese intelligence officers accused of interfering with a criminal investigation into giant telecommunications Huawei Technologiesthe Washington Post reported. FBI Directors Christopher Wray Said the two charged individuals offered bribes for information about a federal probe into Huawei to a person who, unknown to them, was working as a double agent for the US The Justice Department indicted Huawei in 2019 on charges related to violating US sanctions and conspiring to obstruct justice.

London calls for a slowdown. The UK’s financial regulator is starting Initial inquiry into consumer finance ventures launched in recent years by American tech giants, the Financial Times reported Monday. The probe will examine whether AppleGoogle, and Meta, among others, might use their power to push out smaller retail finance firms dedicated to payments and lending. The preliminary review does not include specific policy recommendations or regulatory changes.

Briefly killing the messenger. Whatsapp went down for about two hours in multiple countries early Tuesday, a rare outage for the popular messaging app, TechCrunch reported. the Meta-owned tool was offline from roughly 3 am to 5 am EST, though it was not immediately known how many users were affected. Meta officials confirmed that they had fixed the issue, but they did not elaborate on the cause of the problem.

Striking out again. The Amazon Labor Union has called off an election at a Southern California warehouse, dealing another blow to organizers hoping to unionize more employees of the tech behemoth, The Verge reported Monday. ALU officials did not elaborate on the reasons for withdrawing their union petition in records filed with federal regulators, and organizers have not commented on the latest move. The ALU won a surprise unionization victory at a Staten Island, NY, warehouse in the spring, but it has since lost two elections and struggled to gain momentum at other Amazon facilities.

Going long on crypto. Plenty of reporters have tried to write the official tome on crypto—but none of them are Bloomberg’s Matt Levine. The latest issue of Bloomberg Business Week features 40,000-plus words on all things crypto by the current champ of financial journalism, whose mix of savvy insights, wry prose, and easy-to-understand commentary makes him particularly well suited to explain the blockchain phenomenon. The dissertation traces the origins and intentions of crypto for blockchain noobs, while also framing crypto within larger themes of trust and community for its longtime acolytes.

I don’t have strong feelings either way about the value of crypto. I like finance. I think it’s interesting. And if you like finance—if you like understanding the structures that people build to organize economic reality—crypto is amazing. It’s a laboratory for financial intuitions. In the past 14 years, crypto has built a whole financial system from scratch. Crypto constantly reinvented or rediscovered things that finance had been doing for centuries. Sometimes it found new and better ways to do things.

All eyes on SEC, CFTC as crypto industry waits for regulationsby Leo Schwartz

For the first time ever, Apple has raised prices for its TV+ and music streaming. Here’s how much they’ll cost you nowby Mark Gurman and Bloomberg

Dirty shrimp farms are punching a huge hole in the environment. AI could cut it in halfby Matt Whittaker

But other than that, Mr Luckey? Another big name in tech joined the anti-metaverse pile-on Monday—and this time, it’s someone who had some skin in the game. Oculus founder Palmer Luckey, who sold his virtual reality company to Meta for $2 billion in 2014, offered a blunt, bearish assessment Monday of Mark Zuckerberg’s prized metaverse platform, Horizon Worlds. Speaking at the Wall Street Journal‘s Tech Live conference, Luckey said Horizon Worlds is “not good,” “not fun,” and “not a good product.” Oof. It wasn’t all doom and gloom for Zuckerberg, however. Luckey said the metaverse “could be amazing in the future,” and Meta is “in the best position of anyone to win in the long run.” Metaverse skeptics can now try Horizon Worlds on the company’s latest virtual reality headset, Meta Quest Pro, which went on sale Tuesday (price tag: a cool $1,500).

Alex Jones: A symptom of a wider misinformation pandemic

On-line harms and security within the metaverse