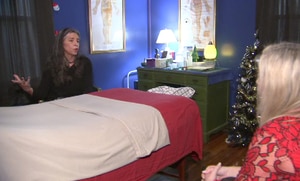 Acupuncturist speaks out towards push to control follow in Oklahoma

Oklahoma is one of two states that doesn’t require a license to practice acupuncture.

That could change with the next legislative session scheduled next year. However, some acupuncturists are fighting regulation.

FOX23 told you about the push to create the Oklahoma State Board of Acupuncture in October. We received multiple emails, some angry, from acupuncturists who are fighting it.

Jamie Wartenby has been practicing acupuncture in his east Tulsa home since 1995.

“I love that acupuncture is an art, and it’s never-ending learning,” said Wartenby.

She worked as a part-time massage therapist while in college before finding an acupuncture school in Tahlequah.

“The first year was total lecture, the second year I went into the clinic with the instructor, one on one, and treated his patients with him,” said Wartenby.

Wartenby is a member of the Oklahoma Acupuncture Association. It is a voluntary alliance of practitioners that was founded in 1997.

In almost 30 years of practice, Wartenby has seen the push for state regulation before, but says there’s a reason that lawmakers have not passed it.

“It’s gone up before. They look at it and see that we’re already self-regulating. So they’re like, what’s the problem here?”

Wartenby believes oversight would not protect patients or improve safety.

“If a patient is unhappy with an acupuncturist, there’s social media, there’s Google reviews, the word gets around,” said Wartenby. “Being part of the federal health care system in general, Oklahoma is self-regulating. It’s worked since 1987, and if it’s not broken, why fix it?”