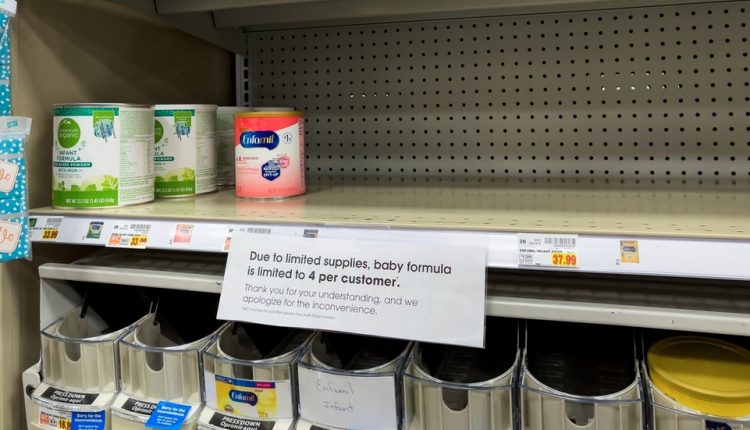 contributed photo Politicians who cry that they’re “pro-life” are voting against feeding babies. Others look away while monopolies undercut food safety.

My 8-month-old daughter, Jayde, was born with a growth restriction. She weighs just 13 pounds — no more than a 3-month-old. She sees a pediatric nutritionist and eats a specialized formula that provides 30 calories per ounce in hopes of getting her on the elusive growth curve.

Jayde was crawling steadily towards this goal — until all of a sudden, we couldn’t find her formula anywhere. We spent hours scouring the internet, social media, and stores. As the national shortage took hold, none could be found.

When I was on my last can of formula and crying in the empty aisles of the grocery store, I desperately posted online about Jayde’s needs. I’m fortunate that my network of friends, family, and colleagues were compassionate and responsive to my pleas.

A colleague in Dallas saw my post and began searching her area for Jayde’s formula. Twenty-eight miles away from her home and hundreds away from mine in Maryland, she found two cans of formula and sent them to me.

What a relief! But two cans will last us no more than two weeks. Then what?

I wanted answers to that question and to many others. Through a local chapter of Mocha Moms, an organization I belong to, I was invited to a White House summit on the baby formula crisis. I wanted to know why the Defense Production Act hadn’t been activated sooner.

I wanted to know why anti-trust regulations hadn’t prevented a virtual monopoly that puts nearly 90 percent of infant formula production in the hands of just four corporations.

I wanted to know why the formula maker Abbott Industries was allowed to prioritize stock buybacks over safety protocols so that their products became contaminated, causing the shortage.

I wanted to know how families like mine would keep their babies alive and healthy. The answers were few.

Fortunately, the Defense Production Act is now engaged, with the Biden administration directing firms to prioritize getting key ingredients to baby formula producers. Some formula is coming in from overseas. Congress has also expanded the Women Infant and Children’s program (WIC) to cover more formula brands.

But with the global supply chain still kinked up, these measures will only go so far. Unfortunately, some of our elected officials are standing in the way of help.

The House of Representatives just passed a bill to create a $28 million emergency fund to assist the FDA in increasing formula capacity. Stunningly, nearly 200 House Republicans voted against it — and Senate Republicans have signaled they may block it.

Voting against baby formula? This is an outrage. These lawmakers say they’re pro-life. To truly be pro-life, we must be concerned with feeding innocent children and helping struggling families.

My family has some privilege — we have full-time jobs, reliable child care, and a supportive network. In spite of all those advantages, we have just two weeks of food for our baby. My heart aches for families with far fewer resources.

This is part of a broader, systemic problem of our policymakers underinvesting in families. The proposed Build Back Better Act would have provided much more support for families with kids, but 50 Senate Republicans, plus Democrats Joe Manchin and Kyrsten Sinema, dumped that like it was spoiled milk.

This crisis — which has literally taken food from the mouth of my baby — has awakened a passion in me. It’s made me realize that we can’t be silent anymore. We must call out these lawmakers who won’t stand up for families — and tell them we’ll find new ones if they don’t.

a member of Mocha Moms, and a staunch advocate for the issues impacting families everywhere.

This op-ed was distributed by OtherWords.org.

Today’s breaking news and more in your inbox