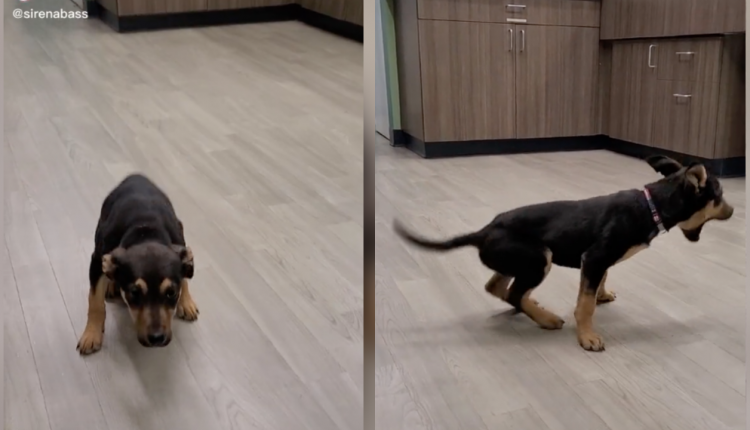 Video of disabled pet dancing on TikTok is just too cute

Internet users have recently passed out over an adorable video of a disabled puppy dancing. The TikTok has garnered millions of views over the past few months.

Puppy videos are a boon for all internet users. Many find solace by watching the antics of the adorable puppies from TikTok after a hectic day.

Every now and then, however, a video pops up on the internet that ends up being an absolute favorite of all internet users. The clip of the disabled puppy dancing on TikTok did just that.

Watch the video of a disabled puppy dancing

With over 91.6 million views on TikTok, the disabled puppy is now quite famous.

The viral clip was posted by a woman named Sirena who manages the TikTok account Bunnytherabbitdog. It is the first video that Sirena posted on the platform on January 15th.

We can see little pooch named Bunny jumping up and down in the vet’s office to DJ Moody’s song Happy.

At first it may seem like the puppy is just doing some unique dance moves, but if you keep watching you may find that he appears to have some sort of medical condition.

A report in Newsweek shows that the young pet has what is known as cerebellar hypoplasia, which makes motor movements difficult for animals.

However, another report on the Carolina Veterinary Specialists’ website at Rock Hill states that while there is no cure for this condition, “Your puppy can learn to compensate for their condition and live a long, happy, and pain-free life. “

One user named Stephanie Solis wrote, “It’s like his brain is saying ‘tail tail’, but his body is like ‘wagging everything’.”

Another fan on the platform, Nina Fan, stated, “I officially died of the cuteness.”

Given the popularity of Sirena’s first video, the dog mom has posted more videos of her puppy, Bunny. Their latest ones show how much the pup has grown over the past few months.

Other videos of the celebrity puppy

TikTok user Sirena posted another adorable video of her pup in June 2021 of the little pet dancing to Badanamu’s Hop Pop Stop. The puppy looks grown up and yet has retained its cheerful demeanor.

Another TikTok shows Bunny running adorable to her mom while Sirena calls her while playing in her garden.

In other news, why is Shaun Keaveny leaving 6 Music and what’s his new job?