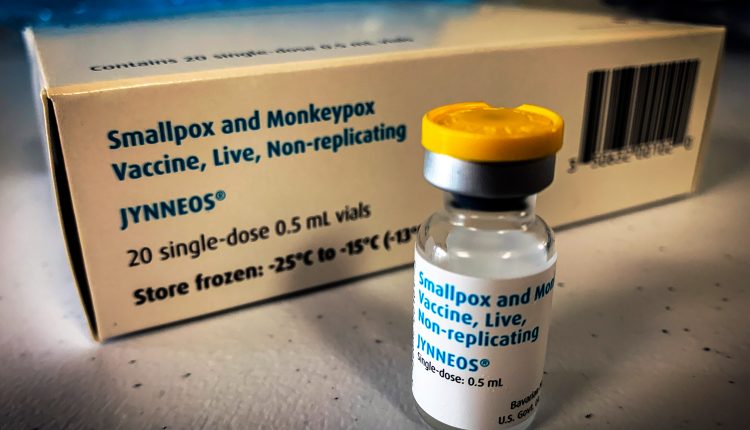 Andy Stone is one of the lucky ones. The New York City resident saw a tweet from a local AIDS activist saying that monkeypox vaccines would be available that day at a clinic in Manhattan. Stone, 35, and his husband booked appointments online right away and got their shots last month.

“I want to do what I can to protect myself and others,” said Stone, a marketing consultant living in Brooklyn, who said his primary care doctor advised him to get the vaccine as soon as possible.

Hundreds of men who showed up without appointments and waited in a snaking line around the Chelsea Sexual Health Clinic that day weren’t as fortunate. The 200 shots available went quickly, and many people were turned away, according to New York City Council member Erik Bottcher, whose district includes the neighborhood of Chelsea. When people tried to make online appointments for subsequent days, none were available, he said in a letter to state officials urgently requesting additional doses of the vaccine.

The first monkeypox case in the United States was confirmed in mid-May. As the number of monkeypox cases reached 605 nationwide as of July 6, some public health experts saw echoes of covid-19 in the government’s halting response.

“We’re six weeks in, and we’re still having problems with availability of testing and vaccine supply, all these issues that we saw with covid,” said Gregg Gonsalves, an associate professor of epidemiology at the Yale School of Public Health. “Now, the prospects for containment are receding quickly.”

Monkeypox is not covid. Covid has killed more than 1 million Americans, but no one has died from a monkeypox infection in the United States during the current outbreak. People can’t get monkeypox by simply walking into a room and breathing the same air as an infected person.

The monkeypox virus, which belongs to the same family as smallpox, typically causes painful, pimple-like sores on people’s face, hands, feet, chest, or genitals, along with fever and swollen lymph nodes. Until the lesions scab over and heal, people can infect others through close physical contact or by touching things like bedding that were in contact with the rash. People generally recover from monkeypox in two to four weeks.

Most infections identified so far have been in men who have sex with men, and many of the cases are in Europe. But the World Health Organization reported July 1 that cases are emerging among other groups — in some cases, among people such as household members, heterosexual contacts, and children. Up to 10% of patients have been hospitalized, according to the WHO.

Two vaccines are available to protect people against monkeypox, Jynneos and ACAM2000. Federal officials are focused on prioritizing providing Jynneos, given in two doses 28 days apart, because it has fewer side effects and can be administered to people who are immunocompromised, which ACAM2000 cannot. The federal government has distributed more than 800 doses of the ACAM2000 vaccine to date.

At the moment, however, vaccine distribution is barely a trickle, and health care providers on the front lines say they need more doses now.

In recent days, federal officials have announced a three-pronged response to the monkeypox outbreak that includes expanded deployment of vaccines, easier access to testing, and a campaign to educate the public and providers about the disease and promote vaccinations among people most at risk, particularly those in the LGBTQ+ community.

“While monkeypox poses minimal risk to most Americans, we are doing everything we can to offer vaccines to those at high-risk of contracting the virus,” Health and Human Services Secretary Xavier Becerra said in a statement. “This new strategy allows us to maximize the supply of currently available vaccines and reach those who are most vulnerable to the current outbreak.”

Initially, the federal Centers for Disease Control and Prevention recommended that people get vaccinated only if they were exposed to someone with monkeypox. The federal guidance has been expanded to a much larger group, including men who have sex with men who have recently had multiple sex partners in a place where monkeypox has been reported.

On July 1, the CDC said it had purchased additional doses of the Jynneos vaccine, made by Bavarian Nordic A/S, bringing to 4 million the total number of doses that will be available in 2022 and 2023. On July 6, the federal government said that it had distributed 41,520 “patient courses” of the vaccine to 42 jurisdictions.

New York City received an initial 1,000 doses that were made available at the Chelsea clinic, but then got nothing more for nearly two weeks. In Washington, D.C., 300 vaccine appointments that were made available at the end of June were reportedly taken in minutes. In Los Angeles, 800 vaccine doses had been distributed as of July 1 to people who are close contacts of people who have the disease. In a news release, Los Angeles County’s Department of Public Health said it would provide more doses to high-risk groups as the vaccine supply increases.

In early July, the New York City Department of Health and Mental Hygiene said it had been approved for nearly 6,000 additional doses of the vaccine, which it would make available at two city clinics. A software glitch halted efforts to make appointments, however. They are scheduled to resume next week. The city health department’s Twitter feed has chronicled its stop-and-go efforts to acquire vaccines and schedule appointments, along with residents’ exasperation.

“A sincere apology for the technical difficulties our vendor @medrite_ experienced with today’s monkeypox vaccine appointment rollout,” tweeted New York City Health Commissioner Ashwin Vasan. “We pledge to do better in the days and weeks ahead.”

The city has recorded 141 suspected cases of monkeypox, officials said.

The doses for New York will be a drop in the bucket, advocates said. At three clinics in New York City, the Callen-Lorde Community Health Center serves 20,000 primarily LGBTQ+ patients, many of whom are eager for the vaccine, center officials said.

“We’re promoting vaccines and working closely with patients to find access,” said Anthony Fortenberry, chief nursing officer at Callen-Lorde. “But right now, there’s a very small amount of vaccine available, and it’s much less than the demand is for it.” The health center has seen 15 patients with monkeypox so far, he said, up from four a week ago.

The U.S. Department of Health and Human Services didn’t respond to requests for information about vaccine and testing availability.

Epidemiologists said that speed bumps in testing for the disease are also hampering the nation’s ability to get in front of the monkeypox outbreak. Without widespread testing and contact tracing, the extent of the outbreak is not clear.

“Right now, we don’t have a sense if it is the tip of the iceberg,” said Jennifer Nuzzo, an epidemiologist at Brown University’s School of Public Health.

To date, monkeypox testing has been handled by a network of public health laboratories and requires a cumbersome process that many physicians are not familiar with, according to some critics. “If you’re an average clinician, you may have never sent a sample to a public health lab,” said Dr. James Lawler, executive director for international programs and innovation for the Global Center for Health Security at the University of Nebraska Medical Center.

Charles Rockhill said he has nightmares about getting monkeypox. “I’m pretty worried. I work in a gay bar,” the Manhattan resident said. “I’m around a lot of people all the time.” Rockhill is a bartender at Greenwich Village’s Stonewall Inn, the site of the Stonewall uprising in 1969, considered the birthplace of gay pride. He has been searching for monkeypox vaccination appointments. Unable to get a vaccine, he wears gloves at work and washes his hands more often on the job. In his personal life, he’s erring on the side of caution too.

“I’m just trying to make the best decisions for me and hoping that I don’t become infected,” he said.

KHN’s ‘What the Well being?’: Wrapping Up Summer season’s Well being Information

Native Well being Officers to Feds: The place’s the Remainder of Our Monkeypox…

Her Brother Landed in a Nursing House. She Was Sued Over His Invoice.

Haunted for 13 Years by Debt From Childbirth, Then Rescued by a Nonprofit