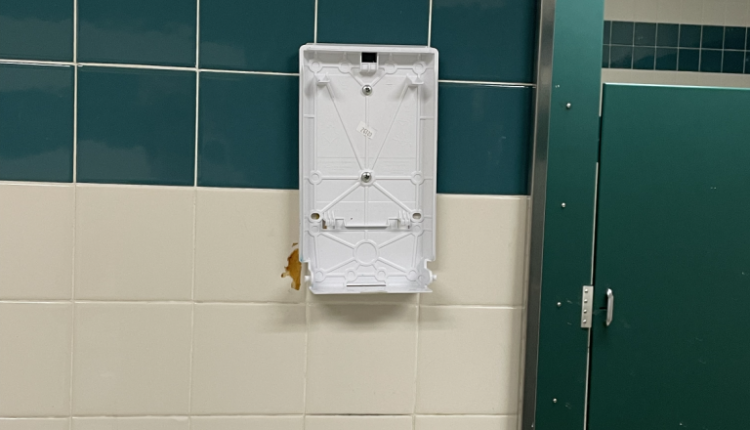 A paper towel dispenser stands empty after being vandalized by students in the latest internet challenge. / Photo courtesy of Wikimedia Commons

For the past year and a half, I’ve felt like the line between reality and fiction has disappeared. I keep reading what I think are satirical headlines only to realize that those words are being sent to a national news agency. This pandemic has shown that people will commit confusing acts, especially when social media is involved, such as the TikTok “Sneaky Leaks” challenge.

“Devilish licking” refers to the act of high school students stealing and / or destroying school property and showing off in front of others by showing off their “devious licking” online. Some of the most notable stolen items include sinks, soap dispensers, and even cases of stolen toilets.

Yes, during a school day’s limited downtime, students remove fully installed bathroom appliances filled with water due to a social media trend. That, too, is in no way satirical.

I’ve invested in the trend with the same “no, this can’t be” trend as other pandemic headlines. Then, through friends at my old high school, I found out that my alma mater had been hit by a couple of these leaks. These posts featured walls with missing soap dispensers, one picture shows a soap dispenser in a toilet.

Hearing the phone recording of my old headmaster saying the words “devil licks” over a loudspeaker announcement and demanding that the licks stop was perhaps the high point of the trend so far.

I, of course, in no way condone these leaks: vandalism at this level is expensive for schools, and equipment replacement requires additional maintenance. Plus, the overworked and underrated guards have to clean up the mess after the licking.

Is there a chance a handful of Tik Toks that pull school property out of backpacks are counterfeit? Sure, but there are too many well-documented licks to simply ignore the trend. For those who lick, punishment has since reached a level higher than explosion and suspension: In Bartow, Florida, according to The Guardian, a 15-year-old was arrested for destroying his school’s soap dispenser.

Students who have not done anything will also be punished. Even at my old high school, toilet trips are allowed to take a maximum of 5 minutes, although the phones have to stay in the classroom. Many other schools also ban leaked toilets, which results in toilets being limited only in certain parts of the building.

“Be careful what you post on social media” seems to be a dying sentiment for both children and adults. Don’t people understand how hard it is to deny a crime when you post video evidence of it on their public accounts? Is the inevitable punishment really worth a few laughs and clicks?

It’s terrifying to see how social media motivates students to commit theft, let alone theft, which is as difficult as uninstalling a urinal and dragging it home.

It’s been a major pandemic for everyone, and I’m just glad that I can be on campus in every way. There’s no need to add any rules beyond the COVID-19 provisions. Hopefully this trend will end soon before my old headmistress has to announce that she wants to return her car to the parking lot.

A dialog about decreasing the harms of social media