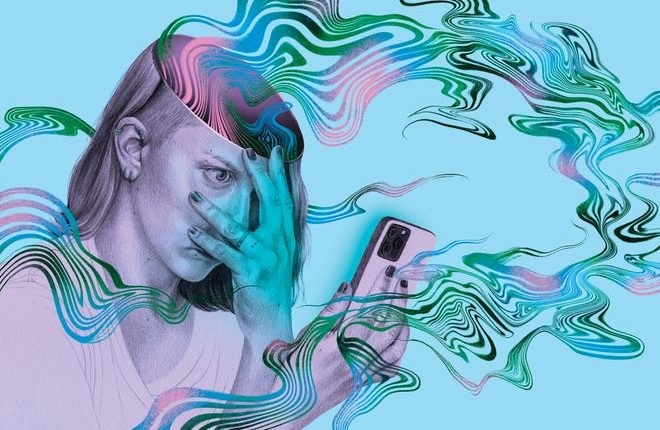 I was 3 years old when my mother first took me for a mental health exam. She wasn’t sure what to think of my constant, seemingly unconscious finger tapping – thumb to index finger, thumb to middle finger, thumb to ring finger, thumb to little finger and back in reverse order, over and over again, both hands dancing a silent ballet by my side while I watched TV or told a story.

“Is it OCD?” She asked my pediatrician.

No, he replied confidently. Probably just a nervous habit she’s growing out of. It was the early 1990s; mental illness was something that adults struggled with, not children. Certainly not toddlers.

At least that’s what we thought.

The news was both expected and earth-shattering. What I previously thought were peculiarities of my personality – perfectionism, impulsiveness, emotional outbursts, a constantly messy desk, a room or a car, things constantly being misplaced and running into furniture or doors, a tendency to talk in the middle of thoughts or out of nowhere Turning, fidgeting, procrastinating, forgetting common words in the middle of a sentence – all of these, she said, are manifestations of untreated ADHD.

As she read the screening questions, I burst into hysterical laughter, tears and all. I realized that this is how I am. I always have been. And that’s probably why my mental health has always been poor. It was horrific and it was comforting.

But it wasn’t the therapist who first claimed I might have ADHD. I owe this discovery to TikTok.

Like many others, the boredom of the pandemic drove me to download the app last year. It’s popular in part because of its awesome algorithm that is able to predict what type of content a user will like and then deliver it in 15-180 second clips. Within a few weeks, it had figured out my humor, political leanings, pandemic hobbies, and even my sexuality.

Then the app started sending me surprisingly insightful videos with silly titles like “ADHD Things I Didn’t Know Were ADHD Things, Part 3” and “Part 5 of Something That Knocked Me Out When I Found Out that it was an ADHD thing on TikTok ”. “At first I copied the videos. But the more often they appeared on my “For You” page, the more I saw myself in them. It described things I did, couldn’t do, or struggled with. It wasn’t long before I wondered if, like the creators of the videos, I have ADHD.

At its core, ADHD – Attention Deficit Hyperactivity Disorder – is an impairment of executive functions, which include analysis, planning, organization, time management, focus, emotional regulation, and more. Executive dysfunction due to ADHD can manifest as messy spaces, chronic lateness, procrastination, and moody outbursts. To me it feels like an invisible concrete wall on my way. On the other hand, I see the task that I want to do, such as washing the dishes, but it is as inaccessible to me as in a bunker.

All my life I have experienced symptoms of ADHD that often exist outside of the stereotypical portrayal of “little boy who cannot sit still”. In women, hyperactivity is often mental, not physical. Instead of bodies racing through a classroom, we have thoughts racing through our minds.

I only recently noticed that some people experience silence in their minds – that the constant, low hum of words flowing through my brain is atypical. The words themselves vary; sometimes I tell actions around me or create a story or a poem in my mind. Often there are excerpts from songs that are played in a continuous loop. When I fall asleep, it’s a waterfall of mental gibberish, a word salad that swirls around in my brain.

And that’s just an internal example. I could list a million other external characteristics that should have indicated earlier health care providers that I am neurodivergent – that my brain does not work like everyone else’s neurotypical brain.

I now know that I was a “twice extraordinary” child – a term that popped up in the 1990s to describe gifted students who also have a learning or physical disability, a language or behavior disorder, or a neurodiversity like ADHD or Autism. The two most common words teachers used to describe me were “bright” and “talkative”. I was prone to hyper-fixation, devouring book after book in a flash, and burned through hobbies, letting myself be consumed by each new one before I got bored. But my academic success kept me under the radar as other students received ratings for their more obvious differences.

As an adult, I spoke to psychologists about these traits and complained about my impulsiveness and lack of self-control. I worried that I might be addicted to shopping. I’ve complained about how I start projects at the last minute and go crazy when I perfect them, and how easily I get overwhelmed and shut down. I’ve often talked about the fact that I’m never just happy or sad, but rather elated or devastated. And I ventured the pressure to keep performing in professional environments. I’m very good at masking – making my struggles invisible so that I appear highly functional to those around me – and it’s exhausting.

Today the signs seem so obvious that I can’t help but be frustrated with a system that has let me down for decades. Some of my previous diagnoses – depression, anxiety, PTSD – weren’t wrong, but they weren’t complete. Part of this is that ADHD can coexist, or even cause, other mental health problems.

The American psychiatric system has let people – especially women – down for much longer than my life. (Google “female hysteria” for just one poignant example.) It is only recently that the different ways women experience ADHD have been recognized. Young girls with ADHD symptoms are often simply dismissed as “chatty” or “daydreamer”, and adult women with ADHD are often misdiagnosed as having anxiety or depression – assessments with which I am all too familiar.

I’ve spent the last 20 years both masking my mental health problems and trying to learn about them. I’ve been diagnosed – and misdiagnosed – by pediatricians, therapists, psychiatrists, and general practitioners. I’ve tried different therapies and drugs. And every time the “solution” I found had a fatal flaw: either it didn’t work, or it worked but had unbearable side effects, or it worked for a while and then stopped.

After I had an official ADHD diagnosis, I started working with my psychiatrist to come up with a new treatment plan. I knew I wanted to avoid the stimulant drugs that most ADHD patients are prescribed because they are amphetamine based and risk abuse. Since I was an addict in the family, I didn’t take the risk.

On a chemical level, ADHD is related to the neurotransmitters norepinephrine and dopamine, although serotonin can also be a factor. That could be why the medications I’ve used in the past seemed to be helping. They were selective serotonin reuptake inhibitors, or SSRIs, that help serotonin stay in the brain longer so it can do its job better. But these drugs never completely solved my problems because they didn’t address my norepinephrine imbalance.

We have chosen a selective norepinephrine reuptake inhibitor that increases norepinephrine and not serotonin levels in the brain. And I’ve found a new therapist who specializes in neurodiversity; together we’ll navigate what it means to be an adult woman with ADHD.

As of this writing, I’ve been on my new medication for about four weeks and I’m noticing a difference. I no longer feel paralyzed by simple but unexpected tasks. The weekend I wrote this essay, I noticed crumbs in the bottom of my cutlery drawer. Before that, I would have ignored them until my next hyper focus-induced cleaning dream, but instead I walked right through that invisible concrete wall, grabbed a paper towel, and wiped the drawer clean. Then, instead of spending the next few hours scrubbing the nooks and crannies of the kitchen, I just continued cleaning out the dishwasher.

This victory may sound trivial to a neurotypical person, but it was enlightening to me. This is what the content creators talk about in their TikToks “how ADHD drugs have changed me”. It meant my medication was working. It was the first time in years, maybe in my entire life, that I had concrete evidence of improvement.

The pandemic has derailed me in a way that I still haven’t fully recovered from. But it also presented a painful opportunity. Armed with a diagnosis I hadn’t waited for, I began to learn how a neurodivergent brain – my brain – works.

Let me be clear: this is not a silver lining. There is no neatly tied bow at the end. I am still very much into all of this and there is no guarantee that I will ever get out again.

Rather, this story is about how hard it can be to identify and understand neurodiversity, and how an online community has helped me – and probably many others like me. TikTok’s algorithm did something that half a lifetime of mental health care couldn’t: it recognized something in me, and its content creators showed me that my experiences are being shared and that maybe the cause of my struggles was something I still remember had not thought.

My new therapist says diagnosis is the tool we use to understand the brain process. It helps us describe the problem and from there we can find other ways to deal with it.

Diagnosis is not a solution. But at least it can be a card.

This story is from the August 2021 issue of Columbus Monthly.

Election ban on social media: what can, what cannot and the way is it regulated in different components of the world