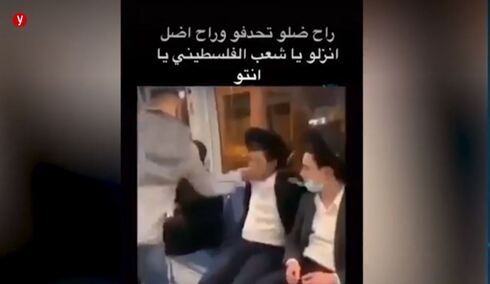 (April 25, 2021 /. JNS) In the past few weeks there have been an alarming number of violent attacks on visibly religious Israelis. Although these seemingly random incidents are not original, they turn their perpetrators into social media stars as they appear to be reacting in response to the recent insane Tik Tok challenge of asking Palestinian youths to violently beat up and beat an Orthodox Jew to publish a video of the attack on the Platform.

Sounds painfully familiar? Maybe that’s because we’ve seen this movie before. In 2015, it was the “knockout game,” another harmful social media trend that encouraged teenagers to film clandestine attacks on Jews in New York City. According to the Anti-Defamation League, the neighborhoods with the highest concentration of Orthodox Jews have had about 19 such “random” attacks on religious Jews: Borough Park, Crown Heights and Williamsburg.

On December 23, 2015, Rabbi Reuven Biermacher was stabbed to death several times by Palestinian attackers on his way home from his students at the Aish HaTorah Yeshiva in the heart of the old city of Jerusalem. He died of his wounds after being evacuated to Hadassah Medical Center.

This was not a political act, a protest, or a demonstration. It was a heinous and cruel hate crime committed because Rabbi Biermacher was a Jew.

Earlier this week, Rabbi Eliyahu Mali, head of Shirat Moshe Hesder Yeshiva in Jaffa, was attacked by Arabs when he asked about buying an apartment. Photos of the beating were blatantly shared on social media.

Just two days later, two Palestinian youths were arrested for beating an Orthodox man on Jerusalem’s light rail – a very public place – and sharing the video on TikTok. This was definitely not an isolated incident. Ori Nir of Americans for Peace Now publicly called on Palestinian leaders to condemn the “TikTok challenge among Palestinians” in Israel, “violently attack and provoke Orthodox Jews and upload the footage to TikTok”.

The irony is that for the past few months I’ve been talking about the tremendous potential social media has for spreading Jewish wisdom. But like any man-made innovation, its incredible power can be used to miraculously change the world or instill hatred in limitless others. While the danger is always there, the answer is not to shut down TikTok or enact regulations to prevent such content from seeing the light of day.

We need to recognize the phenomenon for what it is – not an evil emerging from any social media or other platform, nor any kind of political protest – but anti-Semitism, plain and simple, that is shared and enjoyed around the world becomes. In the past six months in particular, there have been numerous reports of the worrying and uncontrolled spread of anti-Semitism at TikTok, ranging from hate speech to downright intimidation.

In a September 2020 report by NBC News, at least half a dozen Jewish teenagers talked about being “bombarded” by anti-Semitism almost every time they post on TikTok, “regardless of whether the content is their Judaism acts or not “.

More recently, in certain clubhouse rooms, the latest social media platform to become infected with anti-Semitism, there have been dozens, if not hundreds, of posts expressing concern and utter fear of conversation – and the silence of the supportive Jews were.

How do we fight such an evil? With the power of knowledge. We need to find out about any new outlets where anti-Semitism has become culturally acceptable, especially on social media platforms. We know the solution won’t come from the social media giants, regardless of regulations or a false sense of what is or isn’t against their community standards. None of this will erase the hatred. There will always be another, simpler way or platform on which anti-Semitism can be broadcast.

We need to understand and recognize that these violent attacks against Jews – whether in Brooklyn, Jaffa or Jerusalem – are not protests against Israeli government policies. This is not an old message, it is ongoing. These are acts of anti-Semitism that arose out of pure hatred and a lack of respect for the other.

Just as most of the media largely ignored the ongoing attacks on Orthodox Jews in Brooklyn, the attacks in Israel saw little slip in the US press – unfortunately not even in American Jewish news agencies, let alone mainstream news.

What we need is outrage; We need a louder collective voice and a bigger outcry. But above all we need knowledge.

I was recently reminded of a speech given by Steven Spielberg at an Aish event in 2014. He said, “Ignorance is no longer an excuse.” He was referring to the digital technology revolution (which he then referred to as “satellite”) and that with so much information available, we had no excuse to let things slip by without absorbing it and learning enough to rid the world of that kind of hatred.

We must know without a doubt that it is not about “other Jews” – and never is about it. It affects and can harm each and every one of us. Unfortunately, Jews have learned the hard way in the past what happens if we don’t unite as a people against anti-Semitism. In these recent “TikTok attacks” the victims were identifiable Orthodox, but now, as always, Jews of all kinds, nationalities and origins must stand up and unite against hatred and violence. We just have to put our differences aside and come together.

To reiterate Spielberg’s observation, ignorance is no longer an excuse. As Jews, we need to quickly and intensively deepen our knowledge of incidents that happen on social media every day. express fervent moral outrage towards the right people when it happens; and get enough understanding of what it means to be Jewish to know what we are against and why.

Rabbi Steven Burg is the CEO of Aish Global.

Catholic monks within the Philippines flip TikTok into digital pulpit