Pavlides is very skilled in both baking and social media. She worked in the food industry and developed recipes.

Shereen Pavlides, a social media chef and influencer, hosted a live demonstration for students via Zoom on February 10 at 7 p.m. to celebrate Valentine’s Day.

Pavlides is popularly known for her TikTok video series called “Cooking with Shereen,” which has earned over 3.2 million followers on the app. Through her bespoke recipes, she teaches her audience that cooking from scratch is a lot easier than it seems. She has gained followers worldwide through her social media presence.

Thanks to the Student Entertainment Council (SEC), the students were able to take part in a cupcake baking demonstration with Pavlides from a distance entitled “Love to Bake”. The recipe made between 12-16 cupcakes. Pavlides’ recipe also included red food coloring to celebrate Valentine’s Day.

Prior to social media, Pavlides spent 15 years in the grocery industry as a recipe developer for national food magazines and Fortune 500 food companies. Pavlides also appeared on the Home Shopping Network and QVC to demonstrate cooking appliances live – which led them to promote their content on social media.

“Following ongoing requests from viewers for recipes that I demonstrated on the air, ‘Cooking with Shereen’ came to life in 2019 on YouTube and TikTok,” said Pavlides on her website.

Elena Lobo, Freshman Major in Criminal Justice, expressed how events like “Love to Bake” are wonderful ways to stay connected and be safe through the coronavirus pandemic.

“My experience with Riders ‘Love to Bake’ event was amazing. I had a lot of fun even though I was a little messy and my cupcakes had nothing to do with the chef’s, ”said Lobo. “Chef Shereen was absolutely amazing and so sweet, as were the other hosts at the event.” 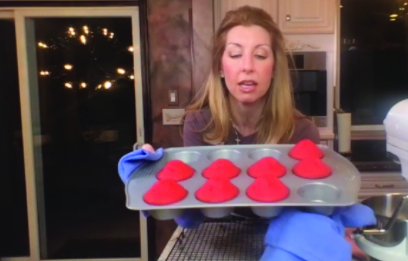 Shereen Pavlides is best known for her TikTok series “Cooking with Shereen”. She has over 3.2 million followers in the app.

The event enabled students to interact directly with Pavlides and gain confidence in their baking skills. Pavlides provided guidance throughout the event as students could ask their questions face to face.

She gave tips on telling students to put the cupcake trays in the oven side by side rather than on top of each other so that the batter cooks evenly. Pavlides were baked from their kitchen like the students. While her kitchen had several professional conveniences like two ovens and an electric mixer, she assured students that her personal kitchens were more than capable of making delicious cupcakes.

“It is best to place the cupcakes trays in separate ovens for the best results. Of course, not everyone has two stoves like me, but we can make everything you have at home work, ”said Pavlides during the event.

“The most memorable part is that she looks at some of the cakes I’ve decorated over the years and gives me advice on growing them,” Horton said.

The SEC encourages students to sign up for these virtual events so they can stay involved.