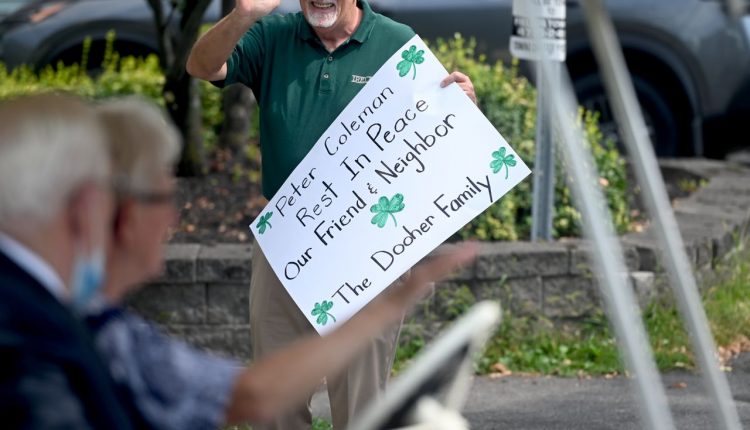 Subscribe to the Good Morning, CNY newsletter (served by Kinney Drugs) in your email inbox on weekday mornings.

picture of the Day

GOOD BYE OF PETER COLEMAN: On a hot and muggy Monday morning, people lined the streets of Tipp Hill, wearing green, waving Irish flags, tipping their hats and telling stories. They paid their respects to the late Peter Coleman, the larger-than-life bartender whose pride and purpose was not only Coleman’s Authentic Irish Pub and his family, but also the Tipperary Hill neighborhood they called home. Coleman died last week at the age of 84 after a brief illness. On Monday, after his funeral mass, his hearse made his way from St. Patrick’s Church on North Lowell Street, past the pub, and then on to the upside-down lights and the Stone Throwers memorial that he saw on the corner of Milton built Tompkins Roads. (Photo by Katrina Tulloch)

The next TikTok? Company wants to buy troubled CNY film center: A young company that wants to become the next TikTok has offered to pay around $ 8.5 million to buy the New York State-built and equipped DeWitt film studio for one price from $ 16 million to buy. The company is run by a native Mohawk Valley entrepreneur and entrepreneur whose previous high profile entertainment company crashed.

Jury found 20-year-old guilty of murder: A jury from Onondaga County on Monday found a 20-year-old man guilty of murdering a shop clerk on the South Side in an attempted robbery in December 2019. He faces life imprisonment without parole if convicted next month.

Covid-19 hospital stays in CNY on the rise again: Hospitals in Syracuse treated an average of 67 Covid-19 patients per day in the past week, more than four times the average number in the last week of July.

Baker’s Chicken Coop says goodbye to the fair: After more than 70 years as a grocery seller at the New York State Fair, Baker’s Chicken Coop ended this year. But Reenie Baker-Sandsted felt she had to come back for one last look. “I couldn’t just walk away,” she said. “Not with all the good wishes we got from everyone.”

SU publishes depth chart: And the starting QB is …: Syracuse football released its first depth map of the 2021 season on Monday and appears to be the answer to a long-awaited question: who will be Orange’s starting quarterback? the start against Ohio?

Two more I-81 briefing meetings this week in Onondaga County

The eyesore on the DeWitt Wegmans? There is a plan for that

To hear the latest news with Alexa every morning, please click here.

Delta Slicing ‘Like a Buzzsaw’ Via Oregon-California Border Counties