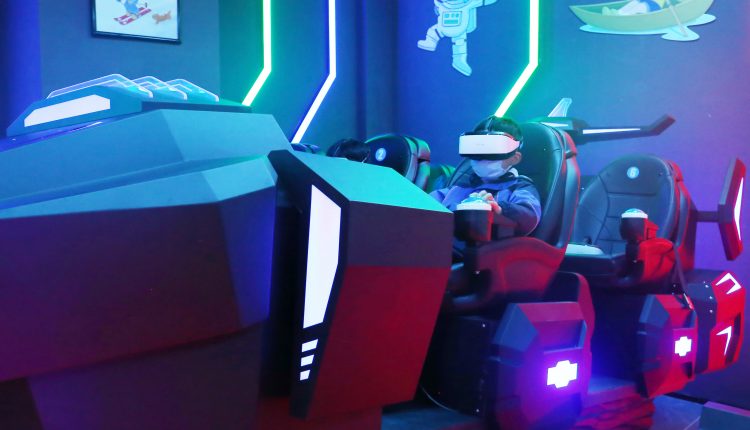 Citizens try out a virtual reality experience at the opening of Cheonan Qianshu Shopping mall, Shanghai, China, On December 22, 2021. Virtual reality is a key part of the concept of the metaverse.

Imagine this: the metaverse with Chinese characteristics. That’s how the virtual world that everyone’s talking about will likely look into the world’s second-largest economy.

China’s technology giants are beginning to invest in the metaverse — the latest buzzword in internet technology. It’s a term with no concrete definition, but largely taken to mean virtual worlds that people will be playing and living in.

Censorship will likely be rife and regulation tight as Beijing continues to keep a close check on the practices of its domestic technology firms.

US firms like Facebook parent Meta are going all-in on the metaverse concept, while Microsoft has positioned its proposed acquisition of gaming company Activision as a play on this theme.

Chinese firms are taking a more cautious approach. So what are they up to and how will regulation play out?

What are the apps?

In China, the total addressable market for the metaverse could be 52 trillion yuan, or around $8 trillion, Morgan Stanley said in a note published last month.

Companies like Tencent, NetEase, TikTok owner ByteDance and Alibaba could be the front-runners in this space among China’s internet companies.

Metaverse is the future of social networks. All China’s tech giants have to embrace it to find new ways to engage the youngest generation of internet users…

That comes down to the type of applications that could be part of the metaverse. Analysts say that virtual reality, gaming and social media could be some of the early applications.

This may include things like buying virtual items in games or creating digital avatars of yourself to participate in meetings.

“Metaverse is the future of social network. All China’s tech giants have to embrace it to find new ways to engage the youngest generation of internet users, which is critical at the time when their business models on smartphones and mobile internet are matured,” Winston Ma, managing partner at CloudTree Ventures, told CNBC.

China’s tech giants in the metaverse

In an earnings call in November, Tencent CEO Pony Ma said the metaverse will be an opportunity to add growth to existing industries such as gaming. Tencent is the world’s largest gaming company with a strong portfolio of PC and mobile games.

Tencent also owns WeChat, a messaging service with over a billion users that has social media aspects.

Ma said the company has “a lot of the technology and know-how building blocks” to explore and develop the metaverse.

Meanwhile, ByteDance has made an aggressive expansion into gaming over the last year. In August, the company acquired virtual reality headset maker Pico. ByteDance also owns TikTok, the short-form video app, and its Chinese equivalent Douyin. The Beijing-headquartered firm has laid foundations in VR, social media and gaming.

Alibaba this year said it plans to launch augmented reality glasses for virtual meetings. Augmented reality refers to virtual images overlaid on the real world. Again, this could be a play on the metaverse. The e-commerce giant launched a “virtual influencer” named Dong Dong for the Winter Olympics in Beijing. The digital avatar can be found on Alibaba’s Taobao shopping app and provides facts about the Olympics and also promotes items related to the Games.

NetEase, another one of China’s gaming giants, has set up a base in the southern province of Hainan focused on the development of metaverse applications, local media reported last year.

Search giant Baidu launched a metaverse app last year called XiRang, a sort of virtual world that can hold up to 100,000 people at once. Baidu executives, however, downplayed expectations of the app at its launch and said many aspects were not yet up to par. Ma Jie, a vice president at Baidu, said it could be another six years until a full launch.

Still, there are signs that China’s biggest technology names are beginning to experiment and lay the groundwork for future applications.

“Similar to the pitch we’ve seen from Meta, the metaverse concept may at first involved VR/AR-supported games and social interactive environments,” Charles Mok, the founder of Tech For Good Asia, told CNBC.

“These will obviously be the areas that China big tech players will follow first, with features that are advanced in China — such as payment, and WeChat-like integrated online services — that can be extended and built into the metaverse.”

The metaverse push by Chinese tech firms comes after an intense year of regulatory scrutiny on the country’s tech sector.

New anti-monopoly laws for internet platforms were proposed, while a landmark personal data protection law has been passed. Beijing has also cut the amount of time children under 18 years of age are allowed to play online games.

Analysts said these existing pieces of legislation will likely be used to regulate metaverse applications as well, even as new ones are developed.

“The sheer diversity of metaverse applications means developing a ‘one-fits-all’ set of policies will not be feasible for Beijing,” Hanyu Liu, China market analyst at Daxue Consulting, told CNBC.

“Each specific application would receive its own unique set of regulations that builds upon existing legislation.”

[China] knows just when and where it needs to stay its hand; close enough so that it can keep a careful watch, but not to the point where it would cause irreversible harm to the industry.

“We should also expect to see strict censorship, meaning there will most likely be an isolated, Chinese metaverse that is separate from the international,” Liu said.

There are more specific pieces of regulation that analysts said could be used to manage the metaverse.

In January, authorities passed a set of regulations that governs how internet firms can use recommendation algorithms. That was followed by draft rules regarding so-called “deep synthesis” technology. This relates to software that could be used to generate or edit voices, video or images or virtual settings. The two rules overlap.

“This overlap with the recent algorithm rule as specifically required by the new rule would have important impact on Metaverse companies in China,” Ma said.

Even Chinese cities and regions are looking at opportunities for the metaverse. Last year, the major city of Shanghai mentioned the metaverse in its five-year development plan for the information technology industry.

“China is extremely smart when it comes to this. It knows just when and where it needs to stay its hand; close enough so that it can keep a careful watch, but not to the point where it would cause irreversible harm to the industry, ” Liu said.

‘Each transfer scrutinized’: Fb’s rocky street to the metaverse | Meta