As part of our efforts to help expand connectivity around the world, Facebook Connectivity has been prototyping SuperCell, a wide-area coverage solution for increasing mobile connectivity in rural communities. Now, after working with telecom industry partners to conduct several trials and data analyses, we’re ready to share what we’ve learned.

Rather than produce this solution ourselves, we hope the results of our testing and analyses will provide a playbook for the telecom industry to bring the technology to market and help expand mobile coverage in rural areas in a way that is sustainable and cost-effective.

In many rural areas around the world, mobile is the only option for internet connectivity. But many rural communities still lack mobile internet access because the macrocell technologies that are traditionally used to deliver mobile connectivity to urban areas are simply not economically viable for remote communities in lower-middle-income countries. SuperCell is designed to be a cost-effective, reliable alternative to traditional macrocell sites and to better address the need for connectivity in rural areas.

According to the GSMA, 600 million people globally live outside of areas covered by mobile broadband networks. This coverage gap is particularly concentrated in rural and remote areas such as in sub-Saharan Africa, which is home to 67 percent of the world’s uncovered population. While the number of people online has been increasing year over year, only about 40 percent of people living in lower-middle-income countries are connected, compared with nearly 75 percent in higher-income countries. If current trends continue, the GSMA estimates that more than 40 percent of the population in lower-middle-income countries still won’t be online by 2025.

Mobile network operators (MNOs) face many challenges when it comes to shrinking the coverage gap. Rural areas typically generate a lower average revenue per user (ARPU) and thus a lower profit incentive. They also tend to be less densely populated, have a rugged topography, and lack cost-effective backhaul and grid power, making it difficult to expand mobile coverage in these areas.

SuperCell is a large-area coverage solution that leverages towers up to 250 meters high and high-gain, narrow-sectored antennas to increase mobile data coverage range and capacity.

Our field measurements found that a 36-sector SuperCell base station mounted on a 250-meter tower can serve a geographical coverage area up to 65 times larger than a standard three-sector rural macro base station on a 30-meter tower in the same topography. In an analysis of uncovered regions in Nigeria, using publicly available population density data coupled with insight from Facebook Connectivity’s Advanced Network Planning tools, we determined that a single SuperCell could replace 15 to 25 traditional macrocells, or hundreds of small cells, to provide coverage to the same number of people; and that a network of SuperCells could be deployed at more than 33 percent lower overall total cost of ownership (TCO) compared to a network of macrocells.

Considering the coverage gap, topography, and infrastructure needs in sub-Saharan Africa, we believe this is a region where SuperCell has potential for high impact.

How does SuperCell compare to alternative solutions?

The table below provides a brief summary of some of the pros and cons of various solutions, including SuperCell.

How we developed and tested SuperCell

Globally, cellular spectrum bands such as 2G, 3G, and LTE tend to range from 600 MHz to 2.7 GHz. Typical base station antennas used in macrocell deployments have a gain of 18 dBi in the 2,500 MHz band. SuperCell uses antennas that provide directivity gain of up to 29 dBi in the same band. By combining the two, we get a total propagation advantage of 29 dB (18 dB from the height advantage and 11 dB from the antenna directivity gain). Note that both the propagation advantages (tower height and antenna gain) hold symmetrically for both uplink and downlink. Assuming a path loss exponent of 4, the 29 dB propagation advantage of SuperCell translates to ~5.3x range advantage. 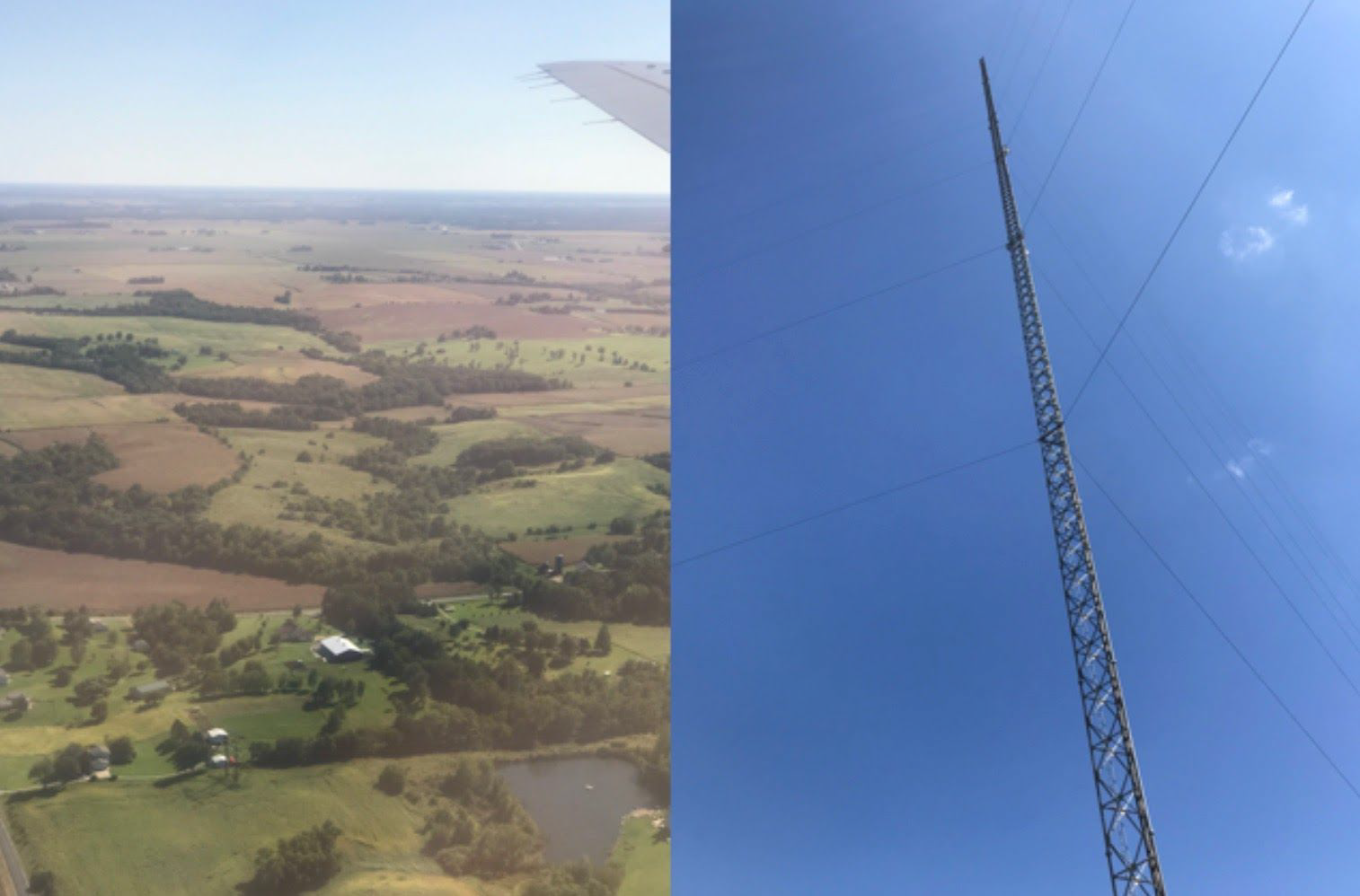 Left: The flat rural terrain around the site in Quad City, Illinois. Right: The 300-meter guyed broadcast tower used for the coverage experiments.

Drive testing demonstrates the coverage advantage of a 36-sector SuperCell on a 250-meter tower over a standard three-sector macrocell in Quad City, Illinois (top), and Metcalf, Georgia. (bottom) The red marker in the pictures indicates a point that is 20 kilometers from the base of the tower sites. (Map data: Google)

SuperCell’s coverage advantage implies that it covers more people, which in turn implies that the capacity served by the SuperCell base station must scale accordingly. The available spectrum is often limited, so this higher capacity has to come from increased area spectral efficiency. SuperCell employs high order sectorization (HOS) with a frequency reuse of 1 across sectors to address this. However, one of the key challenges of scaling capacity with HOS is intersector interference, which can result in capacity scaling less than linearly with the number of sectors. This can be caused by:

We hypothesize that typical uncovered rural regions have single-story rural construction with an average building clutter height of less than 10 meters. As part of our tests in Amarillo, Texas, we mounted a directional dish antenna receiver on a 300-meter broadcast tower at a variety of heights. Using a patented technique, our team experimentally characterized the angular spread as a function of base station antenna height up to 250 meters and ranges up to 20 kilometers.

As part of this test, we conducted extensive ray tracing simulations for the rural neighborhood around the Amarillo test site using the available building clutter information. The test demonstrated that the large differential between the average height of the building clutter and the height of the SuperCell base station resulted in low angular spread. This in turn enabled low intersector interference and a better scaling of capacity with respect to the number of sectors. 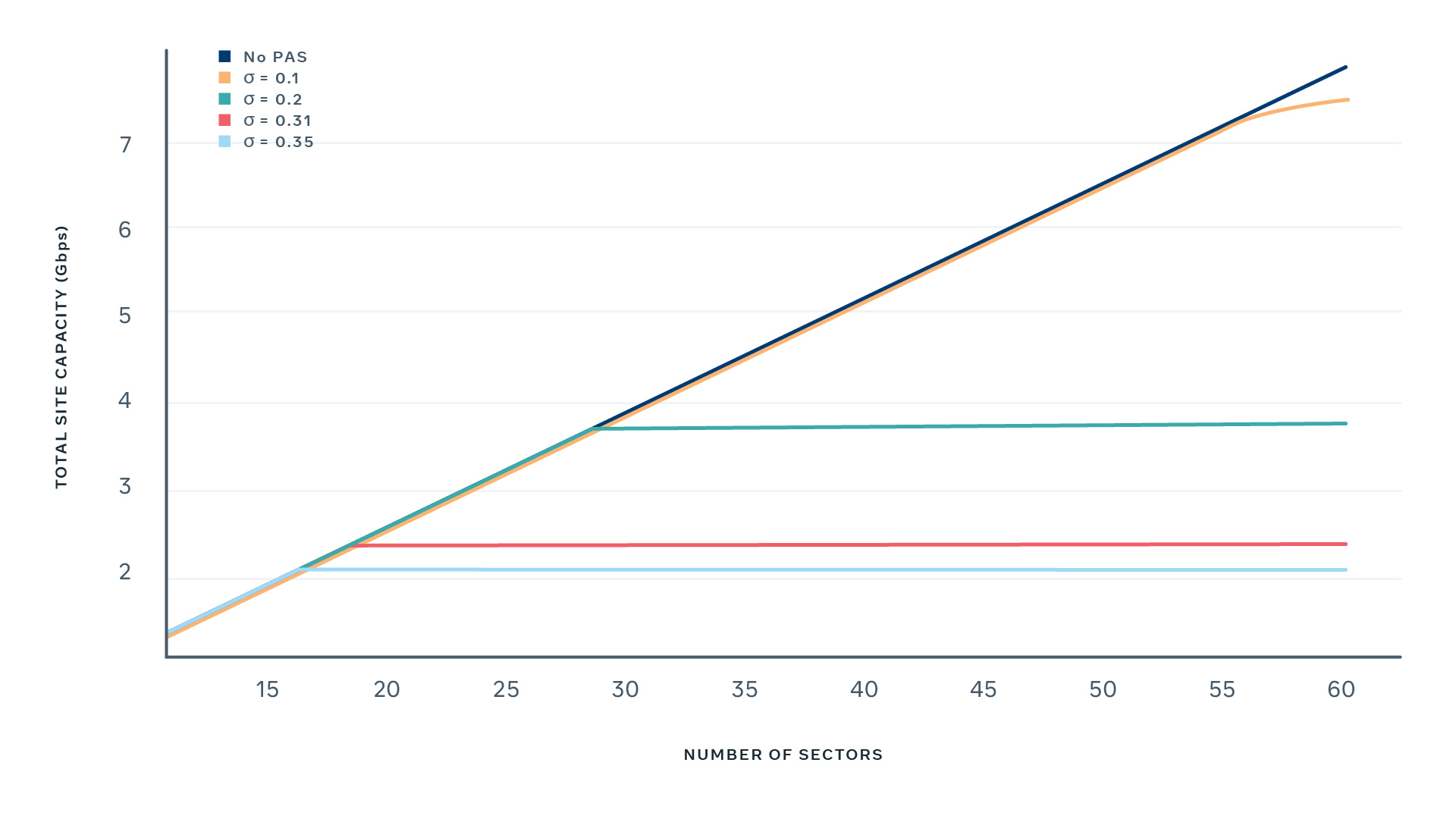 Better capacity scaling with respect to the number of sectors can be achieved if the power angular spread is lower.

The experiments done in Quad City, Metcalf, and Amarillo provide evidence of SuperCell’s advantage over the coverage and capacity of traditional macrocell solutions.

Once our team experimentally verified SuperCell’s coverage and spectrum efficiency advantages, we set out to verify SuperCell’s throughput performance using LTE waveforms at long ranges, intersector handoff performance, and its performance on some common applications like video streaming and video and voice calls.

Our team conducted end-to-end SuperCell LTE testing using a 12-sector antenna system (over 120 degrees of azimuth) in a rural area near Truth or Consequences, New Mexico. The SuperCell base station was mounted on an 11-meter tower atop a hill overlooking a valley. The vertical separation between base station antenna and the user equipment ranged from 150 meters to 335 meters, depending on the location of the user equipment on the drive test route. The test location had a rocky desert topology with minimal foliage, and tests were conducted using LTE Band 41 (2,500 MHz). 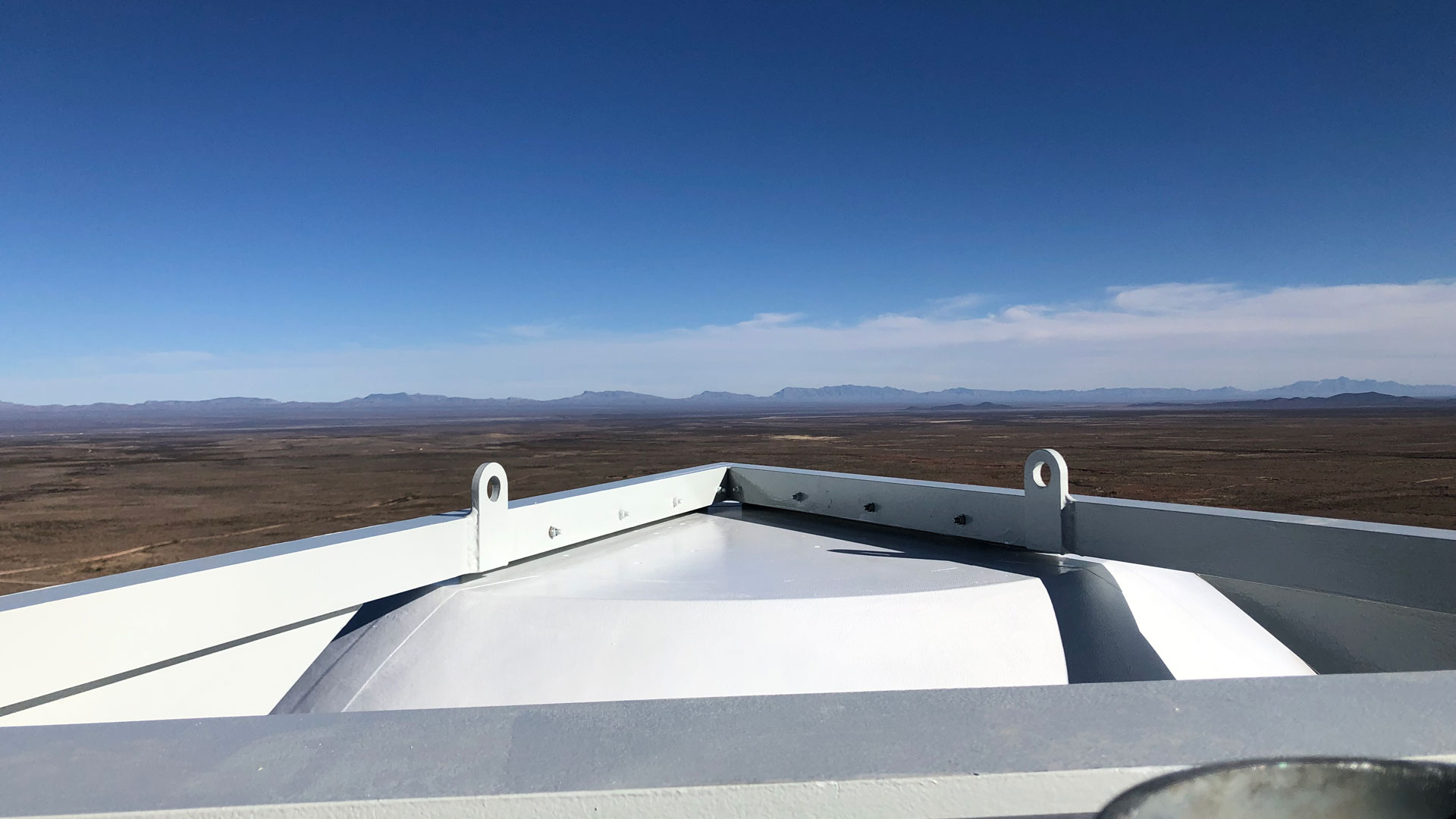 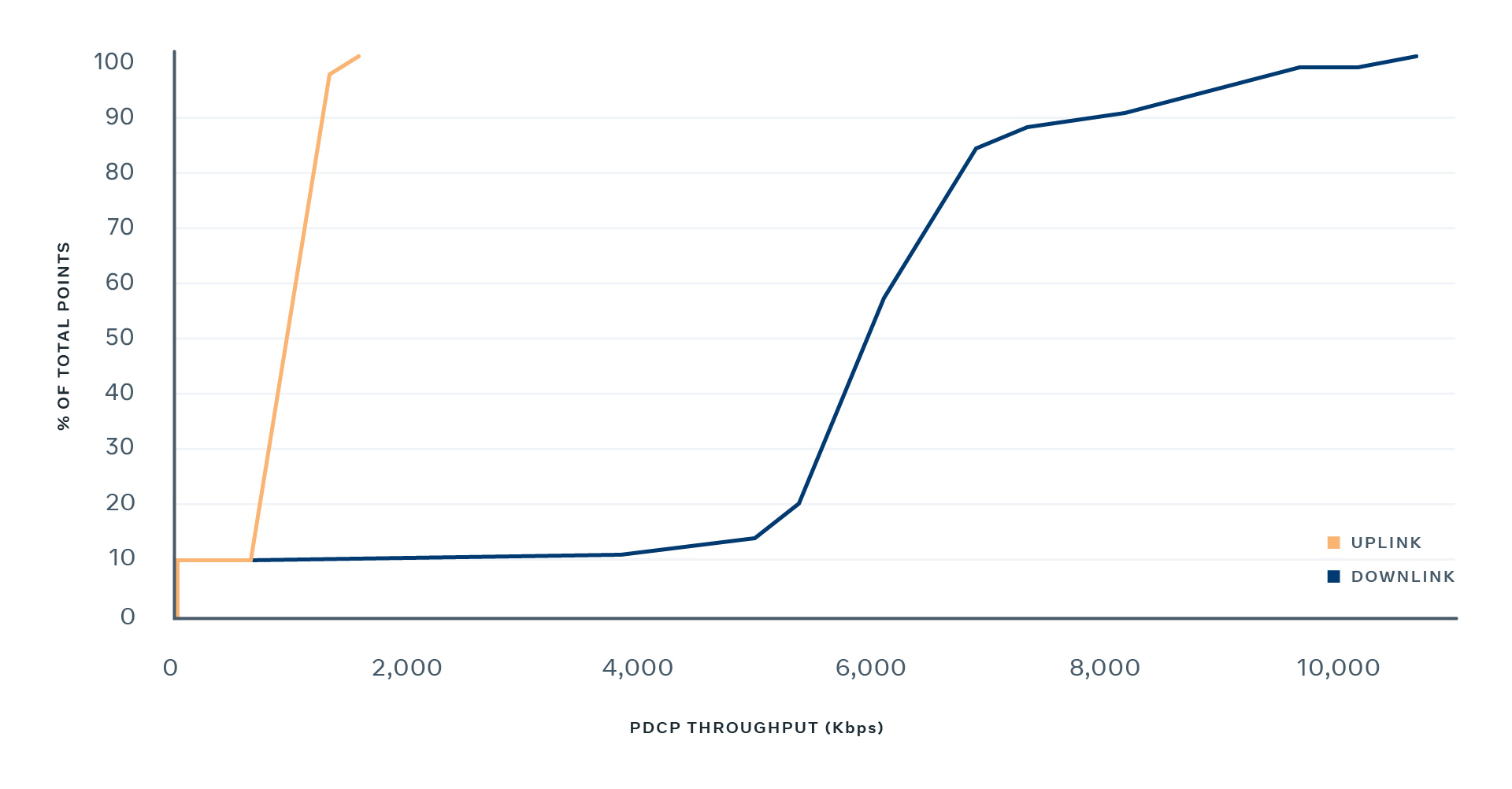 Top: A panorama of the New Mexico field test area. Bottom: CDF of uplink and downlink throughput from a Samsung S7 user equipment situated 40 kilometers from the SC base station.

We collaborated with American Tower Corporation (ATC) and C Spire for these trials. The New Mexico trial was conducted in a TD-LTE band, but many MNOs in Africa use LTE in FDD bands. For the New Mexico trial, the SuperCell base station was installed on a small tower on top of a hill overlooking a valley. The idea was to emulate a tall tower so the logistics of installing a massive SuperCell base station atop a tall tower were not fully understood. We addressed these residual risks with another trial in the unincorporated community of Foxworth in Marion County, Mississippi, about three miles southwest of Columbia, Mississippi, along the west bank of the Pearl River.

An important objective of the Foxworth trial was to develop an experimental understanding of intercell interference between SuperCell and macrocells. We set up Cell on Light Truck (COLT) macrocells at near-field (4-kilometer), midfield (10-kilometer), and far-field (16-kilometer) ranges from the SuperCell base station. 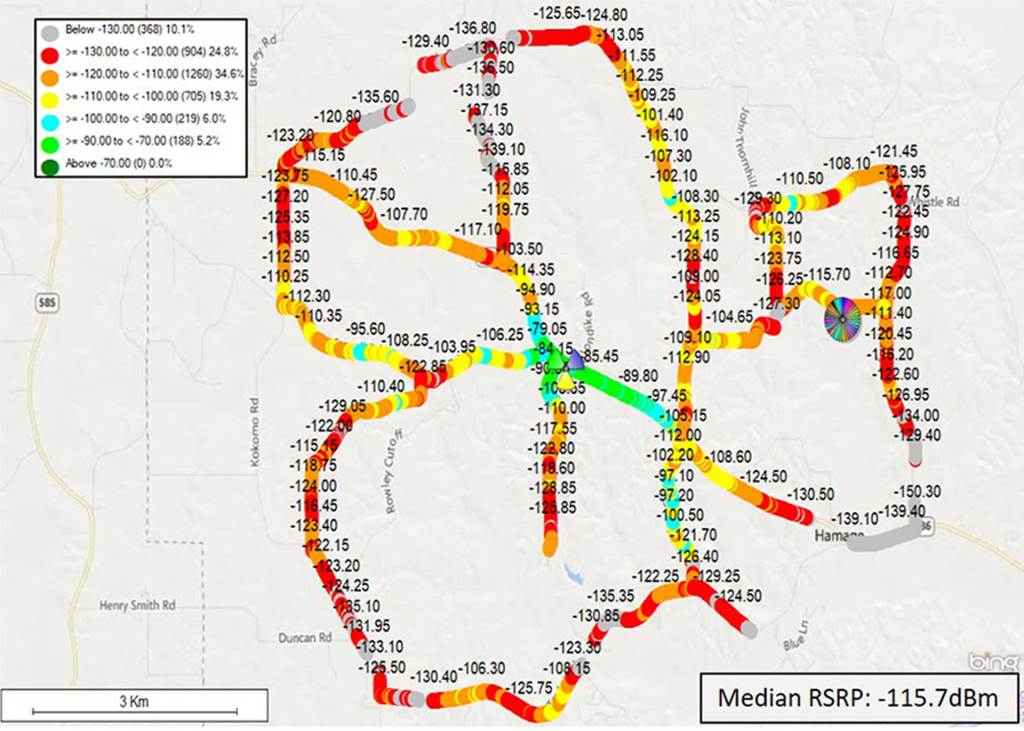 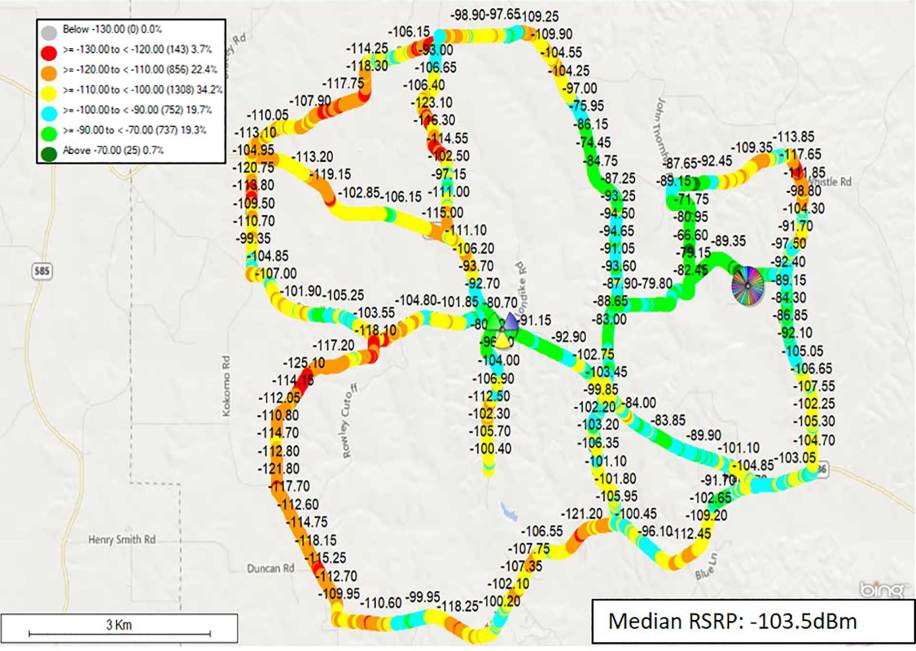 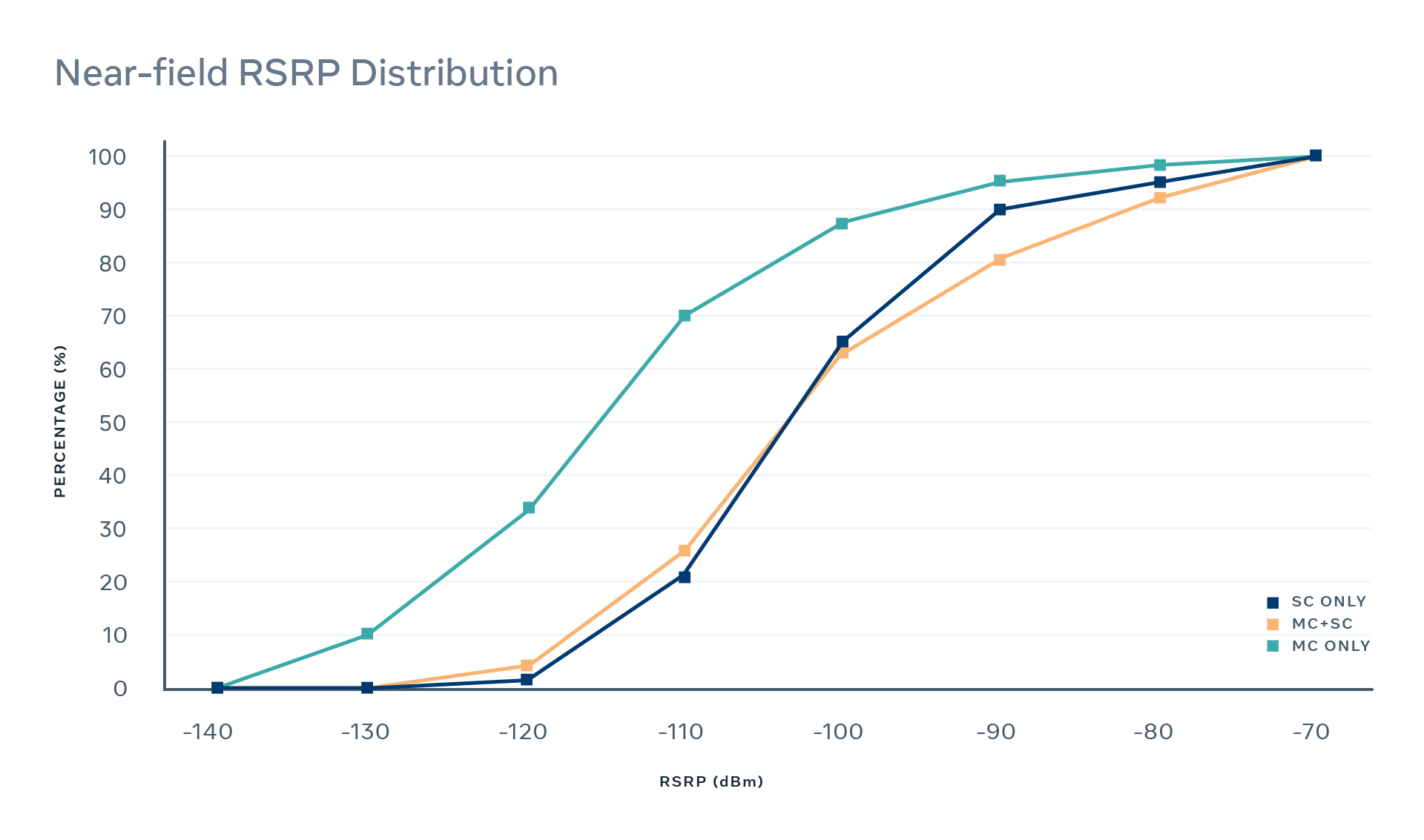 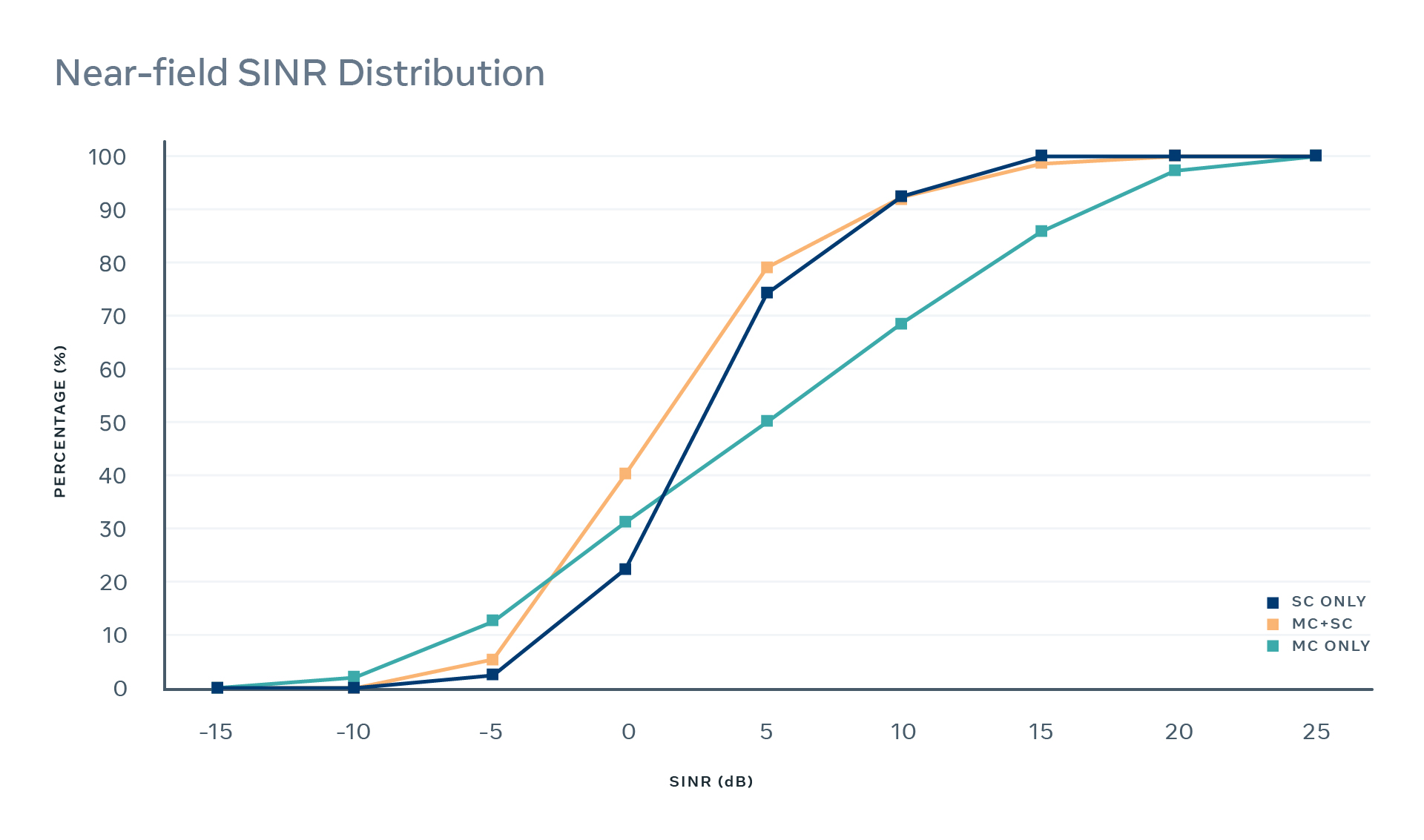 RSRP and SINR distributions for the three cases (MC only, SC only, MC+SC).

Similar tests were performed for midfield and far field, and are available in our detailed technical publication.

What’s the economic value of SuperCell?

As mentioned earlier, we analyzed the potential for SuperCell in uncovered regions of Nigeria using publicly available population density data coupled with insight from Facebook Connectivity’s Advanced Network Planning tools. For this analysis, we selected optimal locations for SuperCells and macrocells (conventional three-sector base stations on 30-meter towers) to cover the uncovered populations in the region with similar quality of service, and examined what coverage would look like if 82 SuperCells were placed in the region.

A financial comparison using internal rate of return (IRR) to estimate the profitability of potential investments showed that 76 of the 82 SuperCells in this simulation would have a higher IRR than an equivalent macrocell network. The analysis showed that SuperCell installations on existing tall towers in Nigeria could provide coverage to up to 16.8 million uncovered people in the region — making the business model profitable for both MNOs and tower companies. 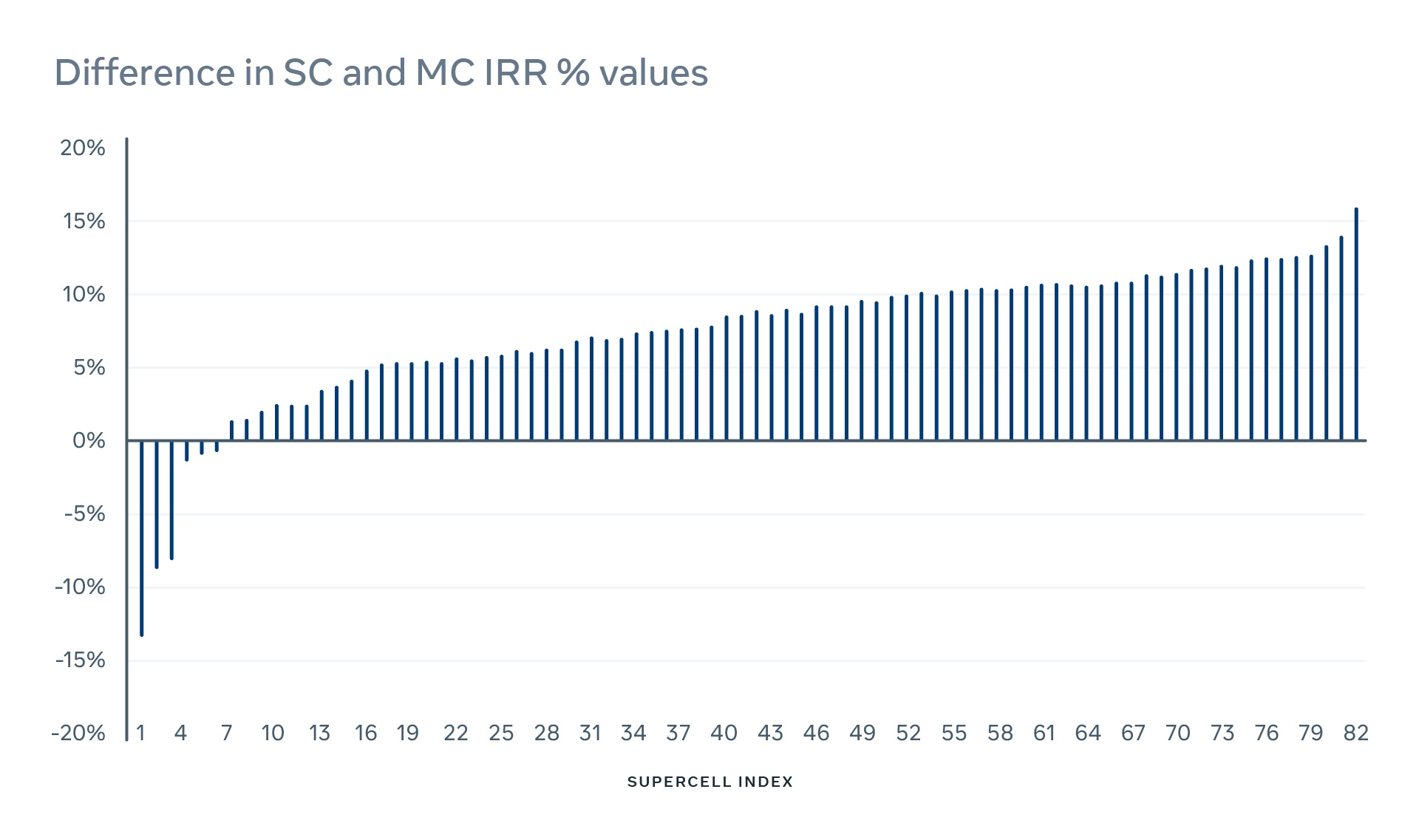 Our techno-economic analysis compared four different homogeneous network plans built exclusively using the four cell site configurations described above. The output of the analysis in terms of net present value (NPV) of each plan, number of new sites, and incremental covered population is shown in the figure below.

Practically speaking, an optimal network plan would be a heterogenous combination of the four cell site configurations listed above. Future work will explore this further. 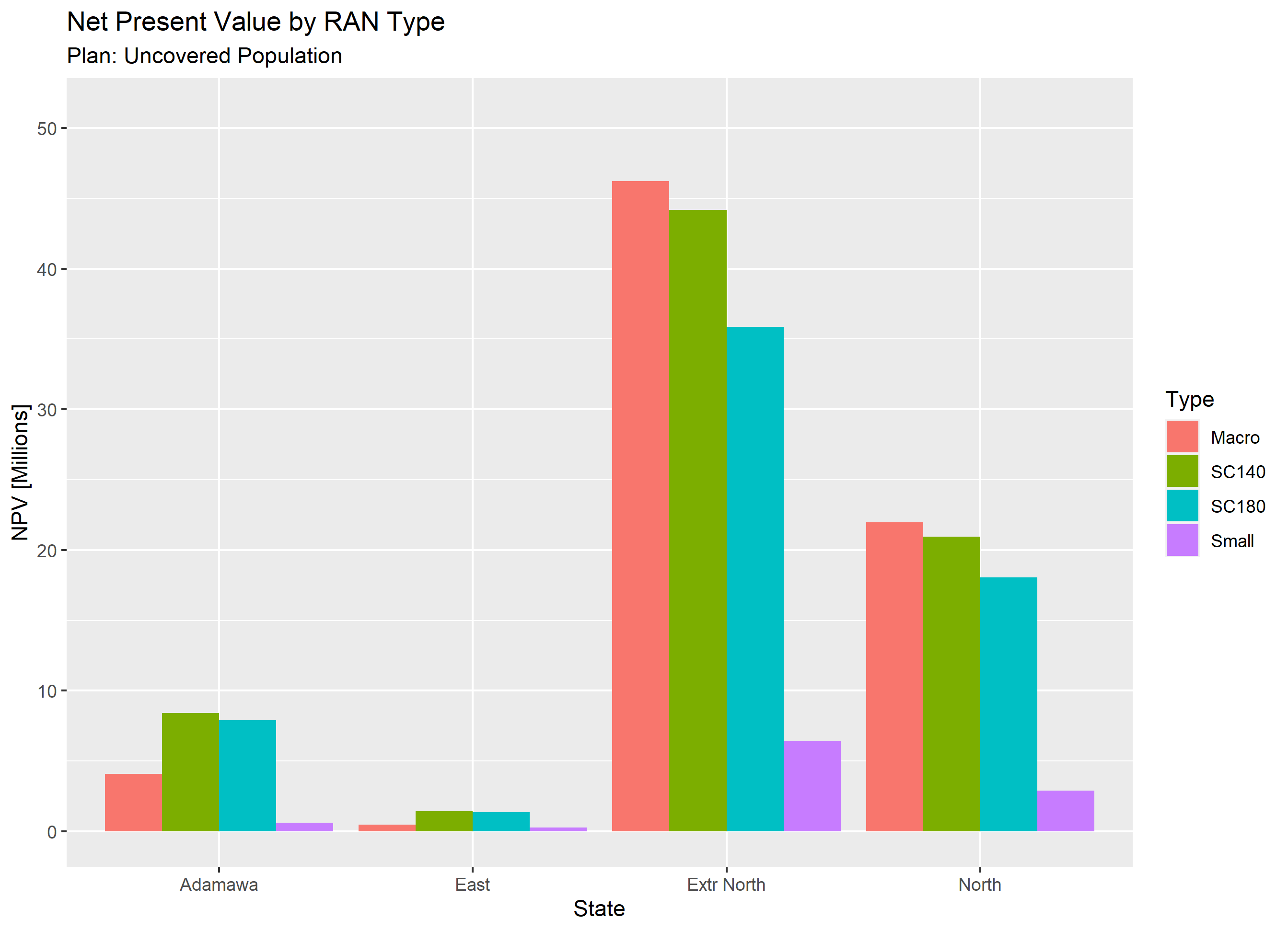 Net present value comparison of four network plans for four states in Cameroon. Two configurations of SuperCell (on a 140-meter tower and a 180-meter tower) were used for this analysis.

Now that we’ve completed partner tests and trials and proved SuperCell’s effectiveness, we’re ready to pass it to the wider telecom industry, and we hope additional partners will join and commercialize the SuperCell technology.

In addition, the Telecom Infra Project (TIP) recently created solution groups to validate end-to-end open network solutions, including a subgroup focused on Network as a Service (NaaS) solutions. Facebook Connectivity will contribute SuperCell technical trial data and business model information to this group, which can be used to help address the lack of high speed internet access in rural and peri-urban areas.

While the connectivity gap is narrowing, the need for connectivity all over the world is accelerating. If more is not done to expand global connectivity, entire communities will be at risk of being further left behind as access to jobs, education, and services such as health care become increasingly dependent on internet connectivity.

SuperCell can provide a cost-effective solution for MNOs and towercos, providing high-speed, reliable connectivity for rural communities and closing a coverage gap that other solutions have yet to fill. With technologies like SuperCell in place, service providers can help ensure that no one is left behind in a connected future.