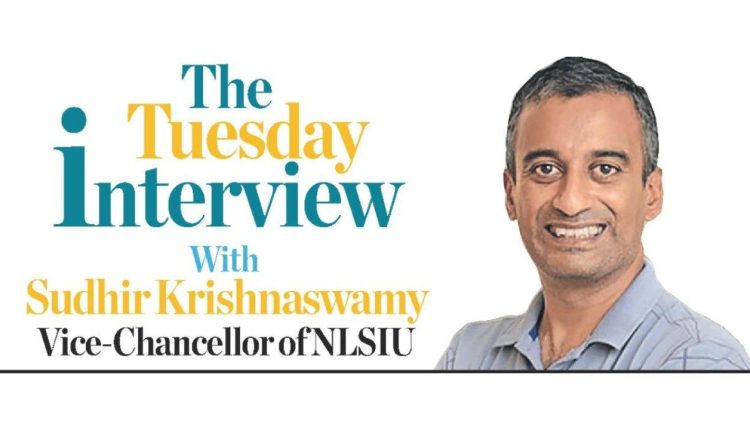 ‘Social media wants regulation, however not of the regime-dependent selection’

Separating out the criteria for reservation could deny its benefits to people who are genuinely disadvantaged, says Sudhir Krishnaswamy, Vice Chancellor of the National Law School of India University (NLSIU). His observations come against the backdrop of the Supreme Court verdict which upheld the 103rd Amendment to the Constitution, introducing 10% reservation for Economically Weaker Sections (EWS) in government jobs and educational institutions. A Rhodes scholar, Krishnaswamy is also co-founder and trustee of Center for Law and Policy Research, a not-for-profit research trust. The Infosys Prize 2022 winner in the Humanities stream spoke with R Krishnakumar, of DH, on NLSIU’s expansion plans, his civil society engagements and the complexities of social media regulation. Excerpts from an interview:

How would you sum up your three years at NLSIU?

In 2019, there was a sense of multiple crises – there were financial issues, there was student discontent, and there had been no faculty recruitment at the University for about a decade. From there, things look hugely different. We have overcome the initial constraints and have positively transformed the university. We now have top-class faculty from across the world. The financial issues have been solved and now we are expanding. The level of student engagement has also changed substantially. All of us were deeply affected by Covid. Despite that, we’ve pulled through. Today, the challenges are different – it is now about how well we could rebuild the infrastructure and bring in new programs.

The NLSIU has mooted multidisciplinary programs and formation of university clusters with institutions like IISc and IIM.

Regarding the clusters with IISc and IIM, we are looking forward to a formal signing and announcement, along with a joint public lecture, very shortly. The NEP is pushing along the lines of building multidisciplinary universities of reasonable scale. We are heading in that direction too. In the next tranche of new programs, we will redesign the BA LLB – our flagship program – by the academic year 2024. We will, hopefully, also launch a new slate of programs in the academic year 2025.

What constitutes your vision for NLSIU, and the graduates as they leave the institution?

This institution was built by a very motivated founding team that managed to instill a public spiritedness in the early generation of students. We have to rediscover that. We are a very disruptive institution – the graduates have gone out and pursued multiple professions; they are not all lawyers. We want our students to have that public-spirited imagination and embrace various leadership roles.

The real challenge is in the spheres of policy and knowledge research. We are quietly building those capabilities. There is healthy on-campus engagement with subjects like the data protection bill. Sometimes we help the government; we also write about these topics. For example, our faculty have produced various papers on the EWS (Economically Weaker Sections) reservation. There are no echo chambers here; there is distinctiveness of voice and position. That is the sign of a healthy university. If we were to establish a different metric for this university’s success, it would be – can we make a positive contribution to the reform of the legal system? Can we make a positive contribution to the understanding of law and policy issues across areas?

What does the Supreme Court verdict upholding reservation for EWS mean, in relation with objectives entailed in affirmative action?

The idea that we can use social and economic backwardness as an index of backwardness is not new. The question is, why drop the social criteria? I can anticipate an argument that says there are communities that may not have the attributes of social backwardness but still require some support but no evidence has been put out that there is systematic discrimination in this manner, against people on the grounds of economic backwardness alone. Regarding the judgment, the government has been pressed to produce more data. When an entirely new category has been carved out, where was the question of empirical evidence? It never came up in the arguments. It was very surprising because in the other evaluations on social and economic backwardness, we keep asking – where is the data?

My view is that there is a genuine need for an intersectional approach to discrimination; meaning, when people come with social backwardness, and disability, and economic backwardness, they are triply disadvantaged. Instead of developing a genuine intersectional index to classify people, we are separating out the criteria which is ultimately going to deny the benefits from this to people who are genuinely disadvantaged.

You are a member of the Oversight Board. How do you view the calls for social media accountability and regulation?

The argument for platform regulation is now accepted all around, I don’t see even large tech companies arguing against it. The only question is about the model of regulation. One way is to have the state as the regulator which will leave the system regime-dependent. The promise of new media is that it will allow for a social sphere that is not dependent on the political regime. What is the alternative? Self regulation doesn’t seem to be working well either. The third model is what we have at the oversight board where we try to distance ownership from content moderation and not allow the state to determine those boundaries.

How has your standing as a member of civil society groups complemented/influenced your work as an academic, and as an institutional head?

All through my engagement in these three roles, the one rule I’ve followed is to keep these three spheres separate. When I represent NLSIU as the Vice Chancellor, I’m very clear that there is no sideways concern that I will bring in. When we engage with civil society as academics, it helps us understand social worlds better than what we can understand on our own . The civil society role allows for that groundedness.