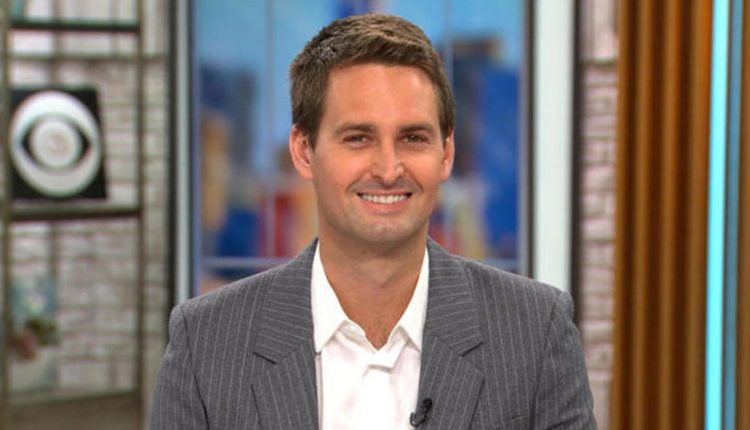 Snap CEO and co-founder Evan Spiegel said he supports government regulation of social media platforms, including his company’s popular Snapchat app, but he noted that the burden ultimately falls on the industry itself.

Speaking on “CBS Mornings” Monday, Spiegel touted Snap’s focus on the “real world” and “real friendships” and expressed support for potential new laws regulating the industry — an issue that has drawn the attention of Democrats and Republicans in recent years.

“We definitely support thoughtful regulation,” he said. “But I think the really challenging thing in the technology industry is that technology moves so quickly that regulation is not a substitute for moral responsibility.”

Besides the constant technology changes, Spiegel said social media companies should step up because of the number of people they reach. Snap reports more than 600 million people use its app every month, and about 330 million use it daily. Facebook reported an average of nearly 2 billion daily active users last month while Twitter reports about 230 million.

“We need to be really thoughtful and deliberate [in] building our products and making sure they have a positive impact in the world,” Spiegel said. “Thoughtful regulation is important, and there’s a lot of progress there. Europe’s been moving very quickly here. I think the United States will follow. But it’s just not a substitute for taking responsibility.”

Spiegel also sought to differentiate Snap from its competitors when it comes to unhealthy social media use among teens. Snap and Facebook parent company Meta are the target of a lawsuit by a mother who alleges they are responsible for her daughter’s death.

The two companies previously said they could not comment on pending litigation. In a January statement, a Snap spokesperson said the company was “devastated” to hear of the girl’s death and was committed to keeping its users safe.

Spiegel said Snapchat features many mental health resources and has always focused on authentic connections. Likes and comments on the app are not public.

“We purposely built Snapchat to support real friendships so people have to both opt in to a conversation,” he said. “So there isn’t that social pressure to look pretty and perfect all the time. If you look at our content platform, we actually curate that content platform. We decide what’s allowed to be distributed on Snapchat.”

The reason the app is focused on friendships is because there’s a “clear relationship between friendship and mental health,” Spiegel said.

“In fact, one of the best predictors — the No. 1 predictor of mental health and your ability to withstand a depressive event — is a real friendship, and is your ability to just share how you’re feeling,” he said.

And while there’s a growing focus on the metaverse — with companies like Meta investing billions of dollars on the technology — Snap is betting on the future of augmented reality, an interactive technology that places computer-generated images over the real world through an AR lens.

“Our big bet is on the real world,” Spiegel said.

“We took all the tools that we were using to build AR effects ourselves and made them available to the whole world so that anyone could build augmented reality lenses and share them with the community,” he said. “Now there are hundreds of thousands of developers who built over 2.5 million lenses that are used by 250 million people every day on Snapchat.”

How the Cinder JIT’s perform inliner helps us optimize Instagram