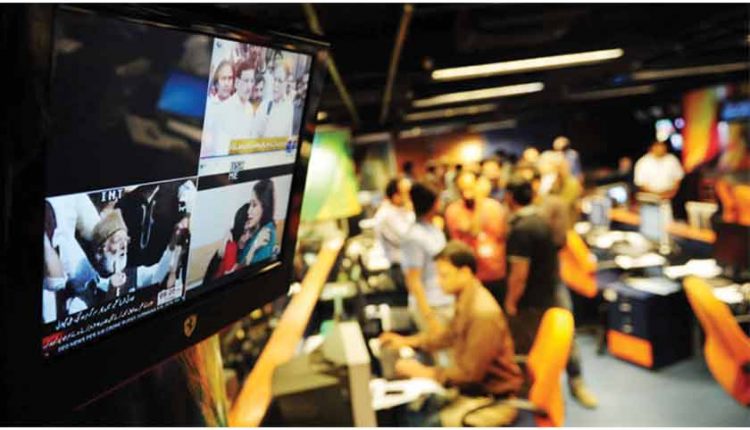 he newspaper industry is weaning away faster than what ever expected. But broadcast media, too, in Pakistan and elsewhere is going downhill. Besides the rise of digital and social media, the presence of just too many news channels, worsening economic conditions, restrictions on media freedoms and the state’s content control over media are major factors behind a rapid decline in mainstream news consumption in Pakistan.

Most news channels launched in Pakistan in recent years are struggling to survive despite huge investments. Many had ignored market research before venturing into the business. The situation worsened when the PTI government took over. It stopped advertisements right away and refused to pay the arrears incurred by the previous regime on the pretext that its predecessors had not followed merit. The government decision impacted all channels, big and small.

This resulted in delays in payment of salaries to journalists while management resorted to big cuts in their salaries besides laying off thousands of media workers. There are over 30 news channels broadcasting news and current affairs programmes. With a few exceptions, the news channel owners are not paying salaries to their staff on time. In many cases, managements have failed to clear arrests even after receiving Covid relief. The Pakistan Federal Union of Journalists has estimated that over 7,000 journalists and media workers lost their jobs in the last four years. A fraction of the number managed to find alternative jobs for far lesser salaries than they had been earning before 2018. Almost all news channels and publications have scaled back their operations. A couple of news outlets have had to shut down their businesses after failing to meet the rising costs.

There are other factors too. In the absence of a mechanism for generating revenues from cable operators, news channels are dependent on the earnings from on-air advertisements by the government and private business entities – both have slashed their marketing budgets considerably due to the economic slowdown. Another major problem faced by news channels is that they do not charge subscription fee from viewers. Instead, cable operators mint handsome amounts of money from channel managements who want to ensure their respective channels remain in the bouquet.

The advent of digital media has dented satellite TV in many parts of the world. A survey in the US found that over 80 percent of news is now consumed through digital and social media platforms. Many broadcast journalists have been forced out. They have found new avenues in digital platforms like YouTube and Facebook to provide independent content. The government exerted pressure on media owners to pull some journalists off the air for being too critical of the state. Ironically, this proved a boon for some TV journalists.

The grant of DTH licenses has been pending for many years due to security clearance and legal issues. Only recently has the Pakistan Electronic Media Regulatory Authority (PEMRA) started exploring new regimes for licensing, such as Television Audience Measurement (TAM), Over the Top (OTT), Teleporting, etc which is likely to generate more job opportunities in Pakistan. The government hopes to collect advance tax from the licensees at the time of issuance of licenses and their renewal.

Three licenses for launching DTH in Pakistan have been approved by the authority and the government expects an investment of approximately $2 billion to $3 billion in various projects. This could give a boost to the news channel industry if it proceeds without undue hurdles. It is also going to help end the ‘blackmail’ by cable operators who were already worried by some companies laying fibre-optic cables to provide top quality live video streaming to customers.

Meanwhile, the situation has improved a bit after the PEMRA awarded licenses to more news and entertainment channels. Most of the licenses have been acquired by real estate tycoons who are venturing into the business of electronic and digital media despite the historic economic meltdown the country is facing. This has helped some TV journalists get back to work after having remained jobless for months and years. Moreover, 2023 is expected to be an election year so that the news channels that had curtailed newsroom staff are again on a hiring spree.

A few structural changes are required to make the media industry competitive and vibrant. An autonomous PEMRA can play its role by revisiting its regulatory policy for the smooth functioning of a healthy media domain in Pakistan. There is also a need to make the financing models of media outlets sustainable by reducing dependence on government funding. Greater reliance on subscription might make media more viable besides improving the ratings system. This needs to be done to break the monopoly of a single company that has been accused of tampering with rating meters to favor one or the other news network. There is also a dire need to promote research on regulation, media market, media politics and global best practices.

Media experts believe that while television viewership will continue to decline in the years to come, the future of digital and social media is bright.

The writer is a senior broadcast journalist, and has worked with several news channels in Pakistan