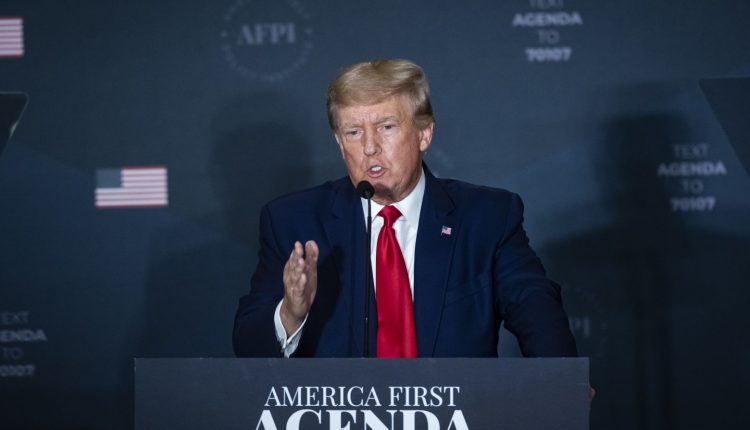 The threat to democracy metastasizing from former president Donald Trump’s refusal to accept defeat stretches beyond elections and into federal agencies and their employees.

An attempted breach of an FBI office in Cincinnati earlier this month, allegedly by a Trump supporter, resulted in the attacker’s death. That followed angry rhetoric from the former president and Republican politicians after FBI agents searched Trump’s Mar-a-Lago estate in Palm Beach, Fla.

Vitriol by GOP members of Congress — including comparing the federal government to “the Gestapo” of Nazi Germany and proposing to “defund the FBI” — is just the latest example of boiling aggression that extends across the government. Trump fanned that flame when he shared on social media an article titled “The Fascist Bureau of Investigation” — an incredible act by a former president.

But the right-wing anger goes past the law enforcement agency to include scorning feds generally, hitting the Education Department for curriculums it doesn’t control and efforts to improve tax collection.

Certainly, pointed criticisms of federal workforce performance and government programs are always fair game. That’s essential for improvement, and good government demands that no individuals and no institutions are above Rebuke.

Yet the tenor of some recent condemnations reeks of efforts to destabilize the government — and some experts and federal insiders worry that’s exactly the point.

A NBC News poll released this week suggests voters are waking up. The survey found “threats to democracy” is their top issue — more than the economy and other hot-button concerns.

Elections are a foundation of democracy, but “Republicans have convinced a large number of people that election results can’t be trusted,” Del. Eleanor Holmes Norton (DD.C.) said in an interview, “which, of course, means that decisions by those elected officials are illegitimate.”

Asked for comment, the Republican National Committee (RNC) deflected. “Dangerous rhetoric from the left led to an assassination attempt on a US Supreme Court Justice, a shooting at a Congressional baseball practice, Molotov cocktails at pregnancy centers, rampant crime in major cities, and an open border,” RNC spokesperson Emma Vaughn said by e-mail. “Call out the left on their threatening hyperbole, then we will talk.” Trump’s office did not respond to a request for comment.

Trump encouraged the current rage against the federal government in late July when he referred to an imaginary cabal of feds determined to thwart him.

“To drain the swamp and root out the deep state, we need to make it much easier to fire rogue bureaucrats who are deliberately undermining democracy,” he told the America First Agenda Summit, “or at a minimum just want to keep their jobs. ”

Comparing nonpolitical civil servants to swamp dwellers, as he also did during his first presidential campaign, set the stage for a Trump executive order that would have stripped workplace protections from thousands of civil servants by allowing them to be fired at will. President Biden quickly rescinded Trump’s order, which would have created a “Schedule F” employment category, but Trump and his people don’t want it to die. Axios recently reported that a Trump ally estimated 50,000 workers could be lumped into the category if he takes office again.

The civil service is designed to protect not just public servants, but also the public from a politicized bureaucracy that plays partisan favorites. “Imagine if scientific reports, food safety inspection results or common financial reporting regulations could be swept aside because they were politically inconvenient,” said Teresa W. Gerton, president and CEO of the National Academy of Public Administration, a congressionally chartered nonpartisan think tank. “How much further would trust fall?”

Trump elevated state and local culture wars to the federal level when he proposed killing the Education Department. “We need to implement strict prohibitions on teaching inappropriate racial, sexual and political material to America’s schoolchildren in any form whatsoever,” Trump said at the Conservative Political Action Conference this month, “and if federal bureaucrats are going to push this radicalism, we should abolish the Department of Education.”

Conservatives have previously called for abolishing the department based on long-standing Republican concerns about the size and role of government, but not on specific education issues feds don’t control. At one point last year — but no longer — the Education Department did reference specific, incisive anti-racist writings in a request for comment on history and civic education proposals. That, apparently, is enough for Trump to abolish the department and rage against “federal bureaucrats.”

It’s a derisive but popular term among government complainers. “That is the equivalent of calling a doctor a quack or a lawyer, an ambulance chaser,” said Max Stier, president and CEO of the Partnership for Public Service, which studies the federal government. He cited polling data that indicates a 50-point decline in support for federal employees when they are called “federal bureaucrats.”

Lamenting “an assault on government’s capacity,” Donald F. Kettl, professor emeritus and former public policy dean at the University of Maryland, said that “every private-sector leader would quickly tell us that their businesses can never be successful if they spent their time running down the very people in charge of producing results.”

“Are they going to have a strike force that goes in with AK-15s already loaded, ready to shoot some small-business person in Iowa?” Grassley wondered on “Fox & Friends.”

For conservative analyst Bill Kristol, an organizer of Republicans for the Rule of Law who held high political positions in the Reagan and George HW Bush administrations, comments like Grassley’s mean “there’s a big market out there on the right for attacks on the federal government, which are different from just saying we should have small government or we should reform parts of the government. It’s really, ‘They’re out to get you. There’s a conspiracy to get you,’” he said in an interview. “That’s the only way those attacks on the IRS make sense.”

But the attacks on the IRS, other agencies and federal employees make sense if delegitimating government is the point.

“I do think that both the policies and rhetoric that took hold during the Trump presidency led many people to question the legitimacy of government,” said Everett Kelley, president of the American Federation of Government Employees. “They delegitimized everything from the Constitution to elections to Congress to law enforcement to the missions of our agencies … So, he did succeed in delegitimizing government and people’s trust in our institutions of democracy.”