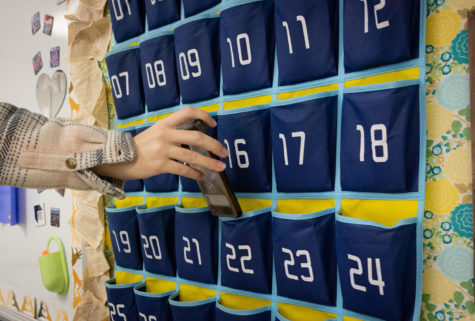 Junior, Ally Brower, walks into class each day surrounded by students who share the same kind of attachment to their phones as she does, but there is one difference. Her peers fall into temptation each day and stay on their phone during the duration teacher instruction and lecture. The teacher has to repeat themselves over and over again because the students are distracted by their phones, so students like Ally have to hear instructions time and time again because of her peers’ lack of control.

Cell phone and earbud policies have been relaxed the last few years as both students and staff navigated the years of Covid. Regulations dwindled, so we experience the tradeoffs of having to go back to old regulations and experience a classroom that embodies what we had previously. Students noticed an abrupt shift when they stepped into class this year and teachers asked them to put away their phones and take out their earbuds. Are these changes too strict since high school students are old enough to manage their education or are teachers helping students in the long run?

First of all, these policies are strictly in the hands of the teacher and therefore vary between classrooms. This power comes from the administration, specifically principle, Dr. Suzanne Leake, who believes in the teacher’s choice when it comes to phone policies.

Some argue that students struggle to resist internet temptation when others are accessing it because of our brain’s need to know what others’ are doing. Chemistry teacher, Kristen Walerowicz, said students have mirror neurons that entice us to check up on the virtual world.

“Mirror neurons, that when somebody sees one person on their phone, they will want to do it too, that’s just an instinctual habit,” Ms. Walerowicz said.

Students struggle to resist temptation when others have already fallen into it, but are all students to blame for cell phone policies? Some students are frustrated along with teachers by students being on their phones.

“ I totally agree with teachers when it comes to putting phones up while they’re talking because students are very disrespectful,” Ally Brower said. “They ask a bunch of questions when they missed a lecture, which takes away from everyone who was focusing during the lecture.”

I totally agree with teachers when it comes to putting phones up while they’re talking because students are very disrespectful. They ask a bunch of questions when they missed a lecture, which takes away from everyone who was focusing during the lecture. ”

Other students have become frustrated with their peers around them disrupting the learning environment. Besides distraction, phones also come with increased stress to keep moving. dr Leake expresses concern for her student’s stress levels when it comes to the fast pace of our society due to our high technology usage.

Technology has greatly impacted the classroom and more importantly the teacher’s ability to manage their agenda with student interruptions. English teacher, Mrs. Sarah LaRue, has taken notice of the frustration that comes with student’s using phones inappropriately.

With the increase in dependence on technology in today’s society, teachers are forced to become mediators between students and their cellphones. Staff have reached their limit with their relaxed technology policies from the previous years and are seeking stricter rules to help them do their job: educate their students.

“I think that this year, there’s a lot stricter cell phone policies across the building than there have been in the past because the frustration for us is just continuing to grow,” Mrs. LaRue said.

Teachers are frustrated when it comes to students overusing their cell phones, but this idea isn’t a topic that is unheard of. Students have been told to not use their phones in class for years, yet why are stricter rules coming back with harder backlash than years previous? Maybe because we grew stronger connections in a time of need during our years of isolation and now we’re being forced to rip a bandaid off and join the life we ​​used to live.

Students and teachers’ alike struggle to separate from their virtual world during the school days. Contrastingly, students are more interconnected with their phones and rely on them for most forms of communication. They use a wide variety of social media platforms that make students stressed by having to balance their time between each to check for updates. Ally Brower had these challenges throughout the school day.

“ I keep Snapchat on no notifications at all times because I find myself getting on the app way too much,” Ally Brower said.

Everyone is transitioning to a renewed environment that has been thrown at us this year, and taking away the support of our cell phones is a small yet important step we need to take. We are all struggling to get to the work ethic we once were at, so maybe we should all hit do not disturb for the sake of our teachers who “like to teach and want to impact students’ lives. But when students have their phones in their faces, it’s hard to do,” Mrs. LaRue said.

Say What? Listening to Aids Accessible Over-the-Counter for as Low as $199, and With out a Prescription