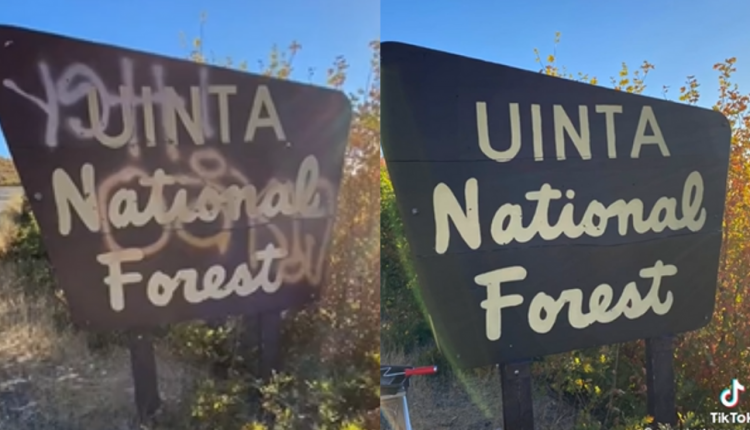 The video of a Provo resident’s service goes viral for all the right reasons.

Quinn Peterson recently posted a video on TikTok painting over graffiti on the Uinta National Forest sign in Provo Canyon.

“It’s excellent. It’s really exciting how much positive feedback the video has received, “said Peterson of the response he has received to the video.

Peterson told 2News that he actually painted the video of him in the fall of 2020 over the graffiti on the sign, but he’s new to TikTok and wanted to see how well the video would fare on the short-form video-sharing app.

Peterson said he went up Provo Canyon with his wife last year to hike in the area. Once up the canyon, Peterson and his wife came across the graffiti covering the sign of the Uinta National Forest.

“I thought, ‘Oh man, this is so frustrating, I wish I could do something about it,” Peterson said after discovering the vandalism.

Peterson said he reached out to the National Forest Service in his area to see what action he could take to help, but couldn’t find a clear answer.

Then Peterson took matters into his own hands.

“I got down one dead end street after another and no one knew what to tell me, so I just Googled ‘what are the colors of National Forest signs’ and then took that information to the Sherman Williams,” said Peterson, adding “They mistook it for me and I went up there and repainted it.”

The video, which already has over 100,000 views on TikTok, shows a time-lapse of Peterson using the color-coordinated paint to cover up the graffiti on the sign.

Peterson said it took him a little over an hour to complete the painting.

After the video was released, Peterson said he finally heard from the National Forest Service, who were pleased with their actions.

“I think it’s so frustrating how many times we look at something and think, ‘Oh, I wish this was better’ and then never think about it again,” said Peterson.

When asked if his video would lead to other relief services, Peterson added, “I hope people feel encouraged and encouraged to help people or things that clearly need that help.”