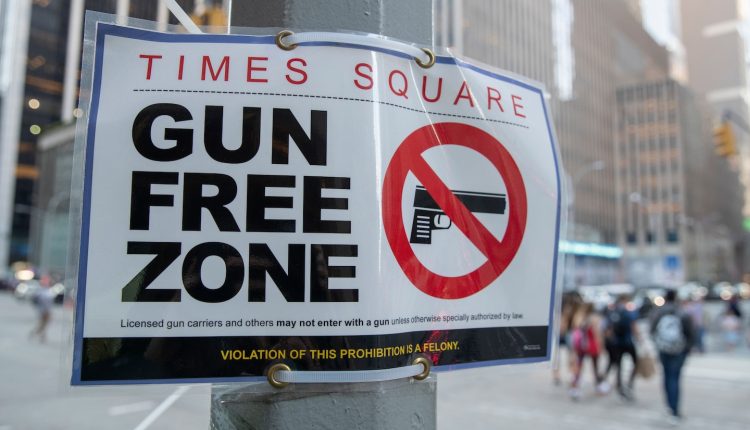 New York State can’t prohibit people from carrying guns at summer camps because — get this — there weren’t any similar restrictions in place at the time the Constitution was written.

Of course, there weren’t any summer camps back then, either. But such is the blinkered, history-focused approach to gun regulation imposed by the Supreme Court’s conservative majority earlier this year and applied last week by a federal judge to block the state’s new gun law, at least temporarily.

Nursery schools and other educational institutions can be deemed gun-free zones — but not day-care centers or other licensed child-care programs. It’s your constitutional right to pack a pistol in crowded Times Square.

Oh, and New York can’t require those applying for concealed carry permits to provide lists of their social media accounts for the previous three years because, said US District Judge Glenn Suddaby, “an insufficient number of historical analogues exists.” This is originalism as parody.

So much for the belief that the people, through their elected representatives, should be able to make such policy choices for themselves. (Oh, wait, that was abortion rights.) When it comes to guns, the Constitution tells the people that their ability to protect themselves against gun violence is limited by what federal judges, posing as amateur historians, can dig up about Revolutionary era statutes .

It didn’t need to be this way — even if you believe, as the Supreme Court concluded in 2008 that the Second Amendment protects an individual right to bear arms.

In its 5-4 decision in District of Columbia v. Heller, the court cautioned that “nothing in our opinion should be taken to cast doubt on longstanding prohibitions on the possession of firearms by felons and the mentally ill, or laws forbidding the carrying of firearms in sensitive places such as schools and government buildings.”

Indeed, in the years after Heller, courts more often than not upheld gun laws challenged under the Second Amendment. The federal appeals courts considering the issue unanimously concluded that gun regulations should be tested not just by history and tradition but also by whether the infringement was justified under the circumstances — what was known as means-ends scrutiny.

Then came new conservative justices, who imposed a more stringent, unyielding test: What does history dictate? Specifically, the 6-3 majority asked in New York State Rifle & Pistol Association v. Bruen, is the challenged law grounded in “this nation’s historical tradition of firearm regulation”? No matter that we live in the modern age of “ghost guns” and 3D printing, when owning a gun may mean wielding an assault weapon, not shouldering a musket.

The results have been predictable—and, for those who believe in reasonable gun regulation, grim.

The courts are just getting started in responding to Bruen, so maybe — maybe — things will settle down. Suddaby’s order, which will be appealed, seems particularly obtuse and tilted against any restriction.

After citing a raft of laws prohibiting guns in schools, Suddaby, a George W. Bush appointee, offers up this bit of non-reasoning: “However, the Court cannot find these historical statutes analogous to a prohibition on ‘summer camps.’ ”

Seriously? The court said in Bruen that “analogical reasoning requires only that the government identify a well-established and representative historical analogue, not a historical twin. So even if a modern-day regulation is not a dead ringer for historical precursors, it still may be analogous enough to pass constitutional muster.”

But analogous enough is in the eye of the beholder, and many of those beholding are named by Republican presidents. In the end, how history applies will be up to the justices — and their track record here is distinctly unimpressive: History matters when it’s on the side they’d prefer to win, and is discarded when that proves inconvenient to the desired outcome.

Justice Stephen G. Breyer, dissenting in Bruen, warned of precisely this problem. “At best, the numerous justifications that the Court finds for rejecting historical evidence give judges ample tools to pick their friends out of history’s crowd,” he wrote. “At worst, they create a one-way ratchet that will disqualify virtually any ‘representative historical analogue’ and make it nearly impossible to sustain common-sense regulations necessary to our nation’s safety and security.”

Not even four months later, Breyer’s warning looks prophetic, and common-sense regulations look to be in grave jeopardy.

Twitter, Musk lawsuit is paused, however sale could also be free speech victory