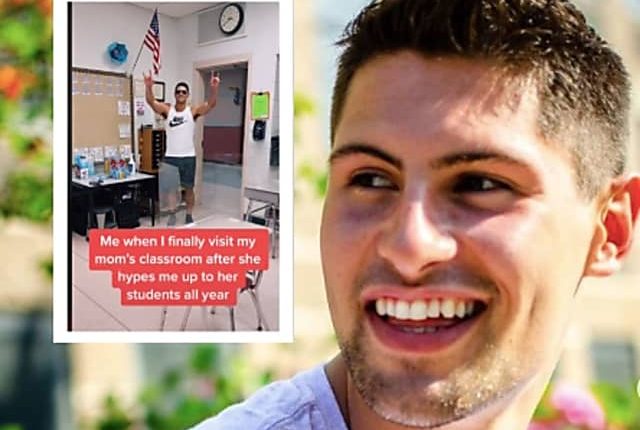 A North Jersey college student hopes to be one of the brighter lights in the TikTok community.

Liam Cassidy downloaded the video sharing app first as a pastime during quarantine and started making his own videos shortly afterwards.

It didn’t take long for them to go viral.

“Everything that goes on in my head, I try to take advantage of,” said Cassidy, a 21-year-old Montville native and PhD from Seton Hall University.

“I have a note page on my phone and I just add it to it with whatever fun things I can think of.”

He later translates these ideas into videos.

The latest video to go viral is one he has, well, worked on all his life.

Cassidy’s mother has taught Pompton Plains Elementary School for almost 25 years. And of course she tells her students about her son every year.

And every year when Cassidy walks into his mother’s classroom to meet her kids, they freak out.

“I come in and it’s like, these kids really think I’m the coolest person on planet earth,” Cassidy said with a laugh. “It’s a feeling I’ve known all of my life, and I just finally pulled the trigger.”

The video – a reenactment of Cassidy’s first meeting with his mother’s students –– had over 107K likes and 927K views from Tuesday morning.

Cassidy first downloaded TikTok at the beginning of the 2020 quarantine, but says it has since become a serious hobby of his.

“TikTok allows me to develop a creative side that I might not otherwise have access to,” said Cassidy, whose goal is to become a physical therapist and work with high-profile athletes.

“It gives me another level of meaning to be honest.”

One of the first videos that took off for Cassidy was one that he did Posted last March, when he encountered “Survivor” candidates playing spikeball in Lavalette.

To Cassidy – a huge “survivor” fan hoping to be on the show – TikTok meant a lot.

But what means even more to him than showcasing celebrities, he says, is a force of positivity himself.

“There are a lot of people in the app who create characters and add their own touch to certain things,” said Cassidy, an RA on the SHU campus. “I just see myself as a relatable character for a younger age group.

“My goal is to get more positive content out and keep people going. A lot of videos stand out because they achieve a different level of complexity and positivity, ”he said. “I think I can make them a fun way to catch fire.”

His vision for future videos is simple: funny and understandable.

“It’s just a great feeling because when you know that what you think about is valued,” he said.

“I know I’m not crazy about the others out there, but I hope to get there and keep coming out with things that people like and relate to.”